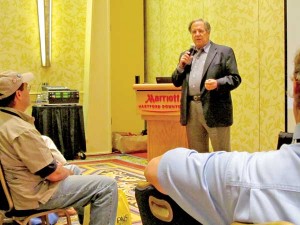 HARTFORD, CONN. – At a packed room of Airport Support Network (ASN) volunteers at the AOPA Summit in Hartford, Ct., September 23, 2011, AOPA President Craig Fuller announced that the association is creating a new regional manager program as part of its ongoing efforts to strengthen its presence at the state and local level.

In the first significant change in its field representation program in decades, AOPA will create a new team of seven full-time regional managers, whose focus will be on building government relations and strong local aviation communities. To augment the efforts of these regional managers, AOPA will refocus its existing regional representative program on promoting and supporting aviation-related events.

“For many years, our regional representatives have been the face of AOPA to most of the aviation leaders and government officials outside of Washington, D.C.,” said Fuller. “Their commitment to our work, their record of service to aviation, and their achievements on behalf of our industry are remarkable. But the world has changed, and so have the needs of our members. Increasingly, state and local governments make decisions that affect our airports and our flying. Full-time challenges demand full-time engagement.”

In addition to representing AOPA member interests with state and local government officials, AOPA’s new regional managers will play an important role in the association’s efforts to stimulate and encourage greater involvement among pilots and aviation enthusiasts nationwide.

“In our experience, one of the best ways to promote and protect general aviation is for members of the aviation community to get engaged in support of our freedom to fly,” said Fuller. “Together, our regional managers and representatives will give us more community-based resources to deploy in those efforts.”

Fuller noted that 30 state governors have signed resolutions showing the importance of general aviation. “As governors become competitive in trying to attract business to their states, they will support general aviation,” he said.

In other news, “Stronger Together” is the new slogan of EAA and AOPA. In the future, members of both organizations can expect to see more collaboration between EAA and AOPA at the local level, said Fuller. “Currently, we only collaborate at the national level.”

Greg Pecoraro, Vice President of Airports and State Affairs at AOPA, was on hand to answer questions about the seven new regional manager positions being created. Pecoraro manages AOPA’s field representation and grassroots activities, including the 12 current regional representatives, and the seven regional managers to be hired in the coming months.

Joey Colleran, Director of AOPA’s Airport Support Network, briefed volunteers on a model being developed that will encourage stronger airport groups by creating a social network at each airport. The model will build a stronger affiliation with AOPA and an organized group for ASN volunteers. Whatever model AOPA comes up with, Colleran and Pecoraro said that it will be flexible, and will engage members.

Bill Dunn, Vice President of AOPA’s Airport Advocacy, announced that AOPA’s highest award, the “Sharples Award,” would be going to Dr. Robert Larkin, a county commissioner in Washoe County, Nev., and an Airport Support Network volunteer at Reno-Tahoe International Airport (RNO). Commissioner Larkin was honored for his work to ensure that general aviation would continue to have access at RNO. The Laurence P. Sharples Perpetual Award is presented annually to an individual who has made significant contributions to the advancement of general aviation, and is named in honor of AOPA’s first chairman of the board.

Dunn noted that what members read in AOPA Pilot magazine and online is a smidgen of what goes on during the year. “There’s usually about 200 issues going on at the same time,” said Dunn.

Sean Elliott of EAA Government Relations, and his counterpart at AOPA, Craig Spence, work with the Transportation Security Administration (TSA). Elliott said that they are seeing more and more border agents creating their own policies and not following national policy. Temporary Flight Restrictions (TFRs) have also become a real problem, especially when the President of the United States takes a train trip and an entire region is locked down to general aviation.

Joey Colleran wrapped up the meeting by announcing the recruitment of 600 more Airport Support Network volunteers over the past 18 months, reaching a total of 2400 volunteers. The goal continues to be one ASN volunteer for every public-use airport in the U.S. Persons interested in becoming an ASN volunteer may email Colleran at Joey.Colleran@aopa.org, or call 800.USA.AOPA.