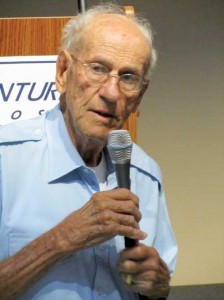 The Corben Baby Ace featured on the cover of the May 1955 issue of “Mechanix Illustrated” displayed overhead in the Founder’s Wing.

OSHKOSH, WIS. – EAA members were invited to celebrate EAA Founder Paul Poberezny’s 90th birthday on September 11, 2011 at the “Founder’s Wing” of the EAA AirVenture Museum. Poberezny officially turned 90 years young on September 14, 2011 – a special moment in aviation history in Wisconsin, the Midwest, and the world! The last 90th birthday celebration at Wittman Regional Airport was in 1994 when noted inventor, air racer, and longtime airport manager, Steve Wittman, turned 90. Poberezny was a featured speaker at that event.

EAA members who flew in were invited to park their aircraft at the ConocoPhillips Plaza on the convention grounds, which appeared strikingly empty, compared with the one week in July each year when hundreds of thousands of people and 10,000-plus aircraft come together for EAA AirVenture.

Welcoming guests to the luncheon was EAA President Rod Hightower, who spoke of Poberezny as the “pathfinder” for many members. Hightower said that Poberezny had the dream of creating an aviation organization for aircraft builders and restorers, and let others dream with him.

A number of friends were invited to share stories they have of Poberezny, including Louis Seno, president and CEO of Jet Support Services, Inc. (JSSI) in Chicago, Illinois. Seno spoke of the “Corben Baby Ace” displayed from the ceiling of the Founder’s Wing with the name “Mechanix Illustrated” painted on both sides of the aircraft. Poberezny painted the name of the magazine on the plane, which appeared on the cover of the magazine’s May 1955 issue. The feature article in that issue featured Poberezny, who built the plane, the Experimental Aircraft Association, and the homebuilt aircraft movement.

Lou Seno, Sr. read the article, joined EAA, and decided to likewise build a Corben Baby Ace, which was flown between 1961 and 2005. The Seno family has since placed the aircraft on display at the “Vintage Wings & Wheels” Museum in Poplar Grove, Illinois.

Retired United Airlines Captain Verne Jobst, who has held many volunteer positions within EAA, including flying EAA’s “Spirit of St. Louis” replica on tour between 1977-88 to commemorate the 50th anniversary of Lindbergh’s flight across the Atlantic Ocean, spoke of his friendship and firsthand experiences flying with Poberezny.

Jobst said to the crowd, “none of us would be here today if it had not been for Paul Poberezny.”

Jobst commented on Poberezny’s skill as a pilot: “Paul can literally fly anything, and do it right the first time, including once landing a DC-8.”

Poberezny then spoke to the group of friends and admirers: “You cannot accomplish much if you don’t like people,” said the elder statesman who has long felt that he has learned more about people than about airplanes during his career.

Poberezny and his wife, Audrey, and a group of friends started the organization in the basement of their Milwaukee, Wisconsin home in 1953. Through the decades, the organization expanded its mission to include antiques, classics, warbirds, aerobatic aircraft, ultralights, helicopters, and contemporary manufactured aircraft. Today, EAA’s fly-in convention, EAA AirVenture, is a focal point for general aviation in the world.

Poberezny said: “It’s been a wonderful life… the years sure have gone by fast. I look forward to the next 90. I think I will make a 180.”

Poberezny recognized both former and current EAA board members, volunteers and his family for making EAA what it is today.

“I idolized those who flew and maintained their own aircraft,” Poberezny noted. “I guess that has been my life’s work.”

The Founders’ Wing of the EAA AirVenture Museum was open to all to view the many artifacts accumulated over the years, including the original desk used by the Pobereznys when they started the organization.