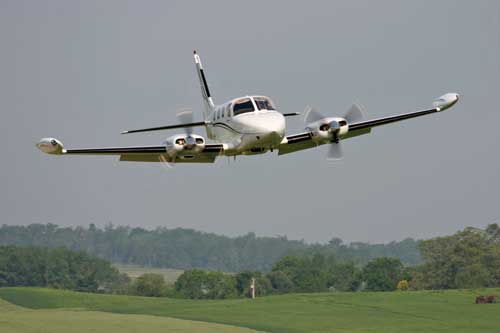 Flying for a corporation has its advantages and disadvantages. Pilots usually have stability and job security with a corporation that tries to get their employees home each night, thanks to the company plane! But for the pilot, hours of excitement can be matched with hours of boredom sitting around an FBO, waiting for passengers to return from meetings. 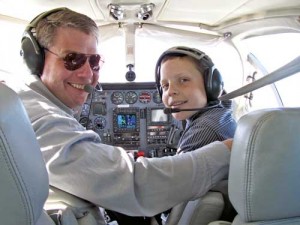 Randal Mack with his son, Andrew.

Randal Mack of rural Dane, Wisconsin, is the pilot for the architecture and engineering firm, Mead & Hunt, Inc., a position he has held since his father, Rollie Mack, retired from the company in 1999. 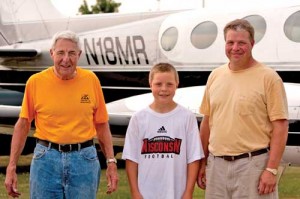 In 1979, Mead & Hunt purchased their first aircraft, a Cessna 310Q, and Randal’s father was their first pilot. The company flew its 310 for 25 years and moved up to the Cessna 340 in 2004. While the company has considered moving up to a turboprop, the 340 serves their current needs very well.

Randal flys the 340 from its base at Middleton Municipal Airport-Morey Field in Middleton, Wisconsin, to points in Minnesota, Iowa, Michigan and throughout other parts of the Midwest. Mead & Hunt has another company plane, a Cessna 182, and a pilot covering the West Coast offices. 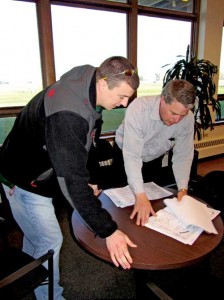 Randal Mack meets with one of his coworkers while on the ground at Minneapolis-Flying Cloud Airport before transporting other Mead & Hunt employees from the Minneapolis office to Cedar Rapids, Iowa.

No one appreciates air transportation more than a firm that specializes in airport development. Good airports are what Mead & Hunt builds and what they depend on to meet with their clients – airport officials and representatives of municipalities.

As a youngster growing up, Randal would spend weekends at the airport with his father washing the company plane, and assisting him with routine maintenance. He hoped to one day fill his dad’s shoes, or fly for another corporation in the Madison area, but he took nothing for granted. He obtained his degree in Civil Engineering at the University of Wisconsin in Platteville in 1992, so he could have a backup plan in the event a flying career did not pan out.

Like his father before him, Randal has earned his Commercial Pilot Certificate, and Multi-Engine Land and Instrument Ratings – all at Morey Airplane Company in Middleton, Wisconsin.

I had the opportunity to fly with Randal recently and observe not only his piloting skills, but also what being a corporate pilot entails, since this was once my career goal.

On the morning of our departure from Middleton, Randal opened the hangar door and towed out the 340 using a small utility tractor. He then boarded two members of their architectural team and a member of their historic preservation group, enough coffee for the flight, and a box of rolls and donuts. No one could ask for more! We were in the air by 7:00 a.m. sharp, with a list of appointments and travel destinations beginning in Minneapolis.

Our flight to Minneapolis-Flying Cloud Airport was glassy smooth, compared with the day before when Randal experienced some nasty weather returning from Cheboygan, Michigan. Like all pilots, Randal knows his limits, and the weather he encountered was within those limits.

That’s one characteristic Andy Platz, Vice President and Group Leader of Aviation Services at Mead & Hunt, likes about Randal, and liked about his father before him. “Live to fly another day!” is their motto. Keeping their passengers safe and comfortable is their number one priority.

Randal and his wife, Karen, have two children – Hannah, 14, and Andrew, 12. Andrew happened to be flying with us that day, as it was “Bring Your Kid To Work” day. Considering the math, geography, business and engineering covered on this flight, Andrew’s educational experience that day had to top those of his fellow classmates.

Because Andrew was the lightest person onboard, much of his flying was done from the rear seat, because of weight and balance requirements. At least that is what his dad told him. Andrew has flown with his dad enough that he recognized when the engines on the twin were not in sync with one another, but also noticed when they were, which was most of the time. All of us onboard wondered if Andrew would someday become the third generation pilot at Mead & Hunt. It is entirely possible.

You know you are flying with a professional pilot when his flying techniques are seemingly flawless; his radio transmissions with ATC are smooth, precise and crisp; and his confidence is built on experience in actual instrument conditions.

Randal said that most flights are less than two hours in duration, but like today, there are usually additional destinations with other satellite office personnel to transport to other locations.

Each flight is coordinated to maximize company staff time with their clients for project meetings.

Flights are scheduled based on need. When company employees and engineers request a flight, Randal schedules them on his Microsoft Outlook calendar. That way, everyone in the company can view the date, time and destination so they can combine their trips to the same or nearby location.

Scheduling this way maximizes both aircraft and personnel time; and going by air to many destinations, is the most cost-effective and expedient way to transport people.

All three employees who were onboard from Mead & Hunt’s corporate headquarters in Madison, Wisconsin, disembarked in Minneapolis.

While the plane was being fueled at Flying Cloud, Randal met with one of his coworkers from Mead & Hunt’s Minneapolis office to go over plans and cost estimates for an airport project in Minnesota. Randal had been working on construction quantities and doing a plan review during the preceding two days when he was not in the air. Randal continually balances his engineering workload with his piloting duties, so he can keep his attention on flying the airplane when duty calls.

Three members of the airport planning and engineering staff from the Minneapolis office then boarded the aircraft for a flight to Cedar Rapids, Iowa. We laid over in Cedar Rapids for about three hours, but thanks to laptop computers and the Internet, the crew – Randal, Andrew and myself – kept busy. Two of us had office work to occupy our time, and the other one had homework!

Once the meeting in Cedar Rapids was completed, we flew back to Minneapolis to drop off the staff members and pick up our original passengers for the return flight to Middleton.

We departed Flying Cloud for home on a planned route that took us around Minneapolis-St. Paul International Airport, a route Randal knows well. We also worked our way around some cloud build-ups, but the flight was smooth all the way to touchdown.

We taxied up to the corporate hangar and lowered the cabin door. The employees got out and quickly drove homeward while Randal fueled up and readied the 340 for a flight the next day.