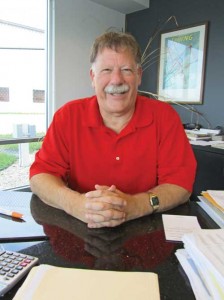 “Folks who have known us for a long time ask, ‘Did you ever envision you would grow this big?’ And I answer, ‘Yes!’” says Jeff Baum, President/CEO of Wisconsin Aviation, Inc. with locations in Watertown, Juneau and Madison, Wisconsin.

“In 1981, we only offered flight training, limited charter (single-engine aircraft and one light twin—a Cougar, no less!), hangar rental, and avgas—no jet fuel! Times were really tough with 21% interest rates, a terribly declining economy, and air traffic controllers on strike and subsequently being fired. But when you start at the bottom, there is nowhere to go but up!

“One thing we did have back then was fun. Fun flying, fun working at the airport, fun with our customers, and fun hanging out with airplane people, and fortunately, that has not changed… We still have fun! 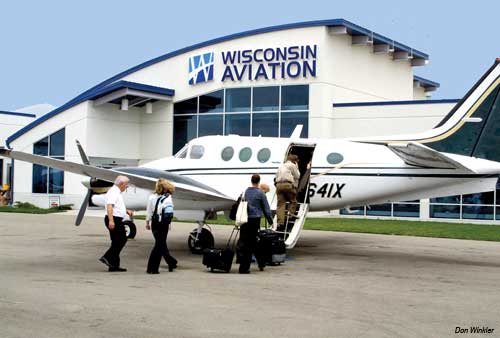 “We started adding airplanes to our fleet: Navajos, 414s, then Conquests, and finally Citations. We added runway length, hangars, jet fuel, and maintenance. We added locations, too: Dodge County Airport in Juneau, Wis.; the airport at Milledgeville, Georgia; and Dane County Regional Airport in Madison, Wis.” The FBO in Georgia has since been sold.

After graduating from the University of Wisconsin-Whitewater in 1975 with a Masters In Business Administration, Baum, who grew up in Milwaukee and near Oconomowoc since the age of 12, worked as the assistant to the chancellor of University of Wisconsin-Whitewater from 1975-79 and taught Finance in the College of Business from 1976-83. While at the university, Baum started flying and instructing at the Rock River Flying Club in Fort Atkinson, Wis. That is when the flying bug really bit Baum, and he decided to work full time at “Watertown Aviation” at Watertown, Wis. The company failed, but Baum picked up the slack and established “Air Watertown,” which became “Wisconsin Aviation Activities,” until the corporate name “Wisconsin Aviation” became available.

Baum can oftentimes be seen greeting customers as they disembark their aircraft.

In Watertown, he will often pick up the unicom and personally greet pilots to the pattern, or thank them for their business when they leave. He has memorized most, if not all, of his customers’ aircraft tail numbers.

At both Watertown and Juneau, staff is trained to always say: “Welcome to Watertown,” or “Welcome to Dodge County Airport.” And the ramp crew at Madison is always on the ready, listening to the tower and ground control frequencies, and on hand with batons to usher in everything from a 152 to a 757. And it does not matter if it is a presidential candidate, rock star, or mom and dad with the kids. At Wisconsin Aviation, all customers literally get red carpet treatment.

Wisconsin Aviation, Inc. has grown from the original two partners in 1981 (Jeff Baum and Pete Schoeninger) to 140 employees, and Baum says that his company could not serve its large customer base without them. But he recognizes the complexities of having employees as well, and the responsibility of providing a living wage and health insurance, unemployment and workman’s compensation insurance, and meeting state and federal employment regulations. Regulations, says Baum, are the greatest threat to businesses, and yet businesses are essential to the economic wellbeing of any nation.

“Employees can be a blessing, but they can present some concerns for an employer, as well,” said Baum. Many of Wisconsin Aviation’s employees have been with the company for 20 years or more – an indication that Baum hires the best people he can find, and he treats them well.

Baum recognizes opportunity when he sees it. Just before our interview, he bid a group of student pilots from France a fond farewell, and he hopes to expand Wisconsin Aviation’s foreign outreach in 2012.

“Hundreds of foreign visitors attend EAA AirVenture-Oshkosh each year, and flying is cheaper in the United States than abroad,” said Baum. “Providing flight training and aircraft rental anywhere in Wisconsin prior to, during and following AirVenture would create tourism, economic development, and more pilots. The potential to do great things is there.” Baum would like to see the Wisconsin Aviation Trades Association (WATA), the State of Wisconsin, and the Experimental Aircraft Association (EAA) work together on expanding this outreach program.

How Many FBOs Is Too Many? 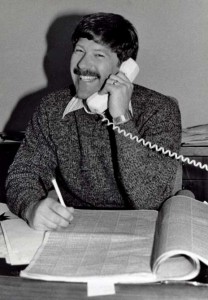 Jeff Baum in the early years.

Wisconsin Aviation, Inc. is the sole fixed base operator at Dane County Regional Airport in Madison, Wisconsin, and Baum says that there is a reason for that. There were two fixed base operators in the boom years of the 1960s and ’70s, and one company eventually gave way to the larger FBO shortly after Wisconsin Aviation, Inc. purchased the assets of Four Lakes Aviation in 1994. “Significantly larger airports than Madison can support more than one FBO. It all depends on the number of based aircraft,” says Baum. In addition to serving general aviation, Wisconsin Aviation has the fueling contract for the airlines, which helps to pay the bills, but there is slim profit margins.

Unlike some larger flight center chains that are often accused of price gouging, Wisconsin Aviation, Inc. keeps rates for both 100LL and Jet fuel affordable to attract business, and keep general aviation affordable for the little guy. And when it comes to fuel prices, Baum is as confused as his customers as to why the price at the pumps for auto fuel and the price of 100LL at airports do not rise and fall simultaneously. Baum noted that the oil industry pretty much has GA over a barrel because the demand for 100LL is so low compared with auto fuel.

Wisconsin Aviation is a “flight-based” full-service FBO. Maintenance facilities and hangar rental at Madison and Watertown, and avionics sales and service at Madison, complement the flight training and charter departments. Wisconsin Aviation, Inc. is a service center for Cessna, Piper, Cirrus and Daher-Socata. The Wisconsin Aviation fleet consists of between 50-60 aircraft – most they own, but some are on leaseback, including several Cessna Citations.

“There are no shortcuts or magic wands (in the FBO business),” said Baum. It is a lot of hard work, but Baum has finally found a balance between work and his personal life. Eighty-hour, seven-day workweeks, once consumed his life, until a bout with Leukemia in 1992 served as a reminder to slow down. Baum now finds more time for his family, and he bought a lake cottage near his home in Watertown where he and his wife, Krys, can relax on weekends.

Jeff and Krys have one daughter, Jenifer, who graduated from the University of Minnesota in 2009 with a major in Kinesiology. Jenifer shows no signs of wanting to get into the FBO business, but she may establish a chiropractic practice when she completes her education.

Unlike traditional “ma and pa” FBOs, Krys Baum specializes in human resource development in the business, and her path seldom crosses Jeff’s during the day. They both split their time between the three locations. Krys is also the facilities manager at Watertown.

Baum has a modest office in Watertown, and a modern, all-glass enclosed office in Madison, which faces the ramp. When a private jet or turboprop taxied down Taxiway Charlie towards Baum’s office during our interview, I said to myself, “turn right, ‘Song Bird,’ turn right,” and it did.

With three distinct operations in both rural and urban settings, Baum relates differently to the different airport commissions. At Watertown and Juneau, Wisconsin Aviation has the airport management contracts, and Baum and his staff work closely with the airport commissions of the City of Watertown, and Dodge County in Juneau. At Dane County Regional Airport in Madison, Baum works closely with the airport management, but also directly with the Dane County Airport Commission. There is an understanding of the value of airports at each location.

Involved & Respected By His Peers

Baum is a member of the elite “20 Group” of aviation business owners from throughout the country, which meets quarterly to discuss management styles and ideas. Also nationally, Baum has served on the board of directors of the National Air Transportation Association (NATA), and is on the Executive Committee of the Air Charter Safety Foundation Board of Governors.

One colleague described Baum as solid of an individual as they come. “Jeff is a rock amidst rapids in our industry, involved locally and nationally on aviation issues and initiatives.” Both state and national aviation leaders rely on Baum for advice and counsel.

The colleague went on to state: “I believe that Jeff’s greatest contribution to aviation is in promoting its benefits to individuals and businesses as a mode of transportation. Not a minute goes by that Jeff is not promoting flying and its many uses.”

What GA Is Doing Right & Not So Right!

Baum feels that the aviation community is doing a lot of things right in attracting young people to aviation through EAA’s Young Eagles program, but not enough time talking to the general public. He feels that fly-ins and air shows are good public relations tools for airports and operators, and help promote flying, but they alone are not enough.

“We (GA) should have billboards in every city in the nation encouraging people to either fly themselves or to utilize general aviation air charter, but we don’t. Programs like ‘GA Serves America’ have the right idea, but fall short,” says Baum, “because general aviation does not have the money for long-range campaigns.” But Wisconsin Aviation, Inc. does what it can to get the word out locally to the general public through hangar dances, flights on World War II bombers, “Honor Flights” for veterans, and a lot of local media contacts. Wisconsin Aviation has one employee whose sole responsibility is media and public relations. That’s how important promoting aviation to the general public is to Wisconsin Aviation.

Baum commented on how technology in aviation has changed over the past 30 years, and how there are winners and losers: “We progressed to RNAV, then LORAN, and now GPS,” said Baum. “Steam gauges gave way to glass panels, and visits to Flight Service Stations lost out to weather terminals, followed by computer screens and now iPods, iPads, and iPhones. Our office phones now follow us on the road, and text, emails, and tweets are waiting for us on arrivals.”

And while there are many neat products and aircraft on or entering the marketplace, he cannot see how all of them can make it.

“Garmin has obviously taken the industry by storm with the 400 and 500 series navcoms, but the 650 and 750 are slower in catching on than hoped for,” said Baum. “Obviously because the 400s and 500s are such good products, and the economy has an impact on sales, too.”

As for new jets coming on the market, Baum believes that the HondaJet, Piper’s Altaire and the Cirrus Jet will likely survive, but others – especially the upstart brands – will probably be more challenged. “We have already seen companies like Eclipse stumble,” said Baum, “and there is a limited market at this time. But I am optimistic that we will see more and more jets on the ramp in the years ahead.”

As for the future of his own company, Baum concluded by stating: “Wisconsin Aviation has grown into what I always felt it should be, and I see no reason to stop now!”

As the technology has changed over the past 30 years, the “coffee pot” in the lobby has been replaced with a “coffee maker,” but the aroma has remained the same at all three locations.

For additional information on Wisconsin Aviation, Inc., call 1-800-657-0761 or visit their website at www.wisconsinaviation.com.