Believe me when I say, I share your concern with having to buy yet another gizmo that costs a grand or more – either because the manufacturer does not support our existing equipment, or some bureaucrat in Washington writes a new “reg” that mandates an upgrade without first considering the cost to aircraft owners. But occasionally an upgrade makes sense, as in the case of installing a GPS nav/com, or more recently, a 406 MHz GPS Emergency Locator Transmitter (ELT) to replace the 121.5 MHz ELT. Satellites are no longer monitoring the 121.5 MHz ELT as they once were, leaving only handheld tracking devices to pick up their distress signal.

The Federal Aviation Administration has not yet required U.S. registered aircraft to install the 406 ELT, but Canada now requires them in all aircraft registered in that country, and has considered requiring that all foreign aircraft using Canada airspace be equipped as well. The day may come in which all aircraft will be required to have 406 ELTs worldwide. Required or not, if you want to ensure your chances of being found, you should seriously consider investing in a 406 MHz GPS ELT.

The major improvement in ELTs is the use of the COSPAS-SARSAT system for processing aeronautical emergencies.

COSPAS is an acronym for the Russian words “Cosmicheskaya Sistema Poiska Avariynyh Sudov,” which translates to “Space System for the Search of Vessels in Distress.” SARSAT is an acronym for Search And Rescue Satellite-Aided Tracking.

Early in its history, the Cospas-Sarsat system was engineered to detect beacon-alerts transmitted at 406 MHz, 121.5 MHz, and 243.0 MHz, the band commonly used by the military. Starting February 1, 2009, the Cospas-Sarsat system has been designed to detect only alerts transmitted at 406 MHz. This allows the system to be optimized for the increasingly sophisticated 406 MHz beacons, and avoids problems (including false alerts) from the less-sophisticated legacy 121.5 MHz and 243.0 MHz beacons. Many ELTs include both a 406 MHz transmitter for satellite detection, and a 121.5 MHz transmitter that can be received by local search crews using direction-finding equipment.

The difference between the 121.5 MHz and 406 MHz transmissions is that the 406 MHz transmission is digital, enabling the identification of the aircraft in distress, which facilitates search and rescue (SAR) operations with information on aircraft type, number of passengers, and type of emergency.

The certification of an ELT includes a range of severe mechanical tests, including resistance to flame; impact and crush tests; resistance to 100 G and 500 G shocks; watertightness; anti-deflagration; and extreme temperatures (-20°C to 55°C for more than 48 hours).

The shock detectors used in old automatic ELTs are the cause of a large number of false alarms. Major work has been done in studying aircraft crashes (study achieved by the Crash Research Institute), and evaluating the acceleration amplitudes involved. As a consequence, G-Switch specifications have been modified to optimize the accuracy of the crash detection.

Which Unit To Buy?

Equipment is being introduced onto the market at a rapid pace and continues to improve. I read up on the different 406 ELTs available, and spoke with a number of factory representatives who exhibited at EAA AirVenture, Sun ‘n Fun and the AOPA Summit to learn more. The unit that impressed me the most was the Kannad INTEGRA 406 AF-Compact.

The INTEGRA was first certified in Great Britain, and then in Canada, followed by the United States. It is the only ELT in the world, which offers an internal GPS and a 406 MHz integrated antenna, and it does not require an external power source.

This clever internal antenna offers a unique advantage in that, even if the aircraft suffers considerable damage on impact, the INTEGRA will activate automatically and still have the ability to transmit and send both aircraft identification data and GPS position. Thanks to the self-sufficient embedded GPS receiver, the INTEGRA will continue to transmit its lifesaving message, even if the crew removes it from the aircraft.

The INTEGRA can also be installed where an ELT is exempt from being mandated, and can be used without any external antenna subject to the fuselage construction. This feature offers great savings in procurement and installation costs.

Kannad, a company of the Orolia Group, specializes in the development of aviation distress beacons, which have saved thousands of lives for over 20 years. The Kannad range of products covers all aircraft. Kannad also offers tracking solutions dedicated to niche markets where environmental conditions require a high level of reliability and expert know-how for that specific market. 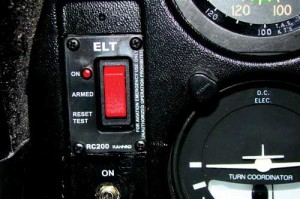 The remote control panel has a three-position switch (ON, ARMED, RESET and TEST) and a red light. The ARM mode is mandatory during flight. The ELT can only be turned off the “ARM” position when the ELT is removed, or if the aircraft is parked for long periods of time, or for maintenance.

The remote control panel in our Cessna 182 Skylane is located in the upper lefthand corner of the instrument panel – out of the way, but still within easy reach in the event of an emergency. The remote control panel is connected to the ELT via a three-wire bundle (not supplied). The outside antenna is mounted on the fuselage near the tail, and can either be a whip or rod-type, depending on aircraft speed.

The Integra can be activated either automatically when the crash occurs (thanks to a shock sensor), or manually using a switch on the transmitter itself, or on the RC200 remote control panel.

The Kannad Integra 406 ELT is designed to transmit on two frequencies: 406 MHz and 121.5 MHz. Again, the 406 MHz frequency is used by the COSPAS-SARSAT satellites for precise pinpointing and identification of the aircraft in distress; the 121.5 MHz is mainly used for homing in during the final stages of the rescue operations. Once activated, the transmitter operates continuously on 121.5 MHz with an output power of 100 mW. The modulation is an audio frequency sweeping downwards from 1420 to 490 Hz with a repetition rate of 3 Hz. During operations, a digital message is transmitted on 406.028 MHz every 50 seconds.

Orolia is a high-technology group specialized in precise Positioning, Navigation and Timing (PNT) through its five companies in which Kannad is one of them. Orolia is headquartered in Les Ulis, France with main offices in Neuchâtel, Switzerland; Rochester, New York; Basingstoke, UK; Portsmouth, UK; and Guidel, France.

Pete Halbauer, President of Skycom Avionics at Waukesha County Airport, Waukesha, Wis., expressed interest in the INTEGRA, and did the homework necessary to have it installed correctly in our Cessna 182. Since the INTEGRA was new on the market, Halbauer wanted to be able to train his technicians on the installation, and provide Kannad with feedback that would help other installers. Skycom’s lead installer, Tom Douglas, did the actual installation under Halbauer’s supervision. The feature Halbauer likes the most on the INTEGRA is the built-in GPS.

“If you go down, they are going to find you,” said Halbauer, which was reassuring to know.

To purchase and install a Kannad INTEGRA 406 GPS in your aircraft, contact Pete Halbauer at Skycom Avionics, Inc. at 800-443-4490 or email petehalbauer@skycomavionics.com (www.skycomavionics.com).