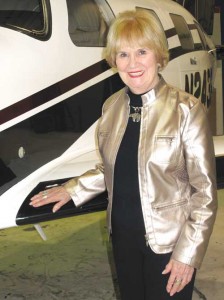 DES MOINES, IOWA – As a little girl, Dee Price, Vice President of Sales Administration at Des Moines Flying Service (DMFS) and Hondajet Midwest at Des Moines International Airport, always thought she wanted to learn to fly. She thought she would like to fly helicopters because “they were more safe,” but later realized how safe fixed-wing aircraft were as well.

After graduating from Osceola High School, Osceola, Iowa, in 1949, Price worked for Iowa Southern Utilities Company until she got married. She became a stay-at-home mom when her son, Steven, was born in 1951, and her daughter, Sue, in 1953.

In January 1957, Price took a position as a clerk with a state representative in the Iowa Legislature, a short-time job since the legislature met every other year from January until late April. Later when both of her children were in school, she started working full-time for Brown & Bigelow from 1957 to 1961, and then for the Iowa Independent Telephone Association in 1961 and 1962.

In the summer of 1962, Price had the opportunity to take a demonstration flight in a Piper Cherokee 160 with flight instructor, Willis Faux, at Des Moines Flying Service. “Willis had the ability to make you feel that you were actually flying the airplane during the demo, and I was bitten by the ‘flying bug,’” said Price. Price soon started taking flying lessons, flying mostly in the Piper Colt (PA-22-108) and the Piper Tri-Pacer (PA-22-150) after she got off work.

After about two weeks of lessons, a position opened up at Des Moines Flying Service working the front desk, and directly with the owner, Howard Gregory. She applied and did not get the job, at least right away. At the time, Gregory was on one of his trans-Atlantic flights to Europe, delivering an Aztec. When he returned from the trip, he found that no one had been hired to fill the position, and Price was called at home one evening and asked to again come in for an interview.

“The interview was rather unforgettable,” said Price. Gregory asked Price if she could type, and she could, but he insisted on her taking a typing test. She passed and started working at Des Moines Flying Service the day after Labor Day on September 4, 1962. At the end of Price’s first day on the job, she went flying in one of the company’s Tri-Pacers, and soloed for the first time.

As time went on, Price became more involved in the company, helping Howard Gregory with the record-keeping on airplanes ordered, writing letters, and making phone calls to their dealers. DMFS was a Piper distributor at that time, and had more than 20 dealers and flight centers.

In 1974, DMFS became a Piper Cheyenne sales center and Price got very involved in every aspect of aircraft sales, including ordering, submitting customer specifications to the factory, pricing out avionics and other options, preparing purchase agreements, and often making trips to the factory in Lakeland, Florida. Those duties continued on until 1984 when Piper ceased building the Cheyenne line.

In 1997, DMFS became a Pilatus dealer and Price’s duties were much the same as with the Cheyenne.

In 2008, DMFS became a HondaJet dealer and created the company “HondaJet Midwest,” covering 10 Midwestern states. Price has been doing much of the same sales administration for this aircraft as well.

Although Price will retire on December 31, 2011, after 49 years on the job, she looks forward to sharing in the excitement of the company’s first HondaJet delivery, expected in  2013.