CAF Red Tail Squadron – In Honor of the Tuskegee Airmen 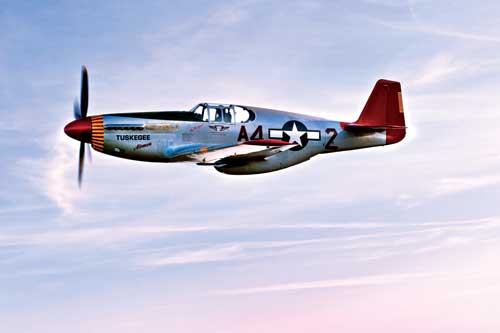 With the release of the motion picture “Red Tails” on January 20, 2012, more Americans are becoming aware of the contributions made by the Tuskegee Airmen during World War II, but the effort to educate people started with the “Red Tail Squadron” of the Commemorative Air Force (CAF), based at Fleming Field, South St. Paul, Minnesota.

A scene from the motion picture “Red Tails.”

The goal of the Tuskegee Airmen was to fight the Axis powers during World War II as pilots in the U.S. Army Air Corps. The squadron’s biggest obstacle was racial prejudice and segregation.

Once these young patriots were given the opportunity to train as pilots, they worked hard to be the best pilots in the corps.

The Tuskegee Airmen earned hundreds of citations, awards and medals for their wartime record, which was key to the U.S. military’s decision to desegregate in 1948. In 2007, the Tuskegee Airmen, as a group, were awarded the Congressional Gold Medal as an acknowledgment of their efforts and accomplishments.

The movie “Red Tails” is bringing a great deal of attention to the work of the all-volunteer Red Tail Squadron. The squadron was created in the mid-1990s to likewise honor the accomplishments of the Tuskegee Airmen. The squadron restored and maintains a P-51C Mustang, painted in Tuskegee Airmen colors with a red tail, and flys aerial demonstrations at air shows throughout the United States.

The CAF Red Tail Squadron’s “Rise Above” traveling exhibit at EAA AirVenture-Oshkosh 2011. The 53-foot custom tractor-trailer has sides that slide out to create a 30-seat, climate-controlled movie theater with a 180-degree screen. The outside of the tractor-trailer displays photos of the squadron’s Red Tail Mustang, and in itself, is a portable billboard.

In addition to their beautifully restored Mustang, the Red Tail Squadron placed a traveling exhibit on the road beginning in 2011. The traveling exhibit, called “Rise Above,” is housed in a 53-foot long semi-trailer that has been turned into a theater with a 180-degree IMAX-type movie screen with seating for 30 people. The climate-controlled theater shows an original film about the airmen and their role during World War II and beyond. The traveling exhibit accompanies the Mustang to air shows, but also make stops at schools, museums and other “off-tarmac” venues so students and others, who cannot attend an air show, can still learn about the Tuskegee Airmen. The traveling exhibit is sponsored by the Texas Flying Legends Museum based in Houston, Texas.

In the “Rise Above” film, Tuskegee Airman Col. (ret) Charles E. McGee plays himself. “Col. Mac” holds the U.S. Air Force record for most combat missions – 409 over a span of three wars. The film also features the story of the more than 14,000 other black men and women who trained hard to support the pilots. “Rise Above” was created by Emmy Award-winning filmmaker, Adam White, of Hemlock Films. Air show spectators and students may tour the traveling exhibit “free,” but donations are welcomed.

While the CAF Red Tail Squadron and its P-51C Mustang were not involved in the motion picture “Red Tails,” director/producer George Lucas was fully aware of the squadron’s efforts and came to see its “Rise Above” traveling exhibit at EAA AirVenture in Oshkosh, Wisconsin in July 2011.

The cast of the motion picture, “Red Tails.”

Hollywood filmmaker and director, George Lucas, who personally funded the production of “Red Tails” because he felt that the story of the Tuskegee Airmen needed to be told, is very much aware of the efforts of the Red Tail Squadron. Lucas personally toured the squadron’s “Rise Above” traveling exhibit during EAA AirVenture in Oshkosh, Wis., in July, and was impressed. He stated while his movie is the “dessert” (entertainment-wise), the Red Tail Squadron’s traveling exhibit is “the main entrée,” having a far reaching impact on youth. Actor Cuba Gooding, Jr., visited the traveling exhibit at the AOPA Summit in Hartford, Connecticut in September 2011. The Red Tail Squadron’s P-51C Mustang was not used in the movie, nor did anyone in the squadron work with Lucas on the film.

The history of the Tuskegee Airmen’s perseverance and ultimate success is the foundation for the six guiding principles of the CAF Red Tail Squadron’s educational mission: Aim High, Believe In Yourself, Use Your Brain, Never Quit, Be Ready To Go, and Expect To Win.

(L/R) CAF Red Tail Squadron pilots Doug Rozendaal and Brad Lang with the squadron’s P-51C Mustang at EAA AirVenture-Oshkosh 2011. Lang, whose own father was a Tuskegee Airman, is the current leader of the squadron.

The CAF Red Tail Squadron and the Don Hinz family held a premier of the motion picture “Red Tails,” January 20, 2012 at the Marcus Oakdale Cinema in the Twin Cities. The premier was coordinated by longtime CAF volunteer, LaVone Kay.

Don Hinz was the squadron’s leader up to the time of his death on May 29, 2004, when the Red Tail P-51C Mustang experienced mechanical problems during a flyby at the “Wings of Freedom: Salute to Veterans” air show at Red Wing Airport in Red Wing, Minnesota. The aircraft sustained major damage, but was meticulously restored to its original condition, thanks to donations over a period of several years. Hinz, who was also a pilot for Northwest Airlines at the time of his death, was inducted into the Minnesota Aviation Hall of Fame in 2007 for his work with the Red Tail Squadron.

The lobby of the Marcus Oakdale Cinema displayed information on the CAF Red Tail Squadron.

Some of those same Tuskegee Airmen featured in the motion picture “Red Tails” are also part of a mural called “Black Americans In Flight” that has been displayed at Lambert-St. Louis International Airport since 1990. The mural will be rededicated on February 16, 2012, and is located in the baggage claim area in Terminal 1.

The mural was painted by St. Louis artists Spencer Taylor and Solomon Thurman to highlight the contributions of African American achievements in aviation from 1917 to the space age. The Tuskegee Airmen are prominently featured in 75 portraits including Eugene Jacque Bullard, Benjamin O. Davis, Jr., Clarence “Lucky” Lester, and Wendell Pruitt, a St. Louis pilot who received a Distinguished Flying Cross after downing three planes and sinking a destroyer during World War II. Those who supported black aviators are also featured, including Eleanor Roosevelt and President Harry S. Truman.