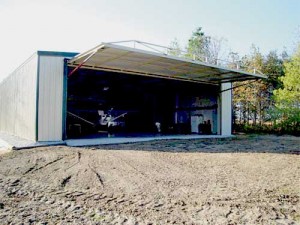 I researched over a year what I wanted to do. I met Dave Schweiss at the Florida ‘Fun in the Sun’ air show and both Dave and Mike at the big Oshkosh, Wisconsin show. After meeting the guys and looking more closely at their product, the choice was obvious. It simply was the best fit, the best design, the best door and in terms of value, the best deal. (And) everyone at Schweiss is first class, from the technical folks, to the shipping crew, to Julie, Dave and Mike in marketing. It’s a family affair that really does a professional job all the way around.”

Talking is Bob Dalley, an aviator from Waldron, Indiana, who works as an engineer with the Rolls Royce Corporation at their Indianapolis facility. A Purdue University electrical engineering graduate, 49-year-old Dalley has an eye for engineering excellence and quality. That’s why a 40’ x 13’ Schweiss hydraulic door now hangs on his 50’ x 70’ Heritage hangar on his country airfield about 30 miles south of Indianapolis.

“The ‘stoutness’ of the door was significant to my engineering eye,” said Dalley. He noted the steel used in the Schweiss doors, the quality of the welding, and the overall structural strength.

The empty weight of Dalley’s Schweiss door was about 1900 lbs. That bumped up to about 2600 lbs. with sheeting and insulation. His insulated hangar is sort of an “all purpose” building with a lounge area, wash bay, plus floor space for vehicles and other stuff. The primary occupant, however, is Dalley’s 1973 Citabria 7ECA, powered by a 115 hp engine.

“I push the button and see this huge door quietly open,” said Dalley. He acknowledged other options such as sliders and bifolds.

Dalley installed the door himself, using a forklift and help from his dad who used to be in construction before retiring. Schweiss worked with the building architect ahead of time to make certain all the structural components were in place, including the correct steel for the load.

Dalley’s airstrip is on the sectional charts so his field is cleared with the FAA. You sense the pride he has it. He rolls it every year. When he created it, he used a grader to make it perfectly flat. It’s well drained with adequate field tile. It can rain one day and the strip is totally functional the next day (www.Schweissdoors.com).