The conference began with a welcome reception and dinner in honor of Jim Coyne, President of the National Air Transportation Association (NATA), headquartered in Alexandria, Va. Coyne, who will retire at the end of 2012, represents the aviation trades before congressional committees, the Federal Aviation Administration, Transportation Security Administration, and other federal agencies. He works closely with NATA members across the country and the representatives of other aviation organizations, including the National Association of State Aviation Officials (NASAO), National Business Aviation Association (NBAA), Aircraft Owners & Pilots Association (AOPA), and Experimental Aircraft Association (EAA). In recent years, Coyne has worked to develop strong relationships with pro-business, pro-aviation governors and state legislators. Local aviation issues are equally important to Coyne, and he serves on his local airport commission. Coyne presented MATA members with a “Washington Report” following dinner on March 18th, and was one of three panelists who spoke on the topic of “Promoting GA To The General Public,” and the keynote luncheon speaker on March 19th.

Joining Coyne on the panel was Bill Blake of AOPA, and Christopher Roy of the Minnesota Office of Aeronautics.

Bill Blake is a Regional Representative with AOPA, and an active pilot, aircraft owner, and attorney. He flew OH23 and CH34 helicopters as a U.S. Army officer, is past chairman of the Greater Peoria Airport Authority, and the former executive director of the Illinois Aviation Trades Association (IATA). From 1992-99, Blake was the Director of Aeronautics for the State of Illinois, and served on the board of directors of the National Association of State Aviation Officials (NASAO). He accepted his AOPA appointment in 1999.

During the panel discussion, Blake described what the national aviation associations are doing to ensure the future of general aviation, and told attendees what they could do to help. “Use local star power in the same way as AOPA and other organizations have used national celebrities like Harrison Ford to talk to Congressional representatives about the benefits and importance of general aviation,” said Blake. Blake also suggested holding open houses at airports, looking for opportunities to speak before local civic groups, becoming a supporter of local non-aviation events, and developing a rapport with local media and making it easy for them to do positive stories on general aviation and the local airport.

Blake described how one airport manager and fixed base operator in Wisconsin has researched how Victoria Secret, Harley Davidson, and Gander Mountain have built product charisma and how he has applied these same principles to marketing aviation.

Blake then described how a southern Illinois airport actually saved its community’s industrial park, because new businesses would not locate there unless the airport stayed open and was improved.

Blake also described how the “Michigan Air Tour” has brought positive publicity to airports throughout the state, and has encouraged local politicians and the media to get involved.

Panelist Chris Roy began his career with the Minnesota Department of Transportation in 1992 in highway project development. Roy’s experience is in program management, project management, surveying, right of way acquisition, and design. He was appointed Director of Aeronautics in 2009, where he has overseen and provided direction for state airport system planning, commercial airline service, essential airline service, and FAA reauthorization. Roy is active in the National Association of State Aviation Officials (NASAO).

Roy stated that aviation has a $12 billion impact on the state of Minnesota through its network of 136 public airports. He described how he meets with 40 state representatives each year to stress the importance of aviation and airports in the state. “Some listen, others do not, but I meet with them each year regardless to keep them informed,” said Roy.

Roy went on to describe the State’s “Passport Program,” whereby pilots fly to at least 125 airports in the state to reach the highest level of participation. The “Passport Program” is all about maintaining pilot proficiency and using the Minnesota system of airports for business, recreation and tourism.

Panelist Jim Coyne reminded everyone that the Federal Aviation Administration (FAA) is no longer mandated to “promote” aviation, so this responsibility now falls entirely on the aviation community. He also noted that the world has created a “virtual world” with laptop computers, iPods and iPads, and encouraged attendees to promote flying as a way to experience the “real world!”

“We have to create a mindset that aviation is a way to experience the real world,” said Coyne, and that we must compete with other recreational activities, such as snowmobiling, boating and motorcycling.

“A national promotional campaign would cost $150 million a year, but local campaigns cost much less, and can be more effective,” said Coyne. “We need to decentralize our efforts, and with 5,000 public airports in the country, Washington is not the answer!”

The panel discussion gave way to Ron Adams and Jon Ziulkowski of Swift Enterprises of West Lafayette, Indiana, who discussed what they are doing to produce an “alternative fuel” for 100LL. “The company consists of 9 people trying to save the world,” said Adams.

Jon Ziulkowski is Vice President of Renewable Fuels at Swift Enterprises, and head of corporate flight operations. Ziulkowski is the creator of the Swift Fuel project, and holds associate, bachelor and master degrees in aviation from Purdue University.

Swift Enterprises was established in 2001 to create a biomass-derived, synthetic fuel called “100SF” that has been successfully tested in several aircraft engines. The fuel can be derived from a variety of feedstocks, from sugar beets to sorghum, so there is a range of suitable areas for production. 100SF contains no lead or ethanol, and so far, has shown to be a near straight switch for 100LL for most aircraft engines. Tests conducted by the FAA thus far have shown that an engine performs well and is in better shape than most engines running on 100LL. In addition, Swift Enterprises claims that 100SF provides an 8 to 15 percent increase in range based on the same volume of fuel over 100LL and produces fewer pollutants.

The next time you see a sign advertising cheap gas, ask the fixed base operator when they got the last load. Ziulkowski says the shelf life of 100LL is decreasing and can now be as low as 3 weeks. “And auto fuel is not the answer,” says Ziulkowski. The quality of auto fuel is supposedly decreasing, there is significantly less specification control when compared with avgas, and the ethanol now added to auto fuel may add a buffer to improve the octane rating, but deteriorates engine components, says Ziulkowski. There are 26 parameters for avgas, and only two parameters for auto fuel or “mogas.” 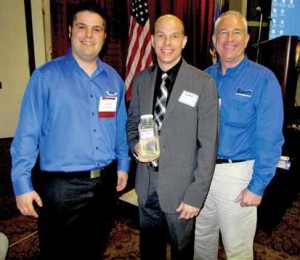 Swift Enterprises is looking to have 100SF certified within the next two years and competitively priced. ASTM International certifies all aviation fuels and not the FAA.

ASTM International, formerly known as the American Society for Testing and Materials (ASTM), is a globally recognized leader in the development and delivery of international voluntary consensus standards. Today, some 12,000 ASTM standards are used around the world to improve product quality, enhance safety, facilitate market access and trade, and build consumer confidence.

Returning to the podium as the keynote speaker, NATA’s Jim Coyne told a crowd of 400 aviation business men and women, and aviation technicians, how important they were to the air transportation industry, and that each and every one of them have to work with other professionals and general aviation pilots to promote the industry if it is to prosper. 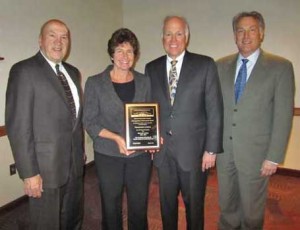 Following the luncheon, Dale Klapmeier, co-founder and CEO of Cirrus Aircraft, located in Duluth, Minnesota, presented the history of his company, which began in a small hangar at the Baraboo, Wisconsin airport in 1984, to give MATA members ideas on how they might market their businesses.

From the beginning, Cirrus Aircraft has been committed to the future of aviation, to smart safety and most adamantly, to innovation to break the barriers that have up to now prevented many people from owning an aircraft. The company manufactures the SR20 and SR22 all-composite piston and turboprop aircraft, and its Vision SF50 personal jet is currently under development. Cirrus has manufactured and sold more than 5,000 aircraft to date.

Schmidt discussed why MAC feels the minimum standards for operators need to be updated, what will be contained within the amended standards, and the process MAC will follow for their adoption. Schmidt welcomed dialogue on the topic to get feedback on the needs and concerns of the impacted commercial operators. 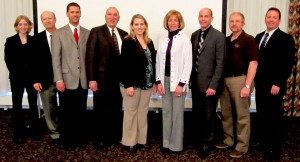 The annual meeting of the Minnesota Aviation Trades Association resulted in the election of new directors to replace vacancies created by Greg Reigel of Reigel Law Firm of Hopkins, Minn., and Mark Plummer of Allianz Aviation Managers of Eden Prairie, Minn. Both men served the organization for many years. Elected for 3-year terms to the 9-member board were Barb Wiley of Wiley Properties of Osseo, Minn., and Alison Hunter of NationAir Aviation Insurance at Flying Cloud Airport, Eden Prairie, Minn.

Barb Wiley grew up in an aviation family, and started her professional pilot career as a flight instructor and flying charter at Crystal Shamrock at Minneapolis-Crystal Airport in 1968. She graduated from the University of Minnesota with a degree in education and taught first and second grade for 3 ½ years. North Central Airlines hired her in 1974, where she achieved the rank of “captain” in the Convair 580, DC-9, Airbus 320, and Boeing 747 before retiring in 2005. Wiley Properties, which her father started in 1954, has rental units, including 100 hangars at Minneapolis-Crystal Airport.

Alison Hunter’s professional experience includes work as a flight dispatcher at Western Michigan University College of Aviation, an internship at Gerald R. Ford International Airport, and as a service representative at Northern Air, a full-service fixed base operation in Grand Rapids, Michigan. She is an active member of several national and regional aviation associations, holds a private pilot certificate and an instrument rating, and a Bachelor of Science Degree from Western Michigan University.

For additional information on the Minnesota Aviation Trades Association, refer to its website: www.mnaviationtrades.org.