With the summer flying season just beginning, I would like to mention some aviation safety seminars before continuing the topic on GPS and instrument flying in this column. Every two years, the FAA, Wisconsin Bureau of Aeronautics, and the staff at Volk Field sponsor an open house, a fly-in, and a safety program for pilots and the general public. As in past years, I was one of the speakers this year (June 2, 2012), presenting “Instrument Flying, Today & Tomorrow.”

This topic will be the core of my column in Midwest Flyer Magazine in the next several issues. It seems that I, like you, want to stay on top of technology, whether it’s our cell phones or our aircraft avionics. Since 1992, I have spent a small fortune on state-of-the-art avionics, computers, and cell phones that are now obsolete. I still have not yet removed the “Apollo Loran” from my Bonanza. This is mainly because it powers up and drives my altitude encoder; a new encoder is relatively cheap, but the cost of installation is twice of what the encoder costs. So, it will need to stay in the panel for a while until the next major upgrade. I am also the guy that just updated to the new I-phone 4s from the I-phone 4.

I mentioned in my last column that the Garmin 430/530s have been the most successful avionics nav/coms of modern time, and they are being replaced by the new Garmin 650/750 series of nav/coms. I have not yet flown these new units, but have played with them on the ground, and they are very cool. There is an application available for the iPad that is an excellent training device for the 750, and I had the opportunity to become familiar with the device. I believe the price for this application was $25.00. Garmin has added a lot of features to these boxes that have long been on my wish list for the 430/530, many of which were in my favorite box – the Garmin 480.  If you are thinking of purchasing either the Garmin 650 or 750 as an upgrade, there are two factors to consider. First, they are not a slide-in replacement for the 430/530, so plan on additional cost for installation. Second, are the reports from pilots who own them who say they can be difficult to program with the touch screen in turbulence, although the finger-rest feature is an excellent aid. 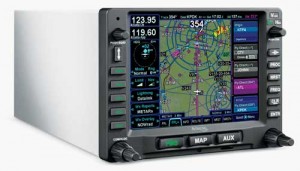 Avidyne is not new to the avionics world, and they now have introduced the IFD540 that is a direct slide-in replacement for the Garmin 530, saving the cost of rewiring the panel. The other positive feature is that Avidyne has a button and knob programming option for use in turbulence, as well as the touch screen for use in smooth air or on the ground. Complete functionality can be achieved with either programming method. I have had the opportunity to work with this unit in a simulator, and I am impressed. The Avidyne IFD540 is waiting for FAA approval and is not yet available for shipping. This will be the unit to watch, and I will write a review on it in a future issue of Midwest Flyer Magazine.

I will devote the second half of this column in this issue to flying on instruments using the GPS, with the main focus on the popular Garmin 430/530 series.

One of the areas that seem to confuse pilots is the purpose of the Omni Bearing Selector (OBS) button. This gets quite confusing as this button has two functions, and it depends on the situation or segment of flight as to what will happen.

The most common use of the OBS button seems to be associated with a missed approach, so we will discuss that first.

When doing any type of instrument approach, there is a point or an altitude that we must go missed if we do not see the runway or cannot land. To discuss how the GPS handles this, we will cover the Instrument Landing System (ILS) and other precision approaches first. 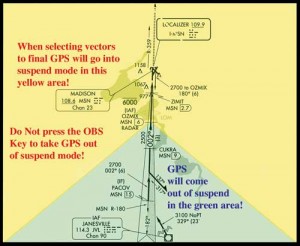 On a precision approach (one with a glideslope), the missed approach point is an altitude shown on the approach chart as DH or DA (Decision Height or Decision Altitude). Upon reaching this altitude, my sequence is “Power UP, Pitch UP, Positive Rate, and Gear UP if I cannot land. This is the point I go missed, but not what the GPS interprets as the Missed Approach Point (MAP). The GPS sees the MAP as the end of the runway or runway threshold, and displays it as a reversal of the to/from indicator on the Horizontal Situation Indicator (HSI) or VOR/ILS indicator, and then puts the GPS into a “suspend mode.”

Here is where I see so many mistakes made by pilots flying these boxes. The pilot believes that once the airplane is under control on the missed approach, he/she needs to push this OBS button. More than one fatal accident has occurred by doing this. The correct plan is to follow the initial part of the missed approach as shown on the approach chart before pressing the OBS button.

An example of a missed approach as read from the approach chart for the Dodge County (Wisconsin) Airport (KUNU) reads: “Missed Approach: Climb to 2800, then a climbing right turn to 3000 via BAE VORTAC-R302 To Rando Int /BAE 39.4 DME and Hold.” The OBS button should not be pressed until reaching an altitude of 2800 feet. If the OBS button would be pushed prematurely, say at 1500 feet, and a 2000-foot obstruction was to the right of the departure course and the pilot turned as directed by the GPS, there could be a disaster. Please note that pushing the OBS button takes the GPS out of suspend and sequences it to the next waypoint that is usually the holding fix.

Let me mention briefly another model of the Garmin GPS – the 480. This unit does not go into suspend, but detects whether the airplane landed or went missed. It projects the missed approach course if the aircraft went missed to the altitude specified on the approach chart. On the example I gave previously using the Garmin 430/530 and the missed approach at Dodge County Airport (KUNU), the 480 would detect the altitude and begin the sequence of right turn upon reaching 2800 feet. Using an autopilot with GPS steering, the airplane would fly the entire missed approach procedure. Now, that is pretty cool in my opinion.

There is one other instance that a pilot may get into trouble with the OBS button and that is using the Garmin 430/530 after selecting vectors to final and being vectored on a downwind leg by air traffic control (ATC). On the early non-WAAS version of the box, this was a major software glitch that was corrected on the WAAS version of these GPS’s. The pilot not understanding the GPS box can still screw this up by pushing the OBS button, thinking he must take the unit out of suspend mode. The scenario is as follows: When a pilot is told he/she will be getting vectors for the approach, he/she selects vectors to final (the proper thing to do). ATC is vectoring the pilot on the downwind leg to turn in outside the final approach fix to join the final approach course. The GPS unit goes into suspend mode, and the pilot hits the OBS button – the wrong thing to do. The GPS will then show a course direct to the runway, and the approach is in trouble. The GPS software has a safeguard and will automatically take the suspend mode off when the aircraft is within a 45-degree angle of the inbound final approach course and being vectored inbound.

I hope when flying an approach on your next instrument flight, these tips will be helpful. In the next couple of issues of Midwest Flyer Magazine, I will continue the topic of GPS use on approaches, clarify the “Missed Approach Point” on non-precision approaches, and the other use of that OBS button on the Garmin 430/530 boxes.

EDITOR’S NOTE: Michael “Mick” Kaufman is the manager for the Beechcraft Pilot Proficiency Program and a flight instructor operating out of Lone Rock (LNR) and Eagle River (EGV), Wisconsin. Kaufman was named “FAA’s Safety Team Representative of the Year for Wisconsin” in 2008. Email questions to captmick@me.com.