WISCONSIN DELLS, WIS. – Airport managers, fixed base operators, engineers and support service professionals came together May 7-9, 2012 at the Wisconsin Aviation Conference in the Wisconsin Dells to learn from – and network with – one another, and to recognize and strive for professional excellence.

Recognized for “Lifetime Service” was former La Crosse Airport Manager, Dan Wruck, who retired earlier this year. Wruck has served the aviation industry most of his life in many capacities including as a military helicopter pilot, search and rescue pilot, flight engineer, military aviation safety officer, air base commander, and as an airport manager. He has participated in many statewide activities to promote the betterment of aviation in Wisconsin, most recently in obtaining expanded radar coverage throughout the state.

Greg Stern of Mead & Hunt was recognized as “Airport Engineer of the Year.” Over the past several years Stern has managed the design of one of the state’s largest aviation projects at the state’s busiest airport, General Mitchell International Airport. The runway safety area improvement project is over $60 million and involves safety area corrections to both primary air carrier runways. Specific bid packages and work items have included runway and taxiway extensions, taxiway realignments, NAVAID relocations, a public roadway tunnel, a service road bridge, and numerous other improvements. The projects have involved significant construction phasing and coordination with numerous other on-going projects and various airfield user groups. The Milwaukee project has been phased to minimize disruptions to the airport’s users and the flying public, and brings the runway safety areas into compliance with FAA design standards prior to the mandated deadline in 2015. 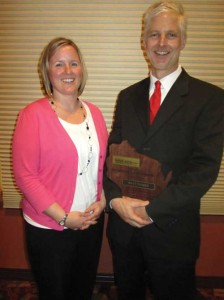 Matt Dubbe of Mead & Hunt received the “Distinguished Service Award” as the Construction Administration Project Manager for Chippewa Valley Regional Airport’s (EAU) recent multi-phase terminal construction project in Eau Claire, Wis. Throughout the project, Dubbe kept in the front of his mind a true sense of what was important to the airport and worked to make that architecturally pleasing. An airport the size of EAU only completes a terminal project once every 30 years, so they needed it to be timeless and Matt Dubbe and his team made that happen.

Michael Goc, vice-president of the Wisconsin Aviation Hall of Fame, was named “Aviation Person of the Year” for organizing aviation history presentations in Wisconsin cities that celebrated their centennial of flight in 2011. Goc invited aviation businesses and organizations, historical societies, museums, and EAA chapters to participate in the events. Goc also traveled to five Wisconsin cities to present the aviation history of each location he visited. 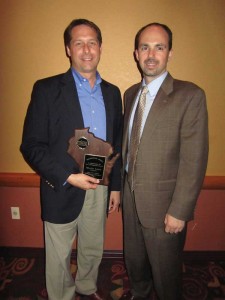 According to Marty Lenss, Director at Outagamie County Regional Airport in Appleton, Michael King demonstrated time and time again very fair and balanced reporting on the airport’s overlay and zoning project, which was a very emotional and heated issue in the community. 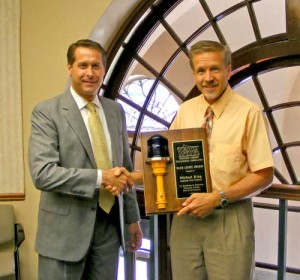 Michael King spent plenty of time sifting through the emotion for the facts before writing his articles,” said Lenss. King also took the time necessary to research federal, state, and local laws regarding overlay and zoning.

“This issue carried into two counties and drew the attention of state legislators, so there was plenty of political and community pressure to lean toward one side or the other,” said Lenss, “but Michael King chose to always keep researching and take the time to talk to all parties involved to print a reasonable article. This was a testament to his integrity.”

Lenss, himself, was recognized at the conference for his service as president of the Wisconsin Airport Management Association (WAMA). The incoming president is Terry Blue, Deputy Director at General Mitchell International Airport.

Among the highlights of the conference included an appearance by Wisconsin Secretary of Transportation Mark Gottlieb, who stressed the importance of linking air transportation to economic development and job creation without regulatory friction. Gottlieb also noted the major investment aviation has made in “safety,” and hopes this can be transferred to other modes of transportation. 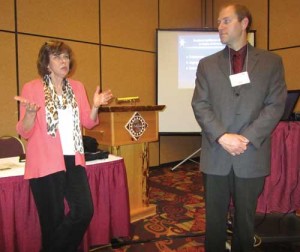 Judy Harding of the WisDOT Bureau of Aeronautics with Jeremy Sickler of Burnett County Airport, Siren, Wis. Together, the bureau and Burnett County completed an "economic impact statement" for the airport.

Also speaking on the importance of airports and economic development was Judy Harding and Scott Brummond of the Wisconsin Bureau of Aeronautics. The bureau will complete an “economic impact statement” for any airport in the state that can be used to promote airports, and obtain local support for airport development projects. Jeremy Sickler, airport manager at Burnett County Airport in Siren, Wisconsin, described how beneficial the study was for his airport and community.

Economic impact studies measure the importance of an airport as a business in terms of the employment it supports and the goods and services it consumes. The results of the study, which was completed in 2008, indicates that Burnett County Airport provided over $1.2 million in sales, supported 36 jobs, and contributed $793,125 in wage income to the local and state economy.

For additional information on obtaining an economic impact study for your airport, contact Judy Harding, airport planner with the Wisconsin Bureau of Aeronautics, at 608-267-1223, or email judy.harding@dot.wi.gov. 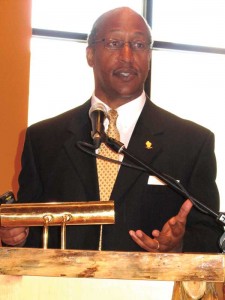 In his presentation, Wisconsin Bureau of Aeronautics Director David Greene stressed the importance of all organizations and agencies to maintain strong working relationships to meet transportation goals at all levels of government. Greene also encouraged airport managers and operators to create opportunities for young people to visit airports, and highlighted the work being done by his office and General Mitchell International Airport on the Aviation Careers & Education (ACE) program.

Bryan Burns and Russ Lawton of the Air Charter Safety Foundation (ACSF), headquartered in Alexandria, Va., were featured speakers and described the importance of ACSF’s Industry Audit Standard (IAS) for air charter operators. The ACSF standard has become the exclusive standard for outstanding air charter operators, and eliminates the need for an operator to undergo multiple annual audits. The program evaluates operators every 24 months for an operator’s Safety Management System (SMS), regulatory compliance, and best practices, minimizing the administrative burden on operators and program managers. For additional information visit www.acsf.aero or call 888-SAFE-135.