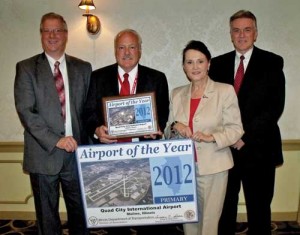 Many recent accomplishments led to QCIA being selected, including the reconstruction of Runway 9/27 and Taxiway P, which was a complex, multi-year endeavor that required an incredible level of communication and coordination, says Dr. Shea.

“We would not have received this award if it was not for the hard work of all MAA employees, the airport authority board members, and all of the tenants,” said Carter. In accepting the award, Carter acknowledged the partnership the airport has with the Illinois Division of Aeronautics and the FAA. QCIA was presented this same award in 1999 and 2004.

Carter was also just named chairperson of the American Association of Airport Executives (AAAE) for 2012-2013. This announcement was made at the 84th Annual AAAE Conference in Phoenix, May 2, 2012.

Bruce Carter started his aviation career in 1975 as a fixed base operation fueler and later became a charter pilot in Mankato, Minnesota. In 1978, he was hired as an air traffic controller until the PATCO strike in 1981. Carter owned a fixed base operation in Clarion, Iowa, before becoming involved in the airport management field in 1984 when he became the operations manager at the Waterloo, Iowa airport. In 1986, he became the airport director at Waterloo Airport. He was director of aviation in Springfield, Illinois, for three years, and director of airports in Peoria, Illinois, for five years. Since 1999, Carter has served as the director of aviation at Quad City International Airport. Carter holds a Commercial Pilot Certificate with instrument and multi-engine ratings, and is a Certified Flight Instructor with 2800 hours.