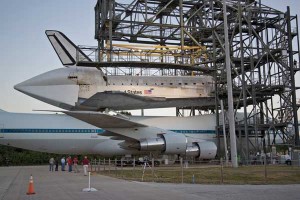 The vehicle assembly building at Kennedy Space Center with “Discovery” getting mounted on top of the Boeing 747 “Pluto 95” for its final flight to Washington Dulles International.

Bittersweet appeared to be the word of the day, April 17, 2012, as the orbiter “Discovery” made its final flight from the Kennedy Space Center on Merritt Island, Florida to the National Air and Space Museum’s Steven F. Udvar-Hazy Center in Chantilly, Virginia, just outside of Washington, D.C., atop a NASA Boeing 747 airliner. Thousands had gathered at the midway point, of what used to be the shuttle landing facility, to witness the historic departure. On hand were many current and former astronauts including the seven members of the STS-133 crew who had landed Discovery on this very runway just over a year ago, ending the orbiter’s 27-year career. 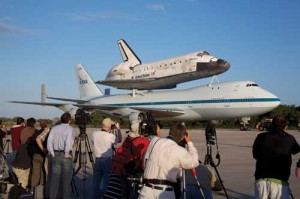 The media gathered around as “Discovery” and its Boeing 747 companion “Pluto 95” prepared for takeoff at the Kennedy Space Center on Merritt Island, Florida, for their flight to Washington Dulles International Airport, where Discovery was placed on permanent display at the National Air and Space Museum’s Steven F. Udvar-Hazy Center in Chantilly, Virginia.

NASA allowed a few lucky visitors to the Kennedy Space Center (KSC) to join the media and NASA employees to witness the flight that would bring Discovery on its last farewell tour of the space coast region. The specially modified 747, call sign “Pluto 95,” departed exactly at 7 a.m., flying south down the coast before turning over Patrick AFB and returning up the coast towards the visitors’ center at KSC, then making a pass over the vehicle assembly building and launch pads, before returning for the final low pass down the runway.

Discovery was the longest running shuttle, first launching in 1984, and one of the original three that were produced including the “Challenger” and “Columbia.” Discovery accumulated exactly one year in space during its 39 missions, spent 365 days in space, orbited the Earth 5,830 times, and traveled 148,221,675 miles.

Some of the more notable flights of Discovery were STS-26 and STS-114, which were both return-to-flight missions after the Challenger and Columbia accidents. STS-95 brought former astronaut and U.S. Senator, John Glenn, back to space while STS-31 launched the Hubble Telescope, bringing us amazing images of the heavens. 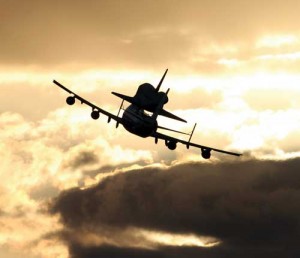 Thanks for the memories.

Over the next few months the remaining orbiters will be moved one by one to their final destinations.

“Enterprise,” which currently calls the Smithsonian home, will be flown to New York’s Kennedy Airport before being shipped by barge to the Intrepid Museum later this summer. “Atlantis” will have a short move to the visitors’ center at the Kennedy Space Center in Florida replacing the current mock up shuttle “Explorer” that will also be moved by barge to Johnson Space Center in Houston, Texas. Finally, “Endeavour” will make its final flight late summer or early fall to the California Science Center in Los Angeles, completing the 30-year shuttle program.

NASA’s mission will now move into deep space exploration, taking astronauts farther than they have ever been before using a new rocket called “Orion,” resembling the Atlas V rocket that flew the Apollo missions. Private companies like Space X will then be handed over the responsibility of low-earth orbit operations. Space X, founded by Elon Musk, the founder of PayPal, is expected to resume U.S. operations to the International Space Station between 2014-2015 and at press time, had scheduled a test docking of its Dragon capsule with the station on April 30, 2012. Until then, the United States, for the first time, will rely solely on the Russians to provide transportation to and from the space station at a cost of $63 million per astronaut.

In the end it seems that “bittersweet” might be the perfect word to describe this day. This was surely a day that saw some sadness and frustration on the departure end as they said goodbye to a friend and remembered the thousands of workers now unemployed by the ending of the shuttle program, while up in Washington, there was overwhelming joy for the out-of-this-world exhibit they were about to receive. History will determine if our federal government’s ending of the shuttle program was a good idea or a little premature, but until then, NASA will continue moving forward. Let’s just hope that the orbiter Discovery will inspire those future engineers who will once again make us look skyward and yell, “Go, baby Go!”