A Day of Discovery 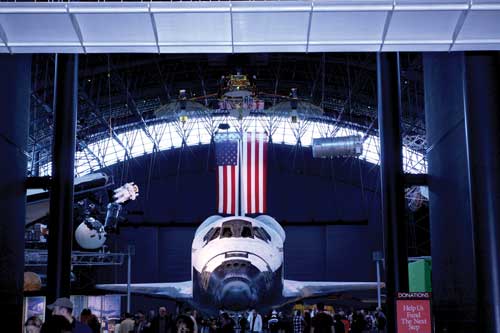 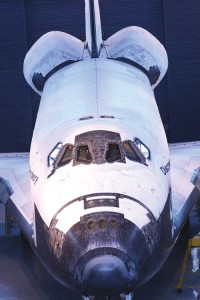 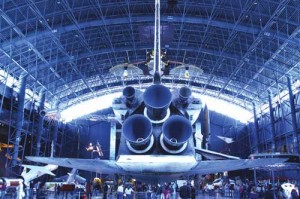 The tail section of Discovery.

On April 17, 2012, the decommissioned space shuttle “Discovery” arrived at the National Air and Space Museum’s Steven F. Udvar-Hazy Center at Washington Dulles International Airport. A little over a week later, a group of pilots and aviation enthusiasts from the Minneapolis area flew via Sun Country Airlines charter to see Discovery in its new home, as well as the other aircraft and exhibits at the Udvar-Hazy Center.

The trip to the museum was the latest in a series of “aviation day-trips” coordinated by former military/airline/corporate pilot, Malcom “Spook” Johns, and hosted by Sun Country Airlines. Previous trips coordinated by Spook included visits to the Naval Air Museum at Naval Air Station Pensacola, and the Air Force Museum in Dayton, Ohio.

For the Udvar-Hazy trip, the cost included round-trip airfare and bus transportation from the terminal at Dulles to the museum, and a free museum pass. As an added bonus, the Sun Country first officer for the flights to and from Dulles was former astronaut and space shuttle commander, Curt Brown. 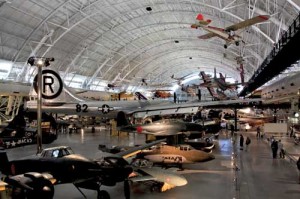 The B29 “Enola Gay” displayed in the massive Steven F. Udvar-Hazy Center in Chantilly, Virginia.

Sun Country Flight 8855 departed MSP Terminal 2 on time at 6:30 a.m. CDT. Although early in the morning, the cabin of the B737-800 aircraft was filled with anticipation. The passengers laughed and talked about airplanes and other aviation-related topics, as is often the case when pilots and aviation enthusiasts get together. The flight arrived at Dulles shortly before 10:00 a.m. EDT, when the Udvar-Hazy Center opened. Once the aircraft was parked on a midfield ramp, one of Dulles’ “mobile lounges”(also known as “plane mates” or “people movers”) arrived to transfer us from the aircraft to the main terminal building.

The Udvar-Hazy Center is adjacent to Dulles International. A taxiway actually connects the two and would have only required a very short walk from the aircraft to the museum. However, the taxiway is usually used just for official movement of aircraft or equipment to and from the museum, so we boarded a bus at the main terminal, which then took us to the Udvar-Hazy Center. 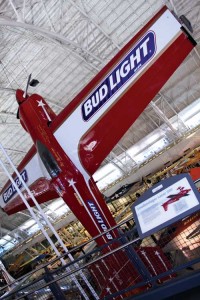 The Udvar-Hazy Center hosts an amazing collection of aircraft and aviation exhibits. In addition to Discovery, the museum’s exhibits include the Concorde; a Lockheed SR-71A Blackbird; the only on-duty survivor of the attack on Pearl Harbor, a World War II U.S. Navy Sikorsky JRS-1 amphibian aircraft; Bob Hoover’s Shrike Commander; the B-29 bomber “Enola Gay;” 1980 World Aerobatic Champion and air show performer extraordinaire, Leo Loudenslager’s, Bud Light Laser 200; and dozens of other aircraft and aviation memorabilia.

As you enter the museum and walk to the balcony overlooking the main gallery, you are greeted by a Curtiss P-40E Kittyhawk and a Vought F4U-1D Corsair suspended from the ceiling. Immediately below the balcony the SR-71A ominously greets visitors to the Boeing Aviation Hangar. (Some of you may recall that the museum and its SR-71A were featured in the movie “Transformers: Revenge of the Fallen.”)

Behind the SR-71A, the space shuttle Discovery takes center stage in the James S. McDonnell Space Hangar. Discovery is surrounded by a variety of spacecraft, satellites, recovery capsules, rockets, engines and other space-related exhibits and artifacts.

Up close, Discovery provides an intimate perspective that is far more detailed than you would otherwise see in print or other media. You can actually see the individual ceramic heat tiles that were the focus of the investigation after the space shuttle “Columbia” disaster. Exhaust marks are visible adjacent to the control thrusters. And the texture of the white nomex reusable surface insulation, which is a flexible fabric that looks like a wool blanket covered in sealant, is visible. These are all aspects of Discovery, and other space shuttles, that you very seldom see, if ever, in standard media coverage of the shuttle program.

The shuttle’s condition is almost identical to when it was in service. According to Commander Brown, Discovery’s cockpit is intact, but much of the internal wiring and electronics were removed when Discovery arrived at the museum. Unfortunately, the cockpit is not open for public viewing.

After lunch, we were treated to a private presentation/question and answer session in the museum’s education center with Commander Brown. After viewing a brief video, Commander Brown answered passengers’ questions for 2 ½ hours. He talked about the U.S. and foreign space programs, the unique challenges of working in space and his opinions regarding the future of space travel and exploration. Commander Brown definitely provided an inside, and often humorous, scoop on what I think is probably the best job in the world.

Shortly before the museum’s closing time, the bus arrived for our return trip to Dulles. In reverse of the morning logistics, when we arrived at the main terminal we were taken by people movers back to the aircraft, after clearing security, of course. Sun Country Flight 8856 departed Dulles around 7:45 p.m. EDT for the non-stop flight back to MSP.

As Commander Brown flew the B737 toward the setting sun and home, the cabin of the aircraft was subdued compared to the laughter and conversation of the earlier leg. Some passengers slept. After all, trying to see all of the aircraft and exhibits in the museum in one day takes a lot of walking! Other passengers discussed the museum and its exhibits, or simply looked out the window at the cloud deck below, lost in thought. And at Commander Brown’s joking suggestion, some passengers performed “fluid-loading” in preparation for landing at MSP.

We arrived back at MSP Terminal 2 shortly after 9:00 p.m. CDT after a full day. Although I think it is possible to see all of the museum’s exhibits in one day, I have to confess that I fell short. That’s okay. It gives me an excuse, not that I need one, to go back to the museum again.

If you ever plan a trip to the Udvar-Hazy Center, I recommend scheduling two full days to allow more time to read about and enjoy the aircraft and exhibits. And if you like to take pictures of aircraft, a second day would allow you to make two full “laps” around the museum: one with your wide-angle lens, and the second using your telephoto lens.

As far as I know, Spook doesn’t have any other “aviation day-trips” in the works, but based upon the success of this and his prior trips, other trips may be planned in the future, so stay tuned to Midwest Flyer Magazine for special announcements, and check with Sun Country Airlines for tour dates. I highly recommend participating.