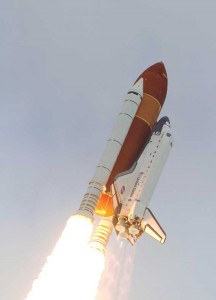 Blazing A Brilliant Trail: Space shuttle “Endeavour” and its six-member STS-134 crew head toward Earth orbit and rendezvous with the International Space Station. Liftoff was at 8:56 a.m. (EDT) on May 16, 2011, from Launch Pad 39A at NASA’s Kennedy Space Center. NASA Photo

The National Air & Space Administration (NASA) called the second week in May 2012 and invited me to visit the inside of their orbiter “Endeavour,” while it was undergoing one of its final power-up procedures. This was a rare opportunity as NASA’s media department only receives hours of notice as to when the orbiter will be made available to media and limits those opportunities to a handful of media representatives. I replied a quick yes, and found myself a mere 12 hours later, standing outside of orbiter processing facility bay number 2 (OPF-2) at NASA’s Kennedy Space Center on Merritt Island, Florida. 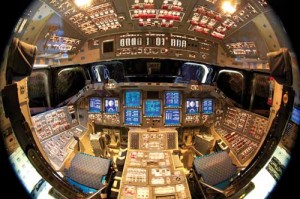 During preparation for displaying at the museum, NASA had to power-up the orbiter every so often to de-service fluids from the system lines. These limited power-up sessions allow visitors to view the flight deck as it would have looked on launch day.

Just a few feet inside sat Endeavour being readied for its final ferry flight to the California Science Center in Los Angeles in September. Endeavour, or OV-105 as it is referred to at NASA, was the fifth and final orbiter added to NASA’s fleet, arriving in 1991. At the end of its career Endeavour had accumulated 299 days in space, flying 25 total missions while orbiting the Earth 4,671 times.

As I walked into the processing facility I noticed that all pictures hanging on the walls have red tags on them. At first they appeared to be price tags, but after closer inspection, I could see that they all had been marked signifying that these were artifacts to be kept once this facility is closed. It then hit me that once Endeavour leaves, this building will no longer be needed, the halls will be empty, and the people gone.

At the end of the hall was my first stop where I could place my sunglasses and keys into a slot in the wall. Although Endeavour will never fly again, NASA keeps the same policies in place as if it were, thus nothing in your pockets and nothing that can come loose inside the orbiter is allowed. As I proceeded into the next room, I was greeted by a security check and just behind him, captured my first glimpse of the shuttle, hidden within a jungle of scaffolding that surrounds it. In front, one large sign is lighted reading, “Vehicle Powered.” Endeavour was the last of the shuttles to have power attached to it.

The last de-service procedure was completed on May 11, 2012, and at 9:58 am, the last switch was thrown powering down the orbiter forever. 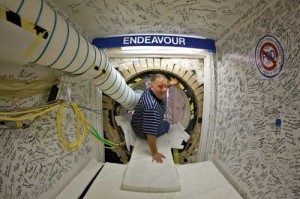 Climbing through the fuselage of Endeavour.

Heading up the stairs we were met by yet another checkpoint just before we entered the white room. Here we remove our badges so that NASA officials can keep track of everyone that is inside of the orbiter and are once again checked that everything has been removed from our pockets. Blue tape is provided to cover over watches and jewelry to prevent pieces from accidentally falling off inside the orbiter.

It was then time to enter the white room, which acts as a sterile room between the outside elements and the orbiter itself. I first entered the room through a set of doors that enclosed me in an elevator-sized room where blowers were engaged removing any debris off of my clothing. Once inside I could not help but notice that the room was covered in thousands of signatures from floor to ceiling. It turned out that everyone visiting the interior of the shuttle from astronauts, technicians and guests are given the opportunity to “autograph” a wall of the room. A United Space Alliance technician quickly points out an STS-107 mission patch sticker; around it signatures could be found from the crew, which had used this white room during one of its dress rehearsals for launch. STS-107, flying on the orbiter “Columbia,” became a worldwide news story when it came apart during re-entry over northern Texas. The entire crew was lost on that mission, but it was clear to the employees working on the shuttle program, that they would never be forgotten.

We entered the orbiter through the main entry hatch, our booties snug around our feet to protect from foreign objects entering the orbiter. The main hatch leads into the mid-deck area where the seats have already been removed for future display in the museum.

Here is where the astronauts could exercise, sleep, conduct their experiments and hit the head when needed. It could be modified with up to three seats, depending on the size of the crew that was going up. There is a hatch in the aft part of the mid-deck leading to the payload bay where astronauts would exit to conduct spacewalks.

There are two ladders on either side of the room that lead up to the flight deck area of the orbiter. Climbing up these ladders makes you realize what a small area these astronauts had to work in. It is hard to imagine how they were able to get into their seats with their space suits on while it was standing vertical, as I had a hard enough time in blue jeans while it sat horizontal on the ground.

The flight deck is outstanding to look at all lit up. As an airline pilot, I was still amazed at what I was seeing…more like a work of art than a functioning cockpit. United Space Alliance technician William Powers assisted me with navigating my camera equipment around the tight quarters while also explaining to me what I was looking at. He moved around the flight deck fixing the seat cushions, removing pieces of tape that were covering buttons, fixing the brightness of the lights just right as if he was a proud parent showing off his child. “It has to be just right,” he said. He had been with the shuttle program since its beginning. What will you do after the Endeavour leaves, I asked. “Looks like I am out of the space business,” was his response. “No one is hiring.” A remark that is all too common from the thousands of now unemployed shuttle workers around the country. The remaining workers continue to maintain their professional attitudes and work ethics, but you cannot help but notice the underlying frustration that many of them are experiencing. They are proud of what they have done and are happy to see that the orbiters will be preserved. But with so many good years of life left on these orbiters, many are asking, why now? 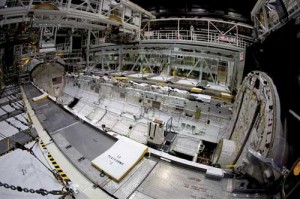 The cargo bay area of Endeavour is where numerous spacewalks, one “Mir” docking, and 12 space station dockings had occurred. This is where “Spacelab” first gave astronauts room enough to conduct multiple experiments. This is where the “Canadarm2” robotic arm and Japan’s “Kibo” module sat in during the construction of the Space Station.

My limited time on the Endeavour was coming to an end. Just not enough time to soak it all in, but definitely an experience I will take with me for the rest of my life. Before we leave my escort Kendall Thornsley, a long-time NASA photographer and media representative, wanted to show me one more thing. We walked around the nose of Endeavour, up the spider web of scaffolding, and back to the cargo bay area.

The doors were open and you could see the clean inside of the cargo bay.  Before the final power down, these doors will be closed and sealed permanently. “Atlantis,” which will be displayed at the Kennedy Space Center, is the only orbiter planning to be displayed with the cargo bay doors open.

My morning with Endeavour has now come to an end. My time is up and the next media representative is already putting his boots on for his own experience. But there is still one last thing I have to do before I leave. Now where is that marker…I have a wall to sign!

Special thanks to Lisa Fowler and Kendall Thornsley of NASA; and William Powers and Rene Arriens, representing USA.