The centerpiece of Wipaire’s display at Sun ‘n Fun this year, March 27 thru April 1, 2012, in Lakeland, Florida, was a custom-designed and built Cessna 206 that the company delivered to Key West Seaplanes, a charter operation in Key West, Fla. The gorgeous yellow and white aircraft attracted a lot of attention to the Wipaire display, and Wipaire President Chuck Wiplinger was on hand to answer questions and to discuss with pilots other projects the company has underway.

While Wipaire is most associated with its aircraft floats, the company also has been engineering and building high-performance modifications since 1960. The Cessna 206 delivered to Key West Seaplanes was built from parts and a complete fuselage in about three months, and has amphibious floats that will allow the plane to operate on water or land, including grass airstrips.

One of the main features are the “Wip Tips” that extend the wings by 18 inches, increasing the rate of climb and reducing the take off and landing distances. The modified tips also reduce fuel consumption and increase flying stability at low speeds. 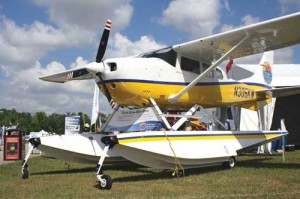 Powered by the Wipaire IO-550 engine upgrade with the McCauley prop modification, this Cessna 206 is able to use all 300-plus horsepower continuously, boosting climb and cruise performance. Surprisingly, it has a quieter operation, which helps Key West Seaplanes fulfill its commitment to noise abatement, as it flies to Little Palm Island and other exclusive island resorts.

The aircraft also features the Wipaire copilot door installation, which adds a third door made of carbon-reinforced composite material that utilizes Cessna-manufactured hinges and latches.

The additional door provides both safety and convenience getting in and out of the plane. In the next few months, Wipaire plans to update the Cessna with its newest generation of floats and expects to be doing modifications to other aircraft in the Key West Seaplanes fleet.

Wipaire is also involved in research and development to expand the utility of the Cessna 208 Caravan, Cessna 182 Skylane, and the Aviat Husky.

The South St. Paul, Minnesota-based company is testing new Wipline 8750 floats for the Cessna Caravan and at press time, was expecting an STC in June. The 8750s will replace the Wipline 8000 floats.

Depending on an aircraft’s configuration, the new floats will increase the gross weight to 8750 pounds. The modified hull design has a steeper dead-rise angle that should provide better handling in rough water. Wiplinger said the biggest changes are a new main gear system designed to reduce maintenance and improve accessibility by having actuating components in fewer bays, as well as a more reliable oleo*. The new floats feature a pylon attachment instead of struts, which along with the new hull shape, makes them similar in design to the Wipline 13000 floats for the Twin Otter.

* An oleo strut is an air-oil hydraulic shock absorber used on the landing gear of most large aircraft and many smaller ones. It cushions the impact on landing and while taxiing, and damps out vertical oscillations.