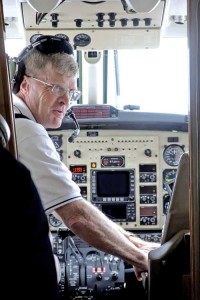 Barry Erickson, a veteran of the Minnesota Department of Transportation with more than 25 years of state service, was recently promoted to Chief Pilot for the Office of Aeronautics. He has been an active pilot since 1972 aand brings a vast wealth of flying and aviation experience to the position.

In the fall of 1972, Erickson joined the U.S. Air Force and completed officer and undergraduate pilot training. He soloed in the Air Force T-41 Mescalero (essentially a C-172), and quickly moved into the T-37 Dragonfly for jet training, then into advanced jet training flying the supersonic T-38 Talon. For the next six years on active duty, Erickson flew the F-4 Phantom II. Following his active duty time, Erickson began flying for Braniff Airlines as a Boeing 727 flight engineer. He was furloughed in 1980 when Braniff went out of business.

During 1978, Erickson began flying with the Minnesota Air National Guard in Duluth, Minnesota where he once again flew the F4, RF-4C and the F-4D Phantom. When the Phantoms were retired in 1991, Erickson transitioned to the F-16 Falcon, and later to the C-26 Metroliner.

Just a year prior to joining MnDOT as an Aviation Representative, Erickson flew charter for Duluth Aviation in Duluth, Minnesota. Then in 1984, he began flying the Beech Bonanza, Beech Baron, Hawker-Beechcraft King Air, and the Cessna Citation for MnDOT Aeronautics.