When you invest $2 million in a business during an economic downturn, you have to know your market, know your business, and believe in yourself and your staff, and Nancy Grazzini-Olson does. She has been operating Thunderbird Aviation at Flying Cloud Airport (KFCM) in the Twin Cities’ southwest suburb of Eden Prairie, Minnesota, and Crystal Airport (KMIC) in the northwest suburbs, since her late father, Albert, sold the business to her in 2000. Both operations combined, the company employs about 100 people.

The new 8,000-sq. ft. facility is as impressive from the street, as it is from the taxiway. The new structure says, “Come Fly With Me” at a time general aviation is working hard to recruit new pilots and retain existing ones. Thunderbird Aviation is located on the north side of the field at 14091 Pioneer Trail with easy access from all runways. 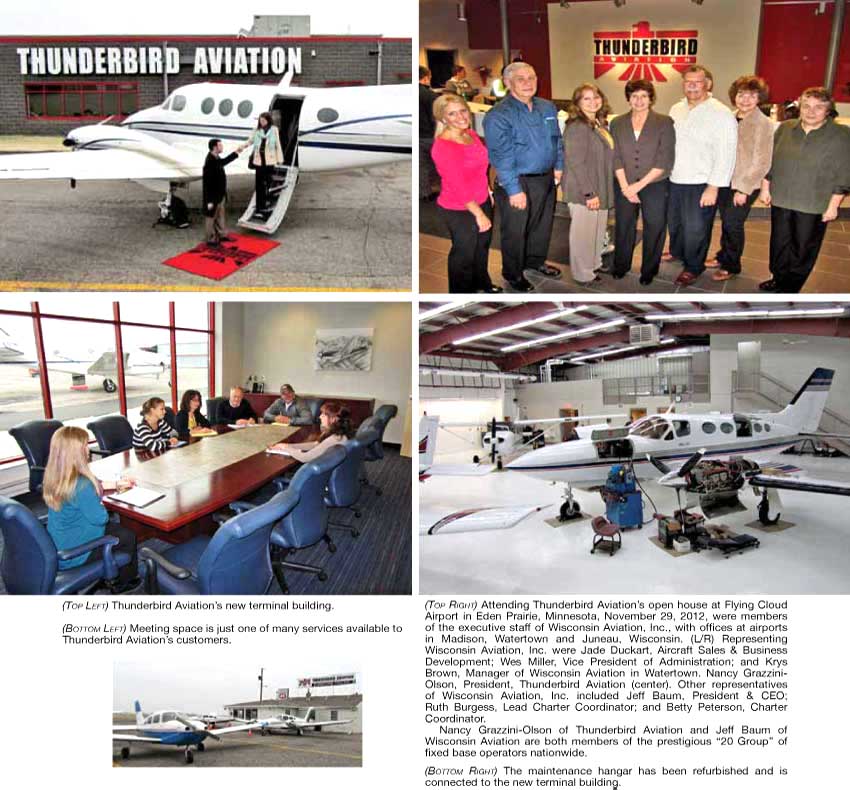 “Our new facilities have enabled us to expand our services, not merely redirect them,” said Olson. “We will remain true to our grassroots clientele of aircraft owners, charter customers, and those who rent aircraft from us, and continue to be the leader in flight training in the Twin Cities. (Thunderbird Aviation is the largest flight school in Minnesota.) But we are now in a position to also serve ‘corporate aviation’ in a way we never could before.”

Thunderbird has always sold more 100LL than any other operator at Flying Cloud, says Olson. Their goal now is to become the number one distributor of Jet A.

Thunderbird Aviation is a distributor of Phillips 66, and its line personnel have received training from both Phillips and the National Air Transportation Association (NATA “Safety 1st).

There are no ramp or tie-down fees at Thunderbird Aviation, and both cold and heated hangar storage is available. Thunderbird also provides pre-owned aircraft sales and brokerage services.

When the economy started to turn south in 2005 and aircraft rental declined, Olson diversified Thunderbird’s services, increasing charter and getting contracts from the Minnesota Department of Natural Resources, keeping Thunderbird’s fleet active.

“When most operators were down, our business was growing,” said Olson.

Thunderbird Aviation’s original building may have been right for aviation 50 years ago with its “club-style” 2000-sq. ft., wood-framed structure, but hardly for today’s market. In 2012, Thunderbird Aviation celebrated its 50th anniversary. The new facility, which opened on October 3, 2012, is symbolic of the company’s success, and its brick structure symbolic of the company’s strength.

Thunderbird’s maintenance shop got a facelift in the process, too. The new terminal is connected to the maintenance hangar, and to comply with new codes, the plumbing and heating systems were upgraded.

Olson credits the Metropolitan Airports Commission (MAC) and its executive director, Jeff Hamiel, and Gary Schmidt, who is in charge of MAC’s reliever airports, for working with her in building the new terminal building.

“The expansion would never have been possible if we were not given a 25-year extension to our lease, which we have had since 1962,” said Olson.

Thunderbird Aviation has worked hard to make Flying Cloud Airport the airport when visiting the Twin Cities and the bustling I-494 business district.

The entire Flying Cloud Airport has undergone some major improvements in recent years, including a new 5,000-ft. runway in 2009, and new sewer and water.

Chris Cape is Thunderbird’s general manager and director of operations. It is Cape’s job to make sure everything runs smoothly and that Thunderbird competes with the other operators at both locations, Flying Cloud and Crystal, and throughout the Twin Cities metro. There are six (6) reliever airports in the Twin Cities (www.MetroAirports.org/relievers), plus Minneapolis/St. Paul International Airport.