Across America In A Seaplane | Midwest Flyer – General Aviation Magazine

Across America In A Seaplane 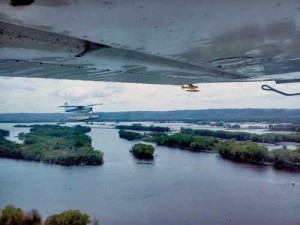 Every fall and spring, Brian Schanche of Adventure Seaplanes migrates from Surfside Seaplane Base (8Y4) on Rice Lake near Lino Lakes, Minnesota, to Lake Pierce, near Lake Wales, Florida. It all begins months ahead of time. Phone calls and emails start arriving from those who want to get their seaplane rating, and experience the enjoyment of a three-day seaplane cross-country trip, not to mention a couple of days in Florida!

Our trip began in late October when I arrived at Surfside with my student, Jeff Moryn of St. Croix Falls, Wisconsin. Brian greets us, along with his student, Jack Pollock of Milwaukee. After loading our gear and extra fuel bladders into the Cessna 180 and Cessna 172, the preflights were conducted, the trip plans were finalized, and we plugged the coordinates for George’s Seaplane Base into our iPad’s ForeFlight program and the GPS units. After the run-ups were completed, Jeff and Jack got their first lesson on launch procedures. Even with a slight breeze, the seaplanes act like giant weather vanes, so we were careful not to bump the floats against the dock or the wings or struts against our heads. The operation was an orchestrated team effort.

With the launch sequence complete, we taxied to the north end of Rice Lake and took off into the wind with a shallow turn to the southeast. Brian and Jack, who were flying the Cessna 180, soon caught up to us and did a photo-op fly-by as we headed towards the St. Croix River – Mississippi River confluence. We decided to fly low, knowing that seaplane pilots tend to get nose bleeds if they fly more than a couple thousand feet AGL. Hence, we had the pleasure to follow the river between the beautiful fall-colored river bluffs!

As we approached La Crosse, Wisconsin (KLSE), we contacted the tower to request permission for a flight of two to transition their airspace over the river. We continued our flight down the river away from the surrounding bluffs.

Two and one-half hours later, we spotted the C180 docked at George’s Seaplane Base on the Mississippi River in Le Claire, Iowa, home of the American Pickers TV show. We circled around the planned landing area and Jeff learned the art of reading the nearby smoke stacks and river waves for wind direction, and water for dangerous obstructions, which litter most rivers. The landing area looked good, so we splashed down just off a point northwards towards a small island.

As we taxied back, George was waiting for us with his hip boots on. He guided us to the wooden ramp, which George had next to the dock – Jeff’s first lesson on ramping. “Be careful when you step out; it’s slippery,” George warns. “Ohhh, yaaaaaa!” I said, as I did a kabuki dance on the wooden planks and tried to maintain my dignity.

After the planes were tied down for the evening, we headed up to George’s house where his wife and daughter greeted us with hors d’oeuvres and drinks, and off we went to dinner before heading to the hotel.

The next morning on the way to George’s house, we took a brief tour of the American Pickers warehouse – an interesting place. The planes were refueled, repacked, and because of the cold night, we awaited the sun to melt the frost off the seaplanes. After the hugs and handshakes, we taxied out to the middle of the channel, on the lookout for the tugboats and fishing boats cruising up and down the river. After liftoff, we did a fly-by and rocked our wings to acknowledge our thanks to George and his family.

Brian and Jack got about 2 miles in front of us and we happened to be right behind them at the same altitude. All of a sudden, the vortices from the wingtips, prop, and floats of the Cessna 180 rolled us violently counterclockwise and then violently clockwise. Warning: Keep your distance!

Our next rest and refueling stop was the Green Turtle Marina in Grand Rivers, Kentucky – about 50 miles East of Paducah between Kentucky Lake and Lake Barkley in the rolling hills of Kentucky. Jeff got a trial-by-fire docking lesson in a confined area with swirling winds, trees along the shore’s steep bank, and tall steel posts on the docks that stuck up higher than the wings. There are several ways to accomplish this and Jeff tried a couple of them before getting it right without dinging up a wing or other parts in the process.

Since the entire trip is flown under VFR conditions, weather can be threatening and Grand Rivers is a great place to spend the night.

There’s a very popular restaurant in Grand Rivers – Patti’s 1880s Settlement – where the waitresses are dressed in 1880s style. A favorite is the “Pork Loin Bacon-Wrapped Filet, charbroiled and topped with glazed baked apples.”

We checked the weather and it was good enough to launch, so we had to bypass Patti’s on this trip and headed on to Guntersville in northern Alabama.

Flying over Tennenessee, Alabama, and Georgia, we were in awe with the beauty of the rolling hills, state parks, and wildlife management areas.  As we approach Huntsville, Alabama, the ceilings came down to the point where we could not get over the hills, so we turned away from them and headed for the Tennessee River valley where we flew for the next 20 miles.

Jeff received several lessons in “How to avoid power lines 101,” which cross high above the river from bluff to bluff. Soon we saw Guntersville (8A1), which is nestled in the hills and surrounded by Lake Guntersville where there is a small dock off the north end of the asphalt runway.

We got a ride to the terminal building where we picked up a courtesy car and drove to the hotel a few miles down the road. The hotel overlooks the Tennessee River where there always seems to be a Bass fishing tournament when we are there.

That evening over dinner, we met a pilot who was ferrying a plane down the East Coast to Florida. We asked him what he was doing so far west of course. “Hurricane Sandy” was his reason. That being said, we ended up on the edge of the hurricane. Fortunately, we were on the backside of it with a nice tailwind all the way from Iowa to Florida.

The next morning after eggs, Southern fried potatoes, and grits for breakfast, we piled five guys and our gear into the courtesy car and headed for the airport, then repacked and refueled the planes for the last leg to Florida.

Not long after departing Guntersville, we flew a couple of miles west of the Talladega Superspeedway in order to stay out of the restricted airspace. We snapped some pictures of the speedway, and later, of Auburn University’s campus and football stadium.

Later in the flight, we arrived at Bagby State Park on the Alabama-Georgia border near Eufala, Alabama (KEUF). Our original plan to park in a confined bay was thwarted with high winds and low water levels that exposed logs. There is an island with sandy beaches that worked out much better. It was a good place for Jeff and Jack to practice beaching. Parked in the shallow water, we got a chance to soak our feet and had a snack while Brian refueled the Cessna 180 directly from the fuel bladders. Most importantly, we were mindful of the signs that say “Alligators – Stay Clear – Do Not Feed.”

Upon departure from shore, the strong winds provided an opportunity to learn, then practice, sailing before taking off again to the south. Two hours later, with the temperatures climbing quickly, the sweatshirts, jackets, gloves and caps we wore two days ago had to be shed for t-shirts, shorts and sandals. Try changing clothes some time while in flight in a 172!

The hills and forests changed to orange and mangrove plantations. As we approached Lake Pierce, Florida, we could see Disney World in Orlando, except we couldn’t get too close because of the permanent TFR there. Nonetheless, we were able to do some “splash and goes” on many of the numerous lakes as we made our way to Brian’s winter home.

Upon landing, we were met by a group of friends on the dock near the trailer aptly called “Bent Prop Pilot Shak.” This is where we stayed.

With the bags unpacked and some cool drinks to wash down the “trail dust,” we walked over to the Cherry Pocket Steak and Seafood Shak for dinner. The restaurant has live music on the outside deck and a bar with a sign “Do Not Feed The Dam Gators.” They were swimming nearby.

The next day I spent the morning finishing Jeff and Jack’s seaplane instruction while Brian opened up his quarters. At 1:00 pm, the designated pilot examiner, who is the grandson of the famous Jack Brown (seaplane base), shows up and by 5:00 pm, Jeff and Jack are rated seaplane pilots.

For the students, the cross-country trip turned the seaplane rating experience into a lifetime adventure. Brian and his Adventure Seaplanes have made the trip an enjoyable training experience and fun with the help of great friends along the way.

The next day, we flew back to Minneapolis commercially, and Brian stayed behind to provide seaplane instruction and airboat rides on Lake Pierce the rest of the winter. Come late April, the seaplanes will head back to Minnesota with other student pilots who want to experience cross-country seaplane flying.