The Day I Lost My Engine! 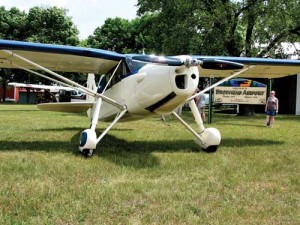 EDITOR’S NOTE: In the February/March 2013 issue of Midwest Flyer Magazine, contributing editor Dan Wegmueller described how he went about restoring his 1939 Fairchild 24R, and how restoring an antique aircraft is within every aviator’s reach. In this issue, Wegmueller describes how he reacted when the 200 hp Ranger engine that powers the Fairchild threw a piston shortly after takeoff, requiring him to make some very quick decisions.

You just lost your engine. What are you going to do? With that, the instructor reaches down and pulls the throttle to an idle, simulating an engine failure.

For such a simulation, we are typically a couple thousand feet above the ground. There is plenty of time, and always plenty of altitude. There is no stress. I set up a glide and leisurely scan the earth for a suitable landing spot. There is always something – a private airstrip, an alfalfa field, wheat, soybeans – or worst-case scenario – a cornfield. If all else fails, I am sure to locate a stretch of highway.

I glide toward my emergency destination until the instructor remarks, “That’s good enough – you would have made it.” We fly away…piece of cake.

I found the experience of a real-world engine failure to be far more, well, intimidating than the simulation.

The wheels of my 1939 Fairchild 24R left the earth as I climbed skyward. At treetop level, I noticed something perplexing: the airplane seemed to be losing power. I watched as the RPMs on the 200 hp Ranger dropped from 2400 to 2300, to 2200. She was struggling, clawing her way into the air. I felt irritated. Probably the carburetor needed adjustment. I groaned at the inconvenience of having to remove the cowling.

At 300 feet above ground level (AGL), the situation worsened. Engine RPMs dropped to an unsettling 1700. I methodically checked the systems – fuel valves, carburetor, and magnetos – but could find nothing wrong. I banked the airplane back toward the airport. We were flying low and slow; it required great effort to maneuver the stricken bird.

I did not know it, but four feet in front of me, deep within the churning bowels of the engine, a “wrist pin” was about to fail. It had slipped past the compression caps meant to hold it in place, spun, and wore to the point of shearing. I was not aware of any of this until the finger-sized pin finally let loose.

Now, barely 400 feet AGL, and flying dangerously close to stalling speed, the engine failed. A tremendous boom shook the aircraft, and foul-smelling black smoke filled the cockpit. For a few moments, I could not see forward, until the ink dissipated. RPMs dropped to a rough idle, the engine sounding as though it was ingesting gravel.

At that moment, I was overcome with a super-awareness of my surroundings. I did not panic. Decisions and thoughts that would normally require seconds to process were identified and analyzed almost instantaneously and with incredible clarity.

What do I do now? There is the airport. I must land at the airport. Do I radio for help? Preposterous – there is not a soul on earth who can help me right now. The engine is still running, albeit barely. I cannot climb, but I must maintain altitude. I looked at the airspeed indicator. The Fairchild will stall below an airspeed of 50 mph. The indicator read 60. Good – I must maintain 60 mph, regardless of my altitude and distance from either the airport or off-field landing area.

All of this information was processed and analyzed within seconds, but as I scanned the instrument panel, every gauge indicated normal operation. I thought, what the hell? Even as the engine let loose with another series of bangs, every gauge on the panel was where it was supposed to be.

As my mind raced, my body acted out of habit, requiring no conscious input. I set up a tight left downwind as I was conditioned to do.

A normal approach to a landing in the Fairchild is typically around 75 mph. I was not 400 feet up, barely scratching along at 60 mph. In order to make the runway, I would have to execute a low-speed, low-altitude 180-degree turn to final. The airstrip now behind me, I applied hard left rudder and left stick, rolling the old girl nearly onto her side. Then, I focused on the single most important input at my disposal: my airspeed.

In such a tight bank, any speed above 60 mph meant we were descending too rapidly. I would run out of altitude before I made the runway. Conversely, any speed below 60 mph meant I was approaching stall speed. Like a hawk I watched that needle. It crept to 62, then 63. I pulled gently back on the stick. The needle stabilized and then fell to 60. Perfect! Even at this extreme attitude, I marveled at the precision of this flying machine – no further inputs were required.

It was also at this moment that I saw something I shall never forget as long as I live. Typically when I fly, I look for my shadow. On a sunny day, it is always there, skimming along, blotting out houses, cars, fields, and roadways – keeping up with my movements and impervious to terrain. Today was no different. Thanks to the midday sun, I could see it, directly beneath the pilot-side window.

The shadow was definitely that of the Fairchild – her arched back, rounded tail, and curved wings. Her landing gear hung deliberately, signature to the design of the airplane. The silhouette was perfect, as though cut from paper.

Only this time, black smoke billowed angrily out from the shadow, forming an evil contrail that ran from the belly, all the way to the upper end of the aircraft. It sounds strange, but it wasn’t until I saw that evil, broiling line of smoke that I realized something was seriously wrong.

In that nanosecond glance, I noticed something else about my shadow: It was growing larger.

I knew I was descending. The big, heavy, slow Fairchild simply could not execute such a turn with the engine at idle and still maintain altitude. My eyes swept over the vertical airspeed indicator. The gauge read negative 400 feet per minute. This meant I was going to impact the earth in less than 30 seconds, ready or not.

The runway was now dead ahead. In one fluid movement, I released left rudder, moved the stick center, and pulled back gently to arrest our descent. The airplane leveled; the engine continued to run at a rough, coughing idle. We had completed the turn and were now on final approach.

Things were moving fast. In my peripheral vision, I caught sight of a power line, treetops, silo and barn roof zipping past beneath the landing gear, followed by a blur of cornrows. Amazing how much faster 60 mph seemed, the closer to the ground I got.

I focused my attention forward. Ahead were a ditch and a barbed-wire fence. Then, my salvation – the runway. All I had to do was coast in for a nice, smooth landing, but wait – my heart skipped a beat – we were low. That 180-degree turn, although necessary, had cost me too much altitude, and easing back on the stick compounded my problems.

The controls were beginning to feel mushy. I could sense the tail starting to drop. As the aircraft began to flare, we lost airspeed geometrically. I glanced at the airspeed indicator, knowing before I looked that it would be low. It read 53 mph. The feel of the controls alone told me that we were about to stall. The Fairchild would flop into the cornfield and slam into the ditch. The runway may as well have been a mile away.

At that moment without thinking, I utilized the only option at my disposal. I reached down, grabbed the throttle, gritted my teeth, and expecting the worst, pushed it full forward!

The engine coughed, sputtered, hesitated, but did precisely what I needed it to do at that nanosecond. The dying engine gave me 200 more RPMs. The burst of power lifted the tail, killing the flair and leveling the airplane. Out of my peripheral and inches beneath the landing gear, I saw end rows, the ditch, and the barbed wire fence shoot past, followed by mowed grass. A split second later, a painted marker indicated that we had made it.

With power to idle, the old girl instantly wallowed. She dipped her tail, having been drug panting and gasping across the finish line. I eased the stick back, feeling for the earth. Then, the tailwheel and two mains touched down simultaneously. I had just executed the softest, most beautiful landing of my flying career. I almost wished that a group of people had been there to witness it and to cheer me on.

In one fell swoop, I turned off the fuel valves, engine, electrical system, and leaned the carburetor. Out front, the propeller windmilled roughly to a halt, even as the airplane bounced softly down the runway, powered by nothing more than momentum.

At the opposite threshold I applied slight right rudder. Using the last of her impetus, she turned off the runway and slowed to a standstill. It reminded me of a Bob Hoover arrival to show center following one of his power-management landings, only my landing was pure luck!

Absolute silence. Until that moment, I was unaware of how noisy my world had been. I sat in the cockpit, not really sure of what to do next.

I felt no emotion, except perfect calm. I was overcome by a sense of peace and tranquility, such that I have never known before or since. I reached up to remove my headset. As I placed it on the passenger seat, I noticed it shook in my hand. This, along with a heart beating like a jackhammer, was the only indication that something traumatic had just transpired.

The directional gyro whirled to a halt. I cracked open the door. A cool summer breeze kissed my ear and rustled the leaves of an oak tree nearby. A bird sang a heavenly tune. I sat in the airplane for quite some time, just to soak in the serenity.

Before I finally did climb out, I checked the flight timer. From the moment the engine first let loose, to the time I shut it off upon landing, less than two minutes. 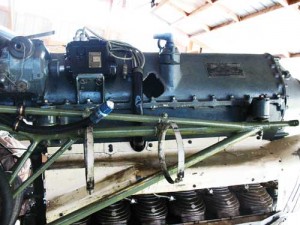 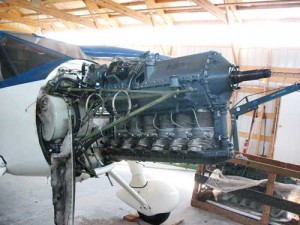 The wrist pin on the #3 piston on the 200 hp Ranger engine sheared and threw the piston off the connecting rod. Once this happened, the connecting rod became a jackhammer, pulverizing the piston and sending shrapnel through the engine block, causing a hole the size of an apple.