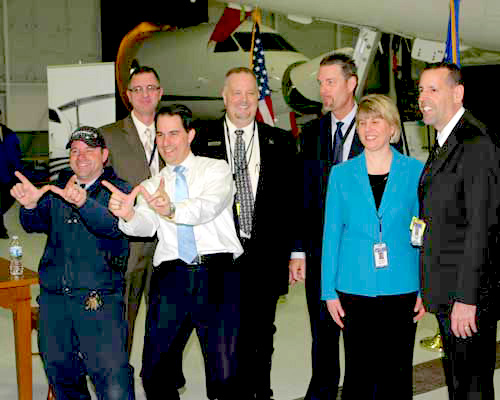 Wisconsin Governor Scott Walker showed his enthusiasm for what Senate Bill 348 will do for the state's economy in retaining and creating new jobs, and in increasing business and investment capital. Midwest Flyer Magazine Photo by Dave Weiman

APPLETON, WIS. (April 3, 2014) – After a year of lobbying by a coalition of state and national aviation organizations and businesses, Wisconsin Governor Scott Walker signed Senate Bill 348 into law April 3, 2014, exempting aircraft parts, maintenance and labor from sales and use tax, making Wisconsin competitive with the 36 other states that already have exemptions. The bill expands the current Wisconsin sales tax exemption that only applies to “commercial air carrier” aircraft to include all aircraft.

The argument was convincingly made that aircraft owners cross state borders for maintenance to save hundreds and thousands of dollars in sales tax. While the exemption will reduce sales tax revenue by an estimated $3 million per year, it is expected to generate more than twice that amount in increased business, jobs, income tax revenues, and investment capital.

“On behalf of Gulfstream Aerospace, it is my pleasure to welcome all of you here today,” said Toline. 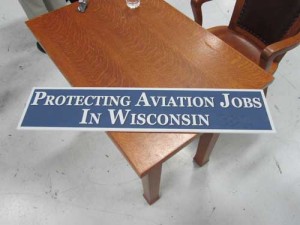 “This is a momentous day for Wisconsin’s aviation industry and is truly the result of a collaborative effort between the members of our vibrant community, including business, government, and economic development entities.

“I would like to express my gratitude to the partners that we at Gulfstream Aerospace worked with on this vital legislation: Outagamie County and our partners at the airport; the Fox Cities Chamber; Cessna; Wisconsin Aviation; EAA; NewView Technologies; the Aircraft Owners and Pilots Association; Wisconsin Manufacturers & Commerce; and the General Aviation Manufacturers Association.” In addition, the Wisconsin Airport Management Association (WAMA) and Wisconsin Aviation Trades Association (WATA) were supportive of the legislation, and rallied its members to contact their state representatives.

“Broad bipartisan support of the aviation industry and equitable tax cuts like the one being signed into law today, will allow our industry to compete across state lines, bringing business and jobs into Wisconsin. The commitment of Wisconsin lawmakers and Governor Walker to help Wisconsin’s private sector is evident in the signing of this bill.

“Today, it is my honor to introduce you to the governor of the great state of Wisconsin, Governor Scott Walker.”

Prior to signing the bill into law, Governor Walker told the crowd that Wisconsin’s aviation industry is very important to the state’s economy, and that he looks for even greater growth as a result of the bill.

Jeff Baum, President of Wisconsin Aviation, Inc., with locations in Madison, Watertown and Juneau, Wis., was on hand at the ceremonies and later said, “Aircraft owners win, as they just got a 5 to 5.5% reduction in maintenance costs…  Aviation businesses win, as they can now compete on an even playing field with businesses in other states… People working in the maintenance field will be the big winners as more work can be captured… And ultimately, the state wins as tax revenues generated by additional employment, additional work hours and additional business spending with vendors will far exceed the sales tax dollars lost.”

Baum expressed his appreciation to the legislators in Madison, who in the words of Senator Mike Ellis, ‘did something right.’

“At a time of partisan bickering nationwide on other issues, it is nice to see both Republicans and Democrats come together in Wisconsin and throughout the Midwest and the country, to enact legislation that will benefit their states’ economies and the aviation industry as a whole,” commented Dave Weiman, Editor and Publisher of Midwest Flyer Magazine. “Today’s signing of the legislation by Governor Walker is the recognition the aviation industry deserves for its contributions to the economy, statewide and nationally.”

The President and CEO of the General Aviation Manufacturers Association (GAMA), Pete Bunce, also attended the signing ceremony, and likewise praised Wisconsin legislators for their action. Governor Walker saw the importance of the general aviation manufacturing industry firsthand when he spoke at GAMA’s GA Jobs Rally, May 30, 2013, which was also held at Gulfstream in Appleton, Wis.