ST. CLOUD, MINN. – The Minnesota Airports Conference was held April 15–17, 2015 at the River’s Edge Convention Center in St. Cloud, Minn. The conference was sponsored by the Minnesota Council of Airports (MCOA) and the Minnesota Department of Transportation Office of Aeronautics, and facilitated by the Airport Technical Assistance Program (AirTAP) at the University of Minnesota.

The annual conference was held in conjunction with the Minnesota Council of Airports annual meeting, and included a tour of the Army Aviation Support Facility at St. Cloud Regional Airport (KSTC), updates from the Minnesota DOT Office of Aeronautics and Federal Aviation Administration, and topics ranging from the impact of General Aviation on state and local economies, to how unmanned aircraft systems will affect airport operations.

Among the featured speakers were Cassandra Isackson of the Minnesota DOT Office of Aeronautics, Jeff Hamiel of the Metropolitan Airports Commission, and Barry Cooper of the FAA Great Lakes Regional Office.

Cassandra Isackson emphasized that the Minnesota Office of Aeronautics wishes to assist all airports to reach their full potential and welcomes requests, feedback and involvement from the general aviation community.

Jeff Hamiel noted a trend for regional airlines to move to larger aircraft and decrease service to smaller communities. Hamiel is also supportive of the NextGen air traffic control system, and is involved in developing material on the subject, which is useful to airport officials.

Barry Cooper gave a status report on NextGen, stating that it is evolving, and provided a brief discussion on the 2020 ADS-B equipage rule. Cooper also noted what the NextGen Advisory Committee sees as priority focus areas that will provide the most visible benefits to system users in the shortest amount of time.

Cooper mentioned that discussions over FAA Reauthorization are ongoing.

Cooper briefly talked about Unmanned Aerial Systems (UAS) and noted that while the FAA is trying to integrate them into the National Airspace System, the FAA Administrator has clearly and repeatedly stated that system safety will always be priority #1 as the agency addresses and embraces new technologies. 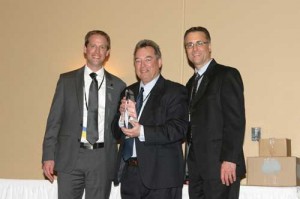 Accepting the MCOA Award of Excellence for lifelong achievement was Gary Schmidt, longtime Director of Reliever Airports for the Metropolitan Airports Commission. Schmidt is responsible for much of the success of the reliever system in the Twin Cities metropolitan area. (L/R) Joe Harris, Gary Schmidt, and Jeff Wig. Dave Weiman Photo 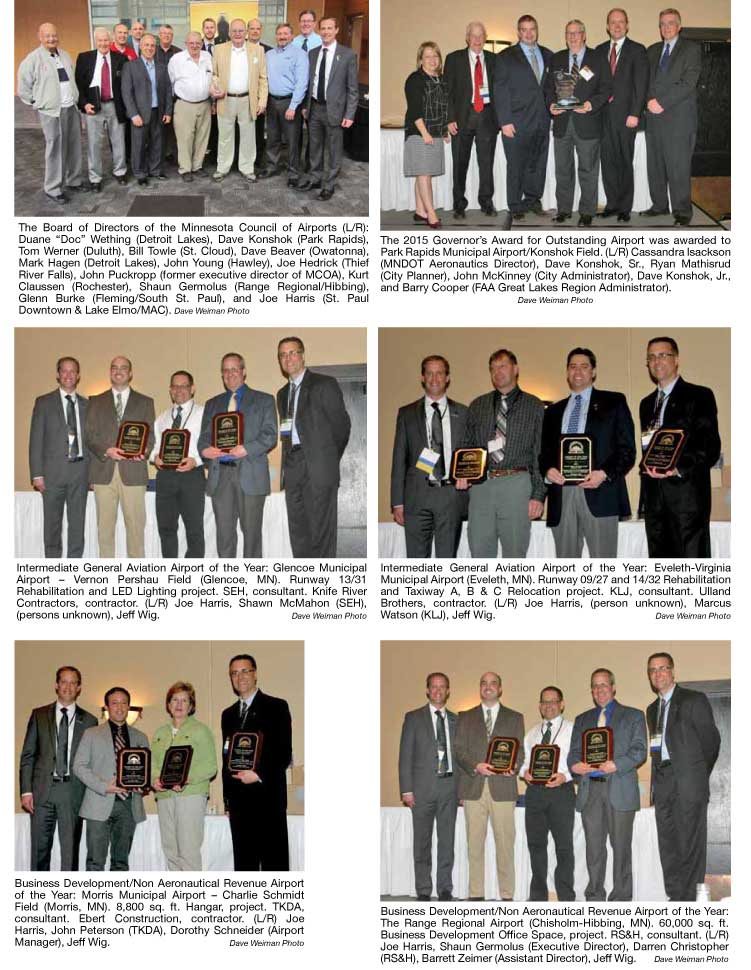 A number of airports and people were recognized during the conference, including the following and those featured in the photographs accompanying this article:

The 2016 Minnesota Airports Conference will be held April 20-22 at Madden’s On Gull Lake in Brainerd.  (www.mnairports.org).