The weekend event began with a barbecue at Surfside Seaplane Base (8Y4), 5 miles west of KANE in Lino Lakes, Minn., where dozens of seaplanes and hundreds of AOPA members converged for live music, pilot camaraderie and floatplane demonstrations.

A Grumman Albatross amphibious aircraft first flew into Rice Lake for some repeated dips in the water, by a skilled pilot, who handled the twin-engine transport as most would a single-engine airplane. 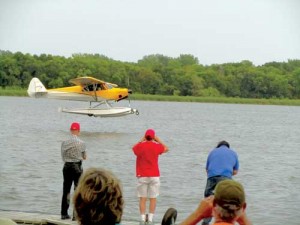 he pilot of this "Carbon Cub" put on a brilliant demonstration at the AOPA Fly-In barbecue, August 21, 2015, at Surfside Seaplane Base, Lino Lakes, Minn. The aircraft was flown by Christopher B. Cater, owner of Great Lakes Cubs, Cadillac, Michigan (www.greatlakescubs.com).

Christopher Cater of Great Lakes Cubs LLC of Cadillac, Michigan, performed an impressive demonstration in a Cubcrafters “Carbon Cub…” so impressive that at least one pilot who was with us at dinner was ready to sell his 30-year-old airplane and put down a down payment.

This airplane is the most rugged and exciting aircraft we have seen in the Light Sport Category. And if you thought that Light Sport was just for budget-minded beginners or for veteran pilots waiting for an elimination of the Third Class Medical, think again. On wheels or floats, the Carbon Cub SS has great performance.

The Carbon Cub SS is a thoroughly modern, high-performance airplane that has taken the fundamentally superior design of the Piper Super Cub and reinvented it using 21st Century materials, such as carbon fiber and computer-aided design technology. This has resulted in the aircraft having 50 percent fewer parts and being 250 pounds lighter than a similarly equipped Super Cub.

Mounting a lightweight 180 horsepower engine to the airframe results in a horsepower-to-weight ratio of 0.1364 or just 7.33 lbs/hp (compared, for example, to a Cessna 172R’s 15.33 lbs/hp). That results in a sea level climb rate of 2,100 feet per minute (compared to 650 fpm for a 172). Accordingly to the manufacturer, no other LSA takes off or lands in a shorter distance, with better low-speed manners. Once reaching 10,000 feet MSL, it can still climb at over 1,100 feet per minute.

If you are concerned about the safety of an LSA, don’t be. The Carbon Cub SS is inherently safe due to its extraordinarily slow stall speed. Vortex generators have been added to the fundamentally sound wing shape, which significantly increases low-speed maneuverability.

The airframe, while lightweight, is super-strong, and forms a protective cage around the occupants. It has been tested to greatly exceed the requirements for an LSA. The cabin’s reinforced harness attach points are actually the strongest parts of the airframe, according to the manufacturer. The pilot’s carbon fiber seat was designed for protection, as well as comfort.

Kits for the Carbon Cub EX-2 start at $75,000. You can buy a Carbon Cub SS with a 180 hp engine ready to fly for $184,990. The Carbon Cub FX is an extension of the Carbon Cub EX-2 kit and is in the builder assist program for $219,990. The FX includes a number of standard options, such as extended baggage with baggage door, 40-gallon long-range tanks, and an upgraded tailwheel. When completed, the FX is certified Experimental Amateur Built (EAB) and comes with a full factory warranty.

For additional information on all models of the Carbon Cub, call 231.633.UFLY (8359) or email chris@greatlakescubs.com.

Back at KANE on Saturday, there were tents set up for informational, educational and commercial exhibitors, and stages for speakers and seminars – similar in format as the former AOPA Expo, but just more condensed to fit the venue of an airport, versus a convention hall. Attending a one or two-day regional fly-in is a fraction of the cost of attending a four-day national convention when you consider registration fees, travel and lodging, so it is no wonder member attendance is much greater.

AOPA President Mark Baker was on stage at Golden Wings Museum with the museum’s founder, Greg Herrick, to talk about Herrick’s collection of rare and historic aircraft and some of their travels together over the years. (KANE is Baker’s home airport when not in Frederick, Md., and where he learned to fly.) 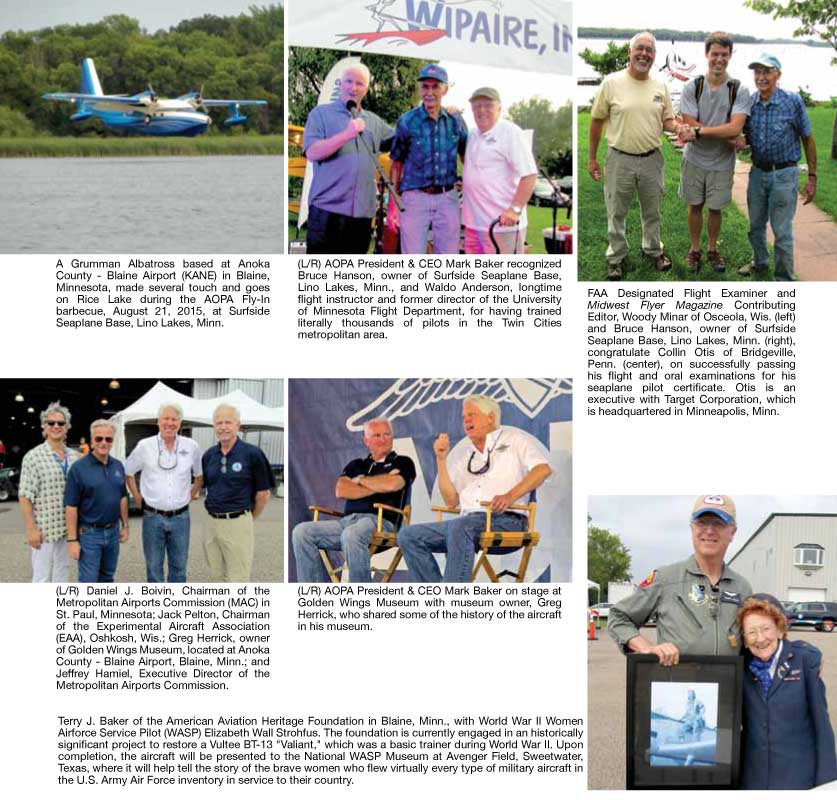 The 45,000 square-foot museum features close to 30 unique and one-of-a-kind aircraft from America’s Golden Age of Aviation (1920s-1930s). Among rarities are NASA’s first aircraft, a stainless steel amphibian and the first airplane in which a pope ever flew in.

One of six trimotors in the collection is a 1927 Ford Trimotor, which is America’s oldest existing airliner. Charles Lindbergh and Amelia Earhart are among the many notable aviators who have flown some of these unique and rare aircraft. Truly a one-of-a-kind collection of this era and one the Twin Cities can be proud to have at one of its seven airports (www.goldenwingsmuseum.com).

Also attending the fly-in was EAA Chairman Jack Pelton, and Jeff Hamiel, Executive Director of the Metropolitan Airports Commission. Newly appointed Anoka County – Blaine Airport Manager Glenn Burke made sure the airport was meeting the needs of pilots flying in. Strong southwesterly winds surely kept many pilots from flying in, but the location was an easy drive for thousands of pilots who live in the Twin Cities metro and western Wisconsin. A number of AOPA members from Illinois and Indiana either flew in themselves or commercially like they did for the annual AOPA Expo.

When Peggy and I departed KANE, we found the departure procedures well thought out by AOPA officials and Minneapolis Air Traffic Control and hassle free! Once we climbed to 9000 MSL, we no longer experienced the strong headwind we experienced on the ground and landed back in the Madison, Wisconsin area in 1 hour 45 minutes, beating the 5-hour drive and traffic on Interstate 94.

Brothers Randy and Dick Cross and their crew at Cirrus Flight Operations provided exceptional service during the fly-in with both full and self-service 24-hour fuel, tie-downs, car rental and lodging assistance when requested (www.cirrusflight.com).