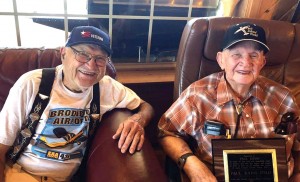 IOLA, WIS. – Central County Airport (68C) in Iola, Wis., known the world over for its multiple grass runways and Friday noon lunches, was renamed “Paul Johns Field” in honor of the veteran aviator who remains an icon at the airport. Dedication ceremonies were held August 14, 2015.

Paul Johns, 101, of Iola, has more flying hours, ratings, and hangar flying tales than most pilots could accumulate in 10 lifetimes.

Johns soloed in 1929 at age 15 in a glider after three 15-minute flying lessons. He went on to teach navigation and instrument flying for Pan American Airlines, and flew Pan Am Clippers on the San Francisco to Honolulu route. This, of course, was without GPS, VOR, or radar. Celestial navigation was the only reliable means of navigation for these flying boats on the long Pacific flights. The trips carried 3,800 gallons of fuel and 40 passengers, generally departed San Francisco before sunset, and arrived in Honolulu by sunrise.

Johns followed the Pan Am job with a corporate flying career in Wisconsin, and some acoustic research and development with Walker Exhaust in Racine, Wis.

He quit flying his experimental Kitfox at age 85, but at age 90, this tech-savvy aviator took a course in computer repair, and is not in the least intimidated by modern cyber-technology. He is also a licensed ham radio operator.

You can see Paul Johns at the airport most Fridays for its noon lunchs (http://centralcountyflyers.org).