In the last issue of Midwest Flyer Magazine, I wrote about the heading indicator and magnetic compass. In this issue, I am going to write about the “attitude indicator” with further emphasis on the pitot-static system, air-data computers and flight directors.

A perfect example of technology failure and pilots not being properly trained to handle the situation, comes to light in the 2009 crash of Air France Flight 447 from Rio de Janeiro, Brazil to Paris, France. The Airbus A330 plummeted 38,000 feet into the Atlantic Ocean in just 3 minutes and 30 seconds because the pilots lost vital airspeed data and the aircraft stalled. All 228 passengers and crew onboard were killed.

I recently was privileged to see the movie “Pilot Error” at a local theater that was based on this tragedy.

From the aviation side of this motion picture, I found it to be one of the most technically correct aviation films I have ever seen. A majority of the film was produced in Wisconsin and the highlight of the performance was the opportunity to meet the technical consultant and the co-star at the conclusion of the showing. The technical consultant (Robert Hesselbein) from Madison, Wisconsin, is an airline pilot, currently flying the Airbus for Delta Airlines. Hesselbein’s comments at the conclusion of the film were priceless.

This accident and several other high-profile airline and general aviation accidents have occurred because technology has failed, and the pilot did not know what to do. The Air France accident was the direct result of an iced-up pitot tube feeding an air-data computer with false information, which was displayed on the flight director. Many pilots who experience general aviation accidents have some of this equipment in their aircraft, and they have no idea how it works or how to use it.

The gyro instruments provided us a heading reference (heading indicator) that was superior to the magnetic compass. The attitude indicator allowed us to see if the aircraft was pitched nose up or down and if the wings were level or banking. These two gyros were typically driven by an air or vacuum pump on the engine. Should the pump fail in flight, we would lose these instruments and would need to use an electric-powered turn coordinator. This was one of a pilot’s worst fears while flying in IMC conditions.

As our technology changed, pilots began installing backup flight instruments for these failures, and our dreaded partial panel flying skill deteriorated to the point that most pilots cannot fly a “needle ball and airspeed approach.”

I do not remember when I saw my very first flight director, but like a lot of pilots who have them today, I did not know the proper method to use one. All flight directors that I have seen are associated with an autopilot.

A number of years ago, I provided instrument training for a pilot in a Bonanza who had a flight director that worked perfectly, but the servo portion was not working properly. He became one of the best flight director pilots I have ever flown with, and his muscles got a good workout each time he flew.

I mentioned earlier that many GA pilots do not know that they do not properly understand the flight director and cannot hand fly an approach using the command bars.

As a demonstration for my students,  I will cover up all of the instruments in the aircraft except the attitude indicator (flight director) and altimeter and hand fly an ILS approach. I do this once established on the glide path and localizer. Airspeed is a function of pitch, power and configuration, which we should have learned “flying by the numbers.” The flight director provides both the vertical and horizontal information, so we do not need the heading indicator or HSI. The altimeter that we did not cover up provides the decision height or altitude. Many pilots who previously did not know how the flight director worked, can now appreciate how valuable it is in the cockpit. 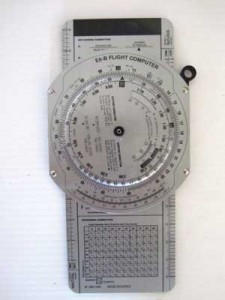 The basic flight director does not have altitude pre-select or an air-data computer associated with it as did the one involved in the Air France accident. To better understand air-data computers and the information they provide, we need to go back to the E-6B “wiz wheel” computer of yesterday (Fig 1). I can imagine that pilots who learned to fly in this decade may have never seen one.

One of the functions of the E-6B was to be able to determine true airspeed (TAS). To find TAS, we need indicated airspeed (IAS), aircraft altitude, and outside air temperature. Using the E-6B, we plug in that information and we have true air speed. We can also find what the wind direction and velocity were at the altitude we were flying using the E-6B manual. The air-data computer provides us with an electronic and instantaneous method of finding all of that information during a flight.

When I first had the opportunity to fly the UPS Technologies CNX80, which became the Garmin 480 later on, I was amazed to watch the box perfectly fly a holding pattern in a strong crosswind when coupled to a GPSS-equipped autopilot. This was due to the fact that there was an air-data computer providing the wind direction and velocity to the box. The Garmin 430/530 did not have this capability unless there was an air-data computer option installed. For the Air France accident, the fact that one component of the air-data computer system failed (airspeed), caused the flight director to provide invalid information, and the flight crew could not manually adjust for the problem. It was pointed out that if the pilot(s) would have gotten rid of the command bars and flown “raw data,” this catastrophe may have been avoided.

The movie was called “Pilot Error,” and after the cause of the accident was determined, the “iced pitot tube” scenario was incorporated in the simulator training for flight crews flying this aircraft. A majority of the flight crews reacted the same way to the erratic flight director as the Air France crew did, according to Robert Hesselbein.

If we remember from our primary training for an instrument rating, an iced-up or inoperative pitot tube will cause the airspeed indicator to behave as an altimeter. As we descend or put the aircraft into a dive, the airspeed will show a decrease due to trapped air in the instrument aneroid, compared to an increase in static pressure in the instrument case. The reverse is true in a climb. This is one lesson I learned very well, as I forgot to turn on the pitot heat during my instrument checkride, which was done in real IMC and icing conditions in the early 1970s. I figured this out on my own, as the pilot examiner grinned from the right seat.

There is a lesson that all GA pilots can learn from the movie “Pilot Error.” It is important to know your aircraft systems well, whether we are flying standard round gauges (6 pack) or a sophisticated system with a flight director and an air-data computer.

In a power-point presentation I am giving on aviation accidents and safety, four points that contribute to an accident are Skill, Knowledge, Judgment and Luck or the lack of one or several of them. I will elaborate on them in a future article in Midwest Flyer Magazine, but Knowledge, or the lack of it, was a major factor in “Pilot Error.”

Go see the movie “Pilot Error” when it plays at a theater near you, or you may go to the website and order it on DVD. The movie will entertain you and your family and get you thinking about the knowledge you have or don’t have about the equipment in your aircraft.

If you are unsure about the operation of your system, get some training from an expert. You may even find a glitch in your system or an improper installation.