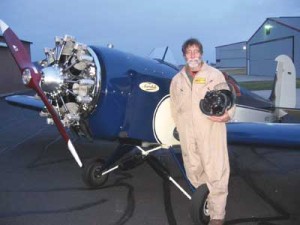 Having both survived two test flights, it’s time for a photo of the man and his machine. Ed Leineweber of Golden Age Aeroworks, LLC, with the first Aerolab “LoCamp” aircraft built from a production kit.

LoCamp N527CL, flown by Ed Leineweber, lifted off the runway at Tri County Regional Airport (KLNR) in Lone Rock, Wis., in early December after an extensive period of taxi-testing and minor adjustments. “When the moment finally arrived, everything fell perfectly into place,” said Leineweber, “The airplane flew beautifully, without a single squawk. The controls were light and harmonious, and the 110 hp Rotec R2800 radial engine, enthusiastically responded to throttle input.  If I was drawing an analogy to a living creature,” Leineweber concluded, “it would be to a fine, well-mannered, but spirited horse.”

While obviously appealing to nostalgic impulses, the Aerolab LoCamp is a state-of-the art aircraft under its 1930s-looking skin. Comprised of a CNC laser-cut and TIG welded steel fuselage and tail section, aluminum spars and ribs, push-rod controls and electric flaps and trim, the kit comes nearly complete except for paint, chemicals and glue, instruments and an electrical system. The covering package includes fabric, finishing tapes, inspection rings and fabric rivets.

Designed to be powered by the Rotec R2800 110 hp radial engine, the LoCamp is expected to cruise at 106 mph, stall clean at 45 mph, and flaps down at 41 mph. The empty weight of N527CL is 928 lbs. Sea level rate of climb is expected to be about 800 fpm. Range with full fuel at 1,320 lbs. gross weight calculates out to 523 statute miles, with a 30-minute reserve. (Additional specs and dimensions are posted on the company’s website, www.aerolabusa.com, including a link to the Rotec Aerosport site.)