Is It A Bird? Is It A Plane? No, It’s An Aircraft! | Midwest Flyer – General Aviation Magazine

With an anticipated million unmanned aircraft systems (UAS) sold over the holiday season, aviation is experiencing an unprecedented boost in “aircraft” ownership. Since the National Transportation Safety Board (NTSB) interpreted UAS as aircraft in the Pirker decision, the Federal Aviation Administration (FAA) has gleaned regulatory authority over UAS. 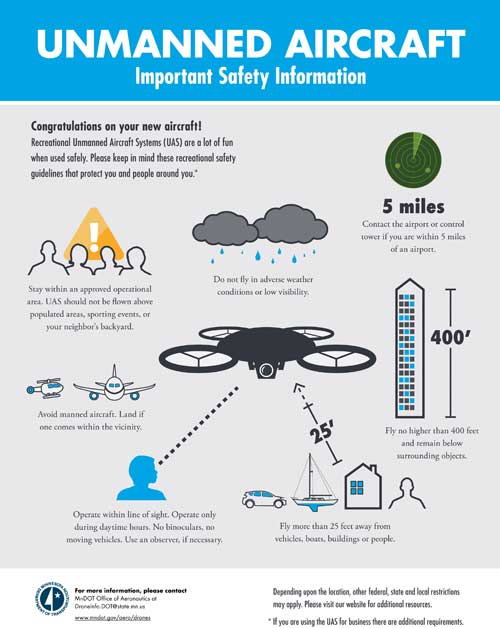 Most recently, the FAA instituted mandatory registration for all recreational UAS. UAS that weigh between 0.55 pounds and 55 pounds used for hobby must be registered with the FAA by February 19, 2016. That includes all model aircraft in existence prior to December 21, 2015. Registration results in a unique identifier for each operator; multiple aircraft can use the same registration number. Operators who register by January 20th, 2016 will be refunded the $5 registration fee. The MnDOT Office of Aeronautics does not register model aircraft.

Local airports have already begun experiencing an increase in calls related to UAS and MnDOT is ramping up education efforts so that local users and law enforcement can ensure legal operations and identify illegal ones. While the FAA is grossly under-funded to enforce all illegal operations, the FAA has indicated its willingness to fine operations that endanger the national airspace system.

As of yet, the FAA has not announced enforcement action against a recreational user, but the lack of information could be due to the FAA’s policy not to comment on enforcements against individuals. In October 2015, the FAA announced a $1.9 million fine against a commercial operator who conducted 65 operations in congested and restricted airspace above New York and Chicago. As with other UAS fines, it is likely that this amount will be heavily negotiated downwards.

With all the change surrounding UAS operations happening rapidly, there is likely to be some fallout. A few days ago, the FAA shutdown every model aircraft club site within 30 miles of the Washington, D.C. airport. Over 36 model aircraft clubs were impacted; a few had been in existence for a long time. Fourteen (14) of the 36 sites were accredited by the Academy of Model Aircraft (AMA), meaning that the sites complied with safety requirements and were not within the radius of an airport. The FAA was concerned with the concentration of model aircraft and the potential impacts to the national airspace system.

The AMA has filed a petition for review of the FAA’s Interpretive Rule that provides the underlying authority to regulate model UAS. Congress indicated its intent to step aside of regulating model aircraft in the FAA Modernization and Reform Act of 2012, Public Law 112-95. That law specifically prohibits new rules or regulations on model aircraft that are operated pursuant to a community-based organization’s standard, such as the AMA. It remains to be seen what will become of that case.

As with all rapidly evolving things, it also becomes a challenge for local communities to act in lockstep with the technological advancements. Minnesota has seen relatively few local regulations. The City of Saint Bonifacius, Minnesota has banned drones altogether. Several communities have considered or are considering restrictions placed on the operator or imposing areas that are no fly zones. A prohibition on all UAS could have harmful effects because model aircraft operators often drive innovation for the technology that supports commercial use of UAS.

The FAA supports several tools to help a recreational user understand the where and when you can fly a UAS. Knowbeforeyoufly.org is a wealth of information and a good place to start for a new operator. The FAA has also produced an app called “B4UFLY” that will help users visualize their location in relation to airports and any flight restrictions. The app is still in beta test mode, but is anticipated to be released to the public in the near term.

In order to operate safely within the national airspace system, an operator must have some appreciation for the safety of manned aircraft. Generally, following the AMA guidelines will keep the operations safe:
• Fly below 400 feet and remain clear of surrounding obstacles.
• Keep the aircraft within visual line of sight at all times.
• Remain well clear of and do not interfere with manned aircraft operations.
• Don’t fly within 5 miles of an airport unless you contact the airport and control tower before flying.
• Don’t fly near people or stadiums.
• Don’t fly an aircraft that weighs more than 55 lbs.
• Don’t be careless or reckless with your unmanned aircraft.