Since the 20th century, “Naval Aviation” has played a crucial role in combat. Eclipsing the battleship as the decisive weapon in war at sea, “aircraft carriers” have projected their powerful air wings, striking with surprise at enemy fleets and land bases, then disappearing into the vastness of the oceans with equal swiftness.

“Where are the carriers?” is the first question asked by American presidents whenever American interests are at risk, and at the start of every national security crisis, brought to light with our response to the attack on Pearl Harbor. Naval Aviation has also been at the cutting edge of aerospace expeditions, from the first successful crossing of the Atlantic by an aircraft, exploration of the Arctic and Antarctic, and journeys to outer space.

The National Naval Aviation Museum, located at Naval Air Station Pensacola, Florida, is responsible for selecting, collecting, preserving and displaying historic artifacts, which are related to the history of Naval Aviation. At the core of the museum’s collections are more than 700 aircraft — most of which are on display at other museums, with approximately 150 aircraft on display in Pensacola, representing Navy, Marine Corps, and Coast Guard Aviation. Included in the collection are record-setting aircraft like the Curtiss NC-4 flying boat, the first plane to fly across the Atlantic, as well as combat veterans, such as an SBD Dauntless that flew at the Battle of Midway, two Vietnam F-4J Phantom “MiG-killers,” an A-7 Corsair II that logged missions over Iraq during Operation Desert Storm, and the last F-14 Tomcat to fly a combat mission. 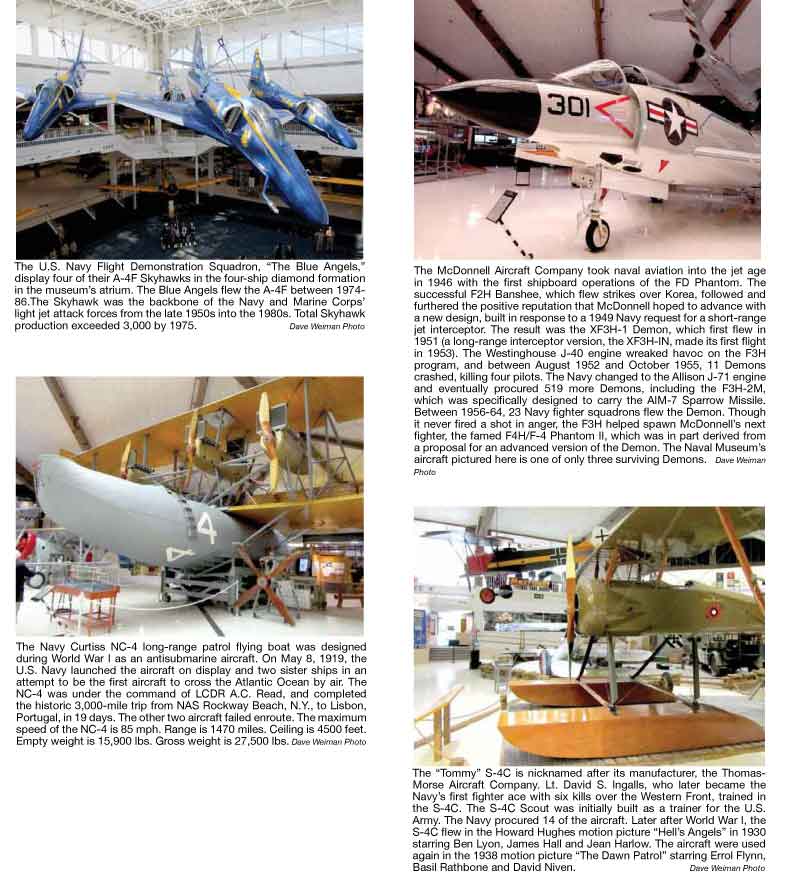 The museum’s West Wing is devoted almost exclusively to World War II carrier aviation and showcases a full-size flight deck replica of the aircraft carrier USS Cabot. Famous World War II aircraft, such as the Corsair, Dauntless and Hellcat, stand nearby ready for take-off, while other magnificent birds fly overhead. 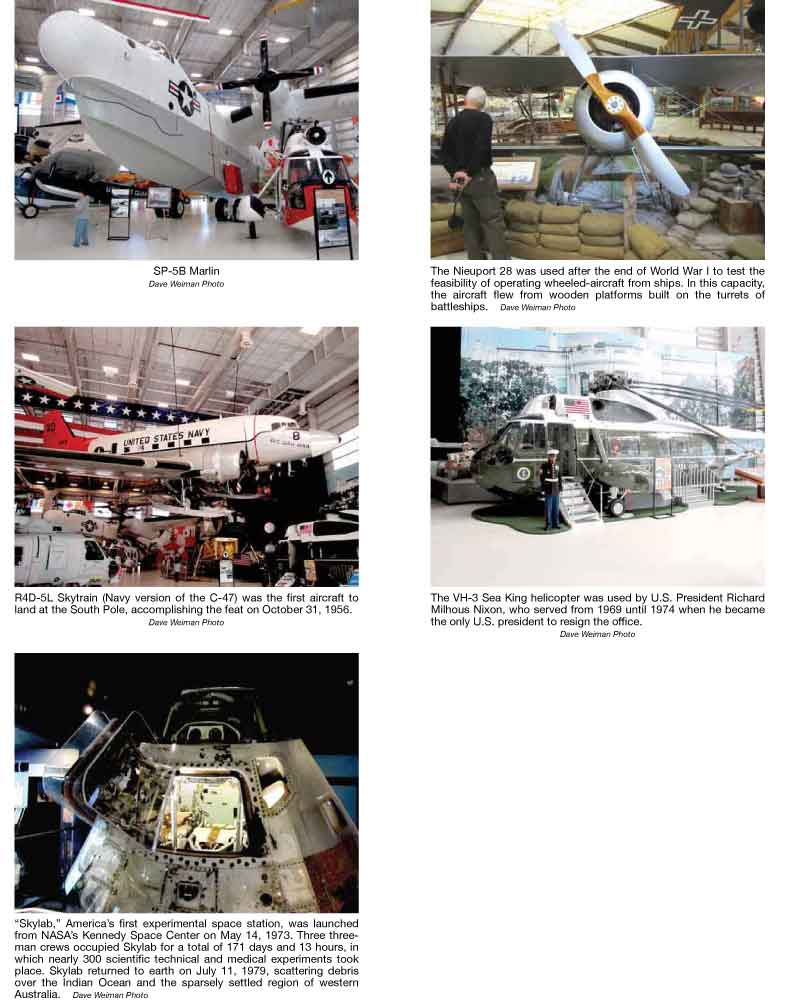 These historic and one-of-a-kind aircraft are displayed both inside the museum’s 350,000 square feet of exhibit space and outside on its 37-acre grounds.

While the aircraft are a major feature of the museum’s collection, there are more than 4,000 artifacts including uniforms, flight gear, weaponry, medals and decorations, also on display. In addition, the “Emil Buehler Naval Aviation Library,” which houses personal and official papers of prominent Naval Aviators, squadron records and a photograph collection numbering more than 350,000 images, is a significant repository of Naval history and draws researchers from around the world.

Established in 1914, NAS Pensacola is the oldest naval air station, and all Navy, Marine Corps and Coast Guard aviators and Naval Flight Officers pass through her gates at least during their initial flight training.

NAS Pensacola also serves as the home base for the “Blue Angels.” When not performing at air shows, the team can be seen practicing over the museum most Tuesday and Wednesday mornings from March to November. Practices typically begin at 11:30 a.m. (Central Time), and last about 55 minutes. Admission to practice sessions is FREE and open to the public. Earlier each year, the team practices in the desert near El Centro, Calif.

The 2016 Blue Angels show schedule kicked off on March 12 at the Naval Air Facility El Centro Annual Air Show, and concludes November 12 at the Blue Angels Homecoming Show in Pensacola.

The Blues have been flying the Boeing F/A-18 Hornet since 1986, and one of the team’s aircraft is proudly displayed outside and between exhibit buildings. An F-14 Tomcat is positioned on a pedestal at the entrance to the museum.

My favorite Naval aircraft is the Douglas A-4F “Skyhawk,” which was a premier light attack aircraft of the Cold War era. A-4s flew for Navy and Marine squadrons for 51 years, from prototype to retirement, and logged more Vietnam combat missions than any other naval attack aircraft. The A-4 also served for over a decade with the Blue Angels, their diamond formation depicted in the museum’s Blue Angels Atrium, where the aircraft are suspended in midair.

Of the four aircraft in the atrium, three were actually flown by the Blue Angels, and all four of the aircraft flew combat missions during the Vietnam War.

Such flight experiences are not reserved solely for Naval Aviators and journalists. In addition to the Blue Angels X4D® Experience, the museum offers guests the opportunity to fly in a full-motion simulator. And after your flight, you can enjoy a delicious lunch at the authentic Cubi Bar Café, decorated with more than 1,000 squadron and unit plaques reassembled from the historic Officers’ Club at Cubi Point in the Philippines.

Call it frosting on the cake if you will, but as Peggy and I walked out of the Viet Nam War Pavilion, we ran into some dear aviation friends from Wisconsin, and the president and chief executive officer of the Naval Aviation Museum Foundation, LtGen Duane D. Thiessen, USMC (Ret.), call sign “Drano,” who took us to his office and introduced us to members of his staff.

LtGen Thiessen was commissioned a Second Lieutenant in May 1974. His initial operational assignment was as an AV-8A Harrier pilot in which he completed numerous deployments to both the Mediterranean Sea and Okinawa. In 1982, he was assigned to Marine Aviation Weapons and Tactics Squadron One in Yuma, Arizona, where he served as an AV-8 tactics instructor. Lieutenant General Thiessen held several operational billets, completed Naval Command and Staff College in Newport, Rhode Island, and served as assistant to the AV-8B program manager in Naval Air Systems Command, Washington, DC. In June 1991, he reported to MCAS Cherry Point, North Carolina, where he assumed command of Marine Attack Training Squadron 203. His assignments took him back to Washington, DC, to attend the National War College and then to various commands throughout the U.S. and abroad. He retired as Commanding General, U.S. Marine Corps Forces Pacific.

Today, LtGen Thiessen is an active general aviation pilot, owns a 1967 Piper Cherokee PA-28, and is rebuilding a 1997 RV6. He was raised in Buhler, Kansas, so he qualifies as a “Midwest Flyer,” and enjoys attending EAA AirVenture Oshkosh each year. In fact, LtGen Thiessen was a Harrier demo pilot at air shows during the late 1970s and performed at Oshkosh.

“I was honored to serve, I had a riot of a time doing so, and I was privileged to have made the Marine Corps a career,” said Thiessen. “Today, my mission as president and CEO of the Naval Aviation Museum Foundation is to ensure that you, and all our guests, enjoy the experience of Naval Aviation history.

“Dave, please tell your readers about our museum and how we strive to offer them a personal and highly enjoyable experience.

“Tell them why people like yourself come back multiple times. THAT is the success of it all.”

LtGen Thiessen is married and is the father of two grown children, and a grand parent of three grandchildren. His son followed in his footsteps and also became a Marine Corps aviator, and is now flying commercially in the firefighting business, while his daughter followed in his wife’s footsteps, and married someone in the military.

For those of us who marvel with the vertical takeoff capability, maneuverability and overall performance of the AV-8A Harrier at EAA AirVenture Oshkosh most years, we can get a close-up look at the aircraft on display at the National Naval Aviation Museum and sit in a trainer.

LtGen Thiessen is proud of the museum’s outreach to young people, whether it is hosting school tours, or promoting the museum’s one-week “National Flight Academy” for students in grades 7 thru 12. In the National Flight Academy, students enter a totally immersive, STEM (Science, Technology, Engineering, and Mathematics) focused activity in a facility that looks, sounds, and feels like an actual Navy aircraft carrier.  They sleep in ship’s berthing, they eat in a mess hall.  The Joint Intelligence Center is the classroom. They brief in ready rooms and conduct operations based on what they have learned from Command Centers and in 30 integrated aircraft simulators. College credit is available through the University of West Florida upon course completion.

For children grades K thru 6, the museum offers “STEM Saturdays,” one-day learning experiences on a variety of topics (http://www.nationalflightacademy.com/).

The National Naval Aviation Museum in Pensacola is part of the Navy’s museum system, the largest of 12 official Navy museums located throughout the United States. Information about the Navy museum system can be found at the Naval History and Heritage Command website: http://www.navalaviationmuseum.org/