This year’s recipient of the FAA/Minnesota Governor’s Award – Crookston Municipal Airport – Kirkwood Field (KCKN) – has all of these attributes: history, longevity, community, business, and family. This award, and many others, were presented during the Minnesota Airports Conference, April 22, 2016, at Madden’s On Gull Lake, Brainerd, Minn. 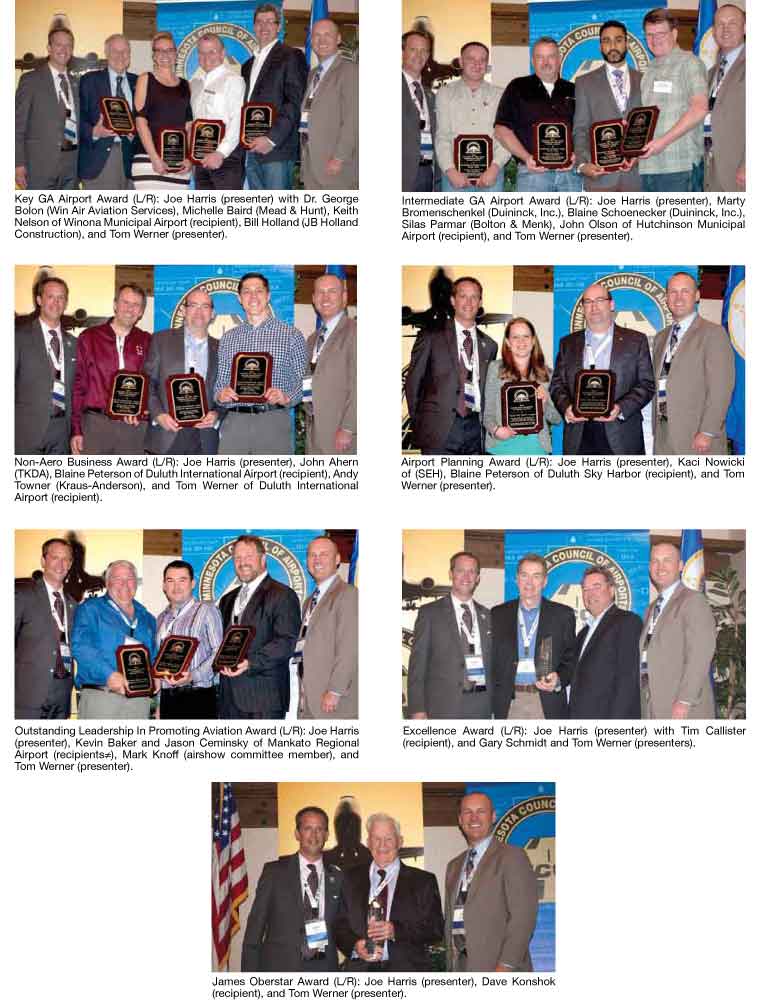 The first airport in Crookston was a round turf runway used to train glider pilots during World War II. In 1943, the city purchased 644 acres of land and established what is now Crookston Municipal Airport – Kirkwood Field. The airport is named in honor of the mayor at the time, an early proponent of the airport.

Throughout the 1940s the airport operated three turf runways, each 3000 feet in length. In 1964, Runway 13/31 was paved and extended to 3500 feet. Throughout the ’70s, ’80s and ’90s, the airport continued to grow, pave and extend runways, added taxiways, built a terminal, improved parking facilities, and added navigational aids and hangar space. Additional land was purchased providing the city needed right of way and ensuring an airport safety zoning. Today, the airport encompasses approximately 700 acres, and has three runways and one parallel taxiway. The fixed base operation operates two conventional hangars. There are four T-hangars, an airport manager’s house and one storage building.

Crookston Aviation Service provides management for the airport. The airport manager, Lowell Miller, and his family provide the airport with everyday operations and maintenance, and have been associated with the airport since the early 1980s. The Crookston Airport Commission governs the airport.

The airport provides the necessary amenities so transient pilots can access the local community via a courtesy car and obtain fuel from a self-service fuel station 24 hours a day. Both 100LL and Jet fuel is available.

The airport is well maintained. Not only is the grass cut and the snow plowed, but the areas around the runways are groomed and the approaches are kept clear of obstructions. The pavements are being regularly maintained and the building is clean and welcoming, especially on cold winter mornings.

Located in the farmlands of the Red River Valley, the airport supports three aerial applicator businesses. There are two farm lease tenants utilizing over 300 acres of land. One of the farm lease tenants is part of University of Minnesota Crookston through the College of Food, Agriculture & Natural Resource Sciences for the Northwest Research and Outreach Center. The University of North Dakota bases aircraft at Crookston and the airport is active with flight instruction year around.

Crookston has a vibrant aviation community that supports more than 40 based aircraft. The efforts of the operators and airport management, combined with local community support, make Crookston a model airport and well deserving of the FAA/Minnesota Governor’s Award for 2016.

The FAA/Governor’s Award was presented by the Federal Aviation Administration Great Lakes Regional Office in cooperation with the Minnesota DOT Office of Aeronautics and Governor’s Office.

Other awards presented included “Projects(s) of the Year” for airport projects completed in the previous year, which have made a significant improvement to airport operations. The project(s) could be singular, multiple, or a combination of projects that resulted in improved airport efficiency, safety, or facility enhancement.

The construction phase of the project was completed over two years at a combined project cost of approximately $12 million. This project required a complex phasing schedule, a bidding process to allow sponsor flexibility, constant coordination with users, utility relocations, land acquisition, obstruction removal and project funding coordination. Other issues included coordination with federal and state agencies, payment coordination with contractors, and variables that required adjustments over a multi-year project. The multi-year airport improvement project was substantially completed in November 2015 with the commissioning and dedication of a brand new 5,680 x 100-ft. bituminous runway with new approach lighting (MALSR), PAPI, REIL and MITL. The new runway is also equipped with a new glide slope on Runway 30 and PAPI approach lights on both runways, 12 and 30. Mead & Hunt was the consultant. JB Holland Construction of Decorah, Iowa, was the contractor.

Hutchinson Municipal Airport, Butler Field, received the “Intermediate GA Airport Award” for its Runway 15/33, Taxiway A and Apron Reclamation project. Full reconstruction of the runway, taxiway, and apron, which were originally constructed in 1994, was initially discussed. However, due to the limitations of available state apportionment and federal non-primary entitlement funds, full reconstruction of all pavements as part of one project was not possible.

Full Depth Reclamation (FDR) is the process of pulverizing the entire thickness of bituminous pavement and blending it with the underlying aggregate base to form a recycled base suitable for paving with new bituminous. By utilizing the FDR process, the city was able to save a substantial amount of money by recycling the existing pavement section in lieu of providing virgin aggregates. Utilizing FDR greatly reduced construction time for the project allowing construction to be completed in less than two months. Construction of the project began on August 24, 2015 and was completed on October 30, 2015. The consultant for the project was Bolton & Menk, Inc. The contractor was Duininck, Inc. of Prinsburg, Minn.

Duluth International Airport received the “Non-Aeronautical Business Development Award” for making a significant contribution to the betterment of its airport through non-aeronautical business development. The project focuses on the improved economic viability of the airport through revenue generation, unique financing and/or community engagement.

In 2015, the Duluth Airport Authority and Lake Superior College renovated a military hangar to create a new home for the Center for Advanced Aviation, a popular program at the college that trains professional pilots and maintenance technicians to work in the region’s growing aviation market.

The proposed project transformed 20,000 square feet of hangar space and 20,000 square feet of office and shop areas into a specialized hands-on training facility. The hangar bay was renovated into the center’s maintenance training area, and the remaining spaces were transformed into academic offices and general classrooms with simulators and shop facilities. Utilities, including water, sewer and electrical, were upgraded to accommodate the new facility usage. The 3.5-acre property has a concrete paved apron and parking, and the entire site is located on DAA property and controlled by security gates and fencing. The main hangar bay became the center’s hands-on maintenance training area and is supplemented with a paint booth, tool cribs, and a new welding shop. Remaining spaces were reconfigured for new classrooms, a student lounge, staff offices, administrative offices and a conference room. A simulator room, flight operations offices and pilot training facilities were added to the pilot training area. The space was designed to be flexible, adapting to the needs of Duluth’s growing aviation sector that includes both Cirrus Aircraft, an aircraft manufacturing company developing a new jet program, and AAR, a commercial jet maintenance facility currently serving Air Canada. The consultant was TKDA. The contractor for the project was Kraus-Anderson.

The award is presented to the airport sponsor that has surmounted extraordinary circumstances or created unique solutions in planning, environmental compliance or developing strategic initiatives at their airport.

The EA/EAW evaluated alternatives that would safely meet the needs of airport users and provide a long-term solution that balances the sensitive natural resources in the area through shortening the runway to 2,600 feet and relocating it into Superior Bay. The project results in approximately 7.5 acres and 70,000 cubic yards of fill. The FAA issued a Finding of No Significant Impact (FONSI)/Record of Decision (ROD) in May 2015. An airport layout plan was also completed concurrently with the EA/EAW process and was approved in July 2015. The consultant for the project was Short Elliott Hendrickson, Inc (SEH).

Mankato Regional Airport, Sohler Field, was recognized for its “Outstanding Leadership in the Promotion of Aviation in Minnesota” in producing the “Minnesota Air Spectacular 2015” air show.

The city of Mankato hosted the Minnesota Air Spectacular 2015 air show, June 27-28, 2015, in partnership with Verizon Wireless Center. The city of Mankato was able to secure the U.S. Air Force Thunderbirds, U.S. Army Golden Knights, U.S. Navy TAC Demo Team and several national and world-caliber air show performers to participate in the show. This was the only Minnesota air show in 2015 that had a military demonstration team.

The air show was heavily marketed throughout the state and drew over 35,000 attendees. In addition, the air show committee set up several venues to further promote aviation. The committee worked with the local EAA chapter, Sean D. Tucker of Team Oracle, and other acts to provide flights for the EAA Young Eagles program in which Tucker chairs. The Thunderbirds also met with over 200 elementary and middle school age children to motivate them to go into military and/or aviation-related career fields.

Airport engineer Tim Callister, AAE, received the “MCOA Award of Excellence” for demonstrating a quintessential devotion to all aspects of aviation over a sustained period of time (similar to a lifetime achievement award). Callister was one of the four airport professionals who founded the Minnesota Council of Airports (MCOA) in 1983. He has more than 45 years of aviation experience, and has managed airports ranging in size from small general aviation airports to one of the busiest major hub airports in the United States – Minneapolis-St. Paul International Airport (MSP). Callister helped pioneer MCOA with the premise of collaboration as an important axis for building a strong Minnesota airport community. In 2010, Callister was formally presented with the Distinguished Flying Cross, the Bronze Star, and a fistful of other medals that had been quietly slipped into his military file as pieces of paper during his service in the U.S. Army during Vietnam from 1968-71.

Callister served in the United States Army from 1968-91, was airport director with the Metropolitan Airports Commission from 1974-2004, and since 2005, he has been a senior aviation planner with Mead & Hunt.

Receiving MCOA’s “James L. Oberstar Award” for 2015 was David R. Konshok of Park Rapids, Minn. This prestigious award named in honor of an elected official who did much to better aviation and air transportation in Minnesota and nationwide as a member of the U.S. Congress (1975-2011), is reserved for those special individuals who have demonstrated a strong interest and commitment to aviation and airport development in the state.

Konshok served as a radioman in the U.S. Navy and later studied business administration. He received his private pilot certificate in 1956, then began working for the improvement of the Park Rapids Airport and joined the airport commission, a position he held for 60 years to build strong relations between the airport and the city, push for zoning changes, work on tenant leases, and lobby in St. Paul for grants and funding for airport improvements.

In 1968, Konshok was instrumental in founding a local Civil Air Patrol squadron and served as its commander into the 1980s. Konshok is a charter member of the Minnesota Council of Airports (MCOA), which adopted its bylaws on April 27, 1983, at its first annual meeting. In 2013, Konshok was inducted into the Minnesota Aviation Hall of Fame, and Grand Rapids Municipal Airport was renamed Konshok Field.

The Minnesota Airports Conference is sponsored by the Minnesota Council of Airports and Minnesota Department of Transportation Office of Aeronautics, and facilitated by the Airport Technical Assistance Program (AirTAP).