Birthplace of Aviation… An Air Trail Around Ohio 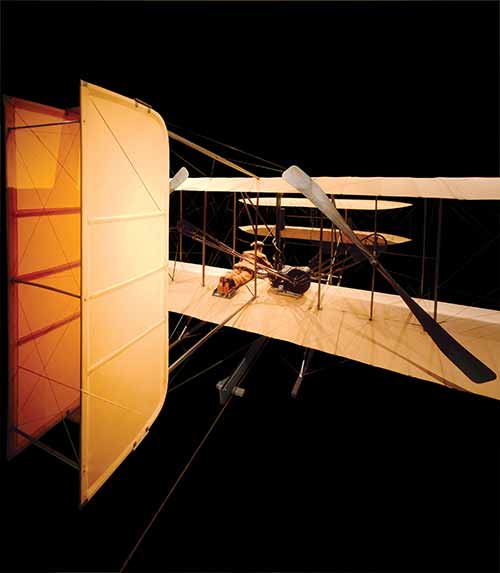 Ohio, the “Birthplace of Aviation,” has been home to countless aviation inventions, the birthplace of many pioneering aviators, the cradle of the aviation industry, and the location of important events in the history of flight. Though the famous flight testing for The Wright Flyer was done at Kitty Hawk, North Carolina, the Wright brothers were born in Ohio and performed all their experiments that led to the invention in their home state. This air trail is just a sample of some of the things you can see, do and experience (aviation and not) throughout the state of Ohio, from northeast to southwest (or vice versa). 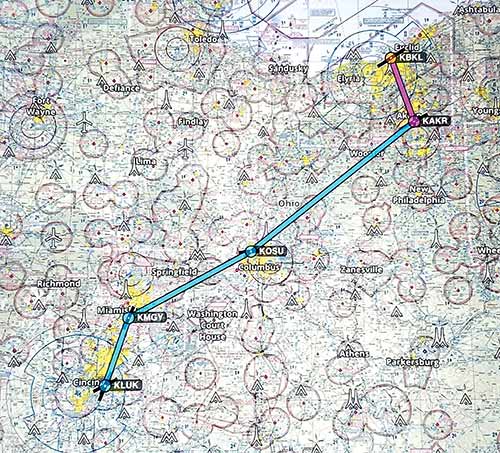 Our route throughout the state of Ohio: Cleveland, Akron, Columbus, Dayton and Cincinnati.
Image Courtesy of ForeFlight

Downtown Cleveland is pretty quaint with nice areas by the Cuyahoga River and Lake Erie, many restaurants, bars, the West Side Market, museums (the most famous is probably the “Rock and Roll Hall of Fame”), a zoo, an aquarium, the USS Cod submarine, sports venues, and a botanical garden among other things. 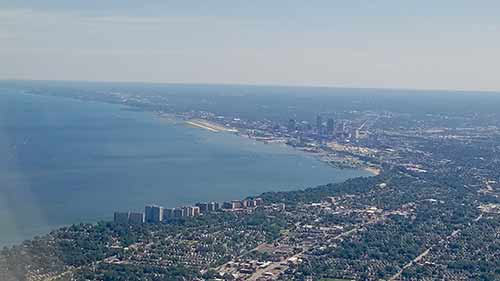 Burke Lakefront Airport (center), along the shores of Lake Erie in Cleveland, Ohio.

Burke Lakefront Airport (KBKL) (https://www.burkeairport.com/) is a great airport to use if downtown is your destination. The International Women’s Air and Space Museum (http://iwasm.org/wp-blog/) is on the field. It is open daily from 8:00 am to 8:00 pm and there is no charge! Also, keep in mind the airport has a fairly large airshow, the “Cleveland National Air Show” (https://www.clevelandairshow.com/) every year, usually around Labor Day. 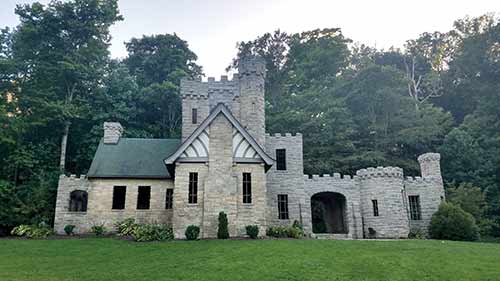 Instagram favorite (especially for couples taking professional photos) is “Squire’s Castle” in the North Chagrin Reservation (https://www.clevelandmetroparks.com/parks/visit/parks/north-chagrin-reservation). Either KBKL or Cuyahoga County Airport (KCGF) (http://publicworks.cuyahogacounty.us/en-US/County-Airport.aspx) would be your best destination airport to reach the castle. 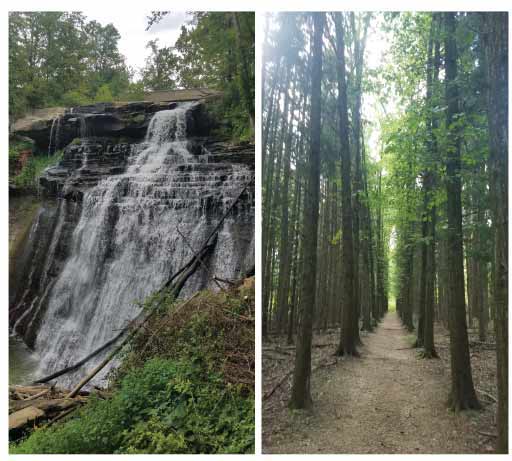 You know I’m always going to advertise our National Parks. Between Cleveland and Akron, you can find Cuyahoga Valley National Park (https://www.nps.gov/cuva/). While it is not a “one of a kind,” it is worth spending at least a full day there. You can go fishing/kayaking on the Cuyahoga River, hike (for example, around Brandywine Falls), bike (for example, on the Ohio and Erie Canal Towpath Trail), and/or take a scenic train ride through it. From January to May, the National Park Scenic excursion is a 2-hour 30-minute round trip. From June through October, the train runs Wednesday thru Sunday on an extended schedule. Peninsula, the little town in the middle of it, is cute and a good place to stop for lunch. If you decide to bike on the Towpath Trail, you can take the train back after you’re done. The train can be flagged down at boarding stations by waving both arms over your head. 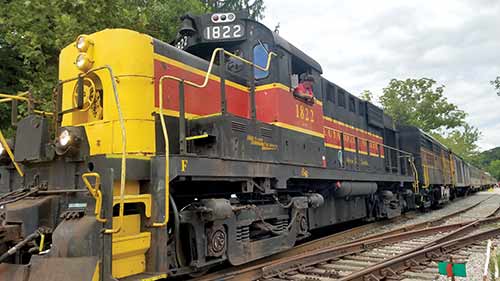 You can access the park from a variety of airports: Medina Municipal (1G5), Kent State University (1G3), Wadsworth Municipal (3G3), Weltzien Skypark (15G), or Akron Fulton International (KAKR) for example. Wherever you land, rent a car and visit the park.

In addition to Cuyahoga Valley National Park and Kent State University’s aviation program (https://www.kent.edu/cae), if you have kids or grandkids entering the college world, Akron has other things you can visit, such as the Stan Hywet Hall and Gardens and a zoo.

But, more importantly, have you seen the “Goodyear Blimp” at events around the country, including EAA AirVenture Oshkosh? Well, the Goodyear Tire and Rubber Company maintains three operational bases (https://www.goodyearblimp.com/behind-the-scenes/airship-bases.html) and one of them (in fact, the headquarters) is in Suffield, southeast of Akron. Each base ensures that the blimp is ready to soar above its next destination.

Built in 1917, the Goodyear Airship Hangar at Wingfoot Lake is the company’s oldest airship facility and one of the oldest active aircraft bases in the world. In addition to a maintenance and construction facility for Goodyear’s blimp fleet, it is currently the home to Goodyear’s new semi-rigid Zeppelin airship, “Wingfoot Three.” Based on its contributions to Lighter-Than-Air, aviation in general and military significance during World War I and World War II, the Goodyear Airship Hangar at Wingfoot Lake was awarded an Ohio historical marker in 2018. You may be able to schedule a visit ahead of time.

Wingfoot Lake also has a state park you can visit (http://parks.ohiodnr.gov/wingfootlake).

Akron Fulton International Airport (KAKR) (http://akronfultonairport.com/) is your best bet for visiting the city and its surroundings.

Columbus is the capital of Ohio, so as such, you can always visit their capitol or statehouse. Additionally, Columbus is known for Easton Town Center – the city’s most popular restaurant and shop area, the Franklin Park Conservatory, the science education center called Cosi, the German Village, the Short North Arts District, and North Market, rated as one of the nation’s top farmer’s markets.

Ohio State University (KOSU), also known for its aviation program, Bolton Field (KTZR), and Columbus Southwest (04I), are the closest airports to town. The first two have towers and the last one does not.

If we had to choose an aviation birthplace city within the state, it would be Dayton. To honor that, the National Park System (NPS) has the Wright-Dunbar Interpretive Center and the Huffman Prairie Flying Field Interpretive Center (https://www.nps.gov/daav/planyourvisit/visitorcenters.htm). While in town, you can also visit the John W. Berry, Sr. Wright Brothers Aviation Center where you can actually see the (restored) 1905 Wright Flyer III, the only plane to have earned the status as a national historic landmark.

Aside from aviation, Dayton is also known for its performing areas (i.e. philharmonic, dance, opera, theater). 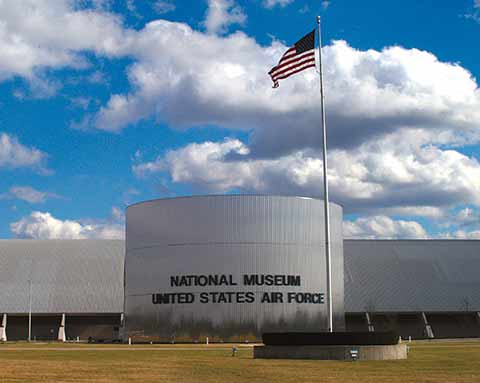 Dayton-Wright Brothers Airport (KMGY) (http://www.flydayton.com/dayton-wright-brothers-airport/), renamed as such on December 6, 1995 to honor the Wright brothers’ accomplishments, is a General Aviation (GA) airport in Miami Township, approximately 12 miles south of Dayton. It’s not the closest airport to town, but one you want to visit. The airport is home to Wright “B” Flyer (http://www.wright-b-flyer.org/), a museum honoring the accomplishments of the Wright brothers. It operates a growing fleet of “lookalike” reproductions, including a historically accurate and beautifully crafted replica of the Model B airplane, which visitors can arrange to fly in! They are open on Tuesdays, Thursdays, and Sat 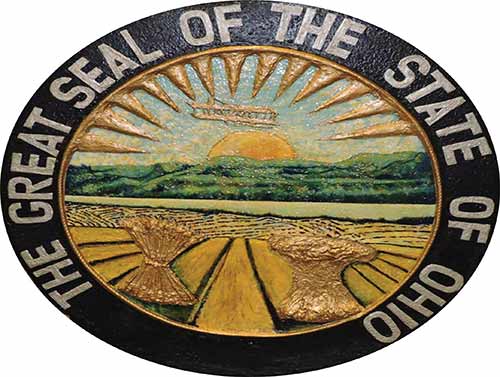 Ohio shows pride in its aviation heritage by featuring the “Wright Flyer” on its state seal.

Cincinnati, the “Queen City” (and my husband’s third home) has a lot of buildings registered on the National Register of Historic Places. Visits to Over-the-Rhine District and German-style MainStrasse Village are recommended. You can stroll through Eden Park or Smale Riverfront Park, a number of museums (some of which are in Over-the-Rhine), attend sports events, see the Cincinnati Arch, visit the country’s second oldest zoo, and/or go 49 stories high on Carew Tower (https://cincinnatiusa.com/things-to-do/attractions/carew-tower-observation-deck) for the best views in town.

Cincinnati Municipal Airport – Lunken Field (KLUK) (https://www.cincinnati-oh.gov/dote/lunken-airport/) is the closest airport to downtown, and like the rest of the city, has a lot of history. When it opened in 1925, it was the largest municipal airport in the world, the original terminal has the oldest standing Air Traffic Control Tower, and it was the birthplace of American Airlines. You can learn more about the airport’s history in this recent article: https://www.onlyinyourstate.com/ohio/cincinnati/lunken-airport-cincinnati/.

Lunken Field has its own bike path surrounding the airport and it connects with the Ohio River Trail which leads to downtown (https://www.traillink.com/trail/lunken-airport-bike-path/). What a great thing to have, especially with the current security environment everywhere. It reminds me of San Antonio and I love it! And, if that was not enough, the Sky Galley Restaurant on the field offers great views from their patio while enjoying a meal. Like Cleveland’s Burke Lakefront Airport (KBKL), KLUK also has its largest event, “Lunken Airport Days” (http://www.cincinnatiwarbirds.org/), over Labor Day weekend. The event offers free admission and parking.

Let’s go out and explore! Fly safe and fly often!

EDITOR’S NOTE: Yasmina Soria Platt has been with the international airport planning and development consulting firm AECOM since 2016. She also writes an aviation travel blog called “Air Trails” (www.airtrails.weebly.com), in addition to articles on pilot destinations for Midwest Flyer Magazine. Pilots can locate articles Yasmina has written by going to www.MidwestFlyer.com and typing in her name in the search box.