If you have applied for an FAA medical certificate, you know an applicant must complete FAA Form 8500-8GG via MedXPress and answer the questions on the form. The FAA uses the information disclosed on the application to determine whether an airman is qualified to hold a medical certificate issued under 14 C.F.R. Part 67. 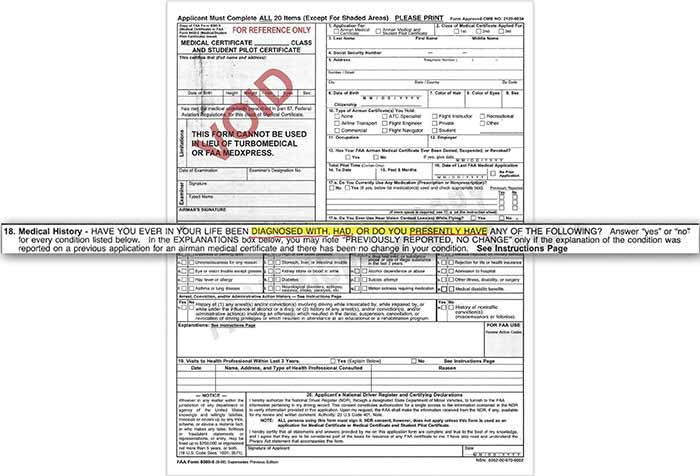 Question 18 asks for information regarding various medical conditions and circumstances that could have an impact on an airman’s medical qualification. The preamble to Question 18 asks the applicant in all caps whether he or she has “EVER IN YOUR LIFE BEEN DIAGNOSED WITH, HAD, OR DO YOU PRESENTLY HAVE ANY OF THE FOLLOWING?” The airman is required to answer “yes” or “no” and, if “yes,” he or she must provide an explanation to the FAA.

Unfortunately, some airmen get hung up on the word “diagnosed” and either ignore or fail to consider the broader wording in the rest of the question. An example of this situation occurred in the case of Administrator v. Smith.

Consistent with Order 2150.3C, FAA Compliance and Enforcement Program, the FAA revoked all of the airman’s certificates for violation of 14 C.F.R. § 67.403(a)(1) (intentional falsification). After a hearing, the National Transportation Safety Board Administrative Law Judge affirmed the FAA’s order of revocation.

On appeal to the full Board, the airman argued, among other things, that he did not know he had been diagnosed with a mental disorder because his doctors didn’t share their formal diagnosis with him. However, the Board rejected this argument.

The Board held the airman’s argument improperly attempted to narrow the scope of the preamble to Question 18 and, specifically, Question 18(m) (asking about “mental disorders of any sort; depression, anxiety, etc.”).  The Board stated:

[i]t is clear from the text of the form and both versions of the accompanying instructions, that item 18(m) is not limited to a formal diagnosis. Rather, any medical “condition” is to be reported. The existence of an underlying condition is not dependent on [the airman] being told the formal diagnosis or condition.

It went on to conclude that even if the airman was not told of the formal diagnosis, he was still aware of an underlying condition for which he sought treatment. As a result, the airman’s checking the box “no” in response to Question 18(m) was a false statement, and a violation of the regulations.

Unfortunately, this situation occurs more often than it should. And the FAA’s response to falsification is predictable and unforgiving: revocation of all certificates.

When you are applying for a medical certificate, it is important that you read the questions carefully. If you are concerned about whether something should be disclosed, do your research first. Talk to your AME before you go in for your examination. Or talk to an experienced aviation attorney who can help you understand the question and determine whether your circumstances require you to check the “yes” box.