Some of the Pilots Who Flew To EAA 2021 & Their Airplanes 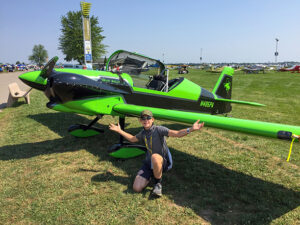 Easton, “The Kid Reporter,” with a Panther LS, which is owned by Sean Sullivan of Fort Worth, Texas. Dave Weiman Photo

Hi guys and gals! Welcome to another article about EAA AirVenture Oshkosh from yours truly, “Easton, The Kid Reporter.”

I met many people this year (2021), from volunteers to people who have owned – or own – from one to as many as six or more airplanes. I will describe their intros into aviation and much more! I hope you enjoy my article.

My adventure began like this… My grandparents and I started by walking through the main gate at AirVenture. Security checks was the norm… It didn’t matter how young or frail you were, or who you were… All bags needed to be checked, and that’s a good thing! But what am I waiting for? Let’s get started with my first interview. 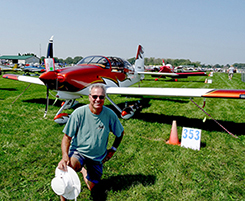 Mark Baty, a retired mechanical engineer from Georgetown, Kentucky, grew up in Cedar Rapids, Iowa, and got his first job there at Rockwell Collins – the multinational corporation, providing avionics and information technology systems and services to government agencies and aircraft manufacturers. 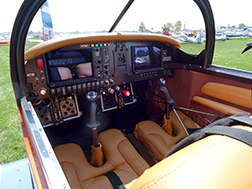 When I met Mark in the aircraft display area which is reserved exclusively for Van’s Aircraft RVs, of which nearly 11,000 have been built so far, he was standing proudly by his RV-9A which he built himself and flew to Oshkosh this year. The airplane took Mark less than 5 years to build…a total of 3,300 hours. He finished the project just in time for EAA, and even flew away with top honors. Mark was one of several homebuilders to receive an Outstanding Kit Award for Workmanship. Nice going, Mark!

All of Van’s RVs, from their single-seat RV-3, to the latest RV-14, are all-aluminum, low-wing monoplanes of monocoque construction (https://www.vansaircraft.com/), and as you can see from the photos that accompany this article, the builder can paint them any way they want.

Mark has been coming to EAA for 15 years. As his career in mechanical engineering evolved, he moved to Detroit, Michigan and worked for Ford Motor Company, a major sponsor, by the way, of EAA AirVenture Oshkosh. Thank you, Ford Motor Company!

Next up was Tom Potts. Tom is also from Kentucky and resides in Louisville. He has been coming to EAA for 20 years and has been a volunteer for the past 5 years. Tom’s wife typically accompanies him to AirVenture, however, sadly, she had knee surgery and was unable to attend this year.

It took Tom two years to build his RV-10A, and he still found time to help a friend build his RV-6A. How nice is that? 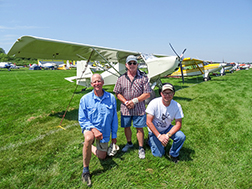 Next up was Glen Marshman of Longmont, Colorado. The plane Glen flew to Oshkosh this year, his 20th year at AirVenture, was a Rans S-20 Raven that he built, which is powered by a Rotex engine. The S-20 is an American homebuilt aircraft designed by Randy Schlitter at Rans Designs of Hays, Kansas. It was first introduced at AirVenture in August 2013 (https://www.rans.com) 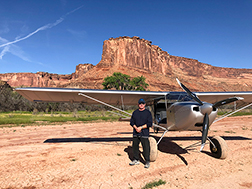 A special feature to Glen’s Rans S-20 is the tundra tires he installed, which enables him to land on rough terrain. And who doesn’t want to venture out to some neat back-country airstrips and land on rough terrain? Glen sure does! His excitement for adventure flying really came through when talking with him and his buddies!

Glen currently owns four airplanes, but has owned several others over the years, including a Rans-6 and Rans-9; a Pitts Special; and a Piper J-3 Cub. 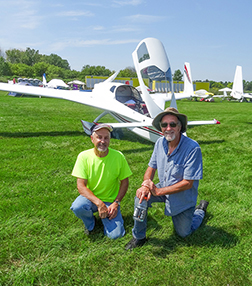 My next interview was with Nick Ugolini of Charleston, South Carolina, who flew to Oshkosh in his Nat Puffer-designed 6ZY MK-IV “Cozy” he built himself. The Cozy is constructed of fiberglass and foam, sandwiched together. It’s a four-seat/single-engine aircraft, which is built from plans using basic raw materials. It is not a kit aircraft, although many of the smaller parts are available prefabricated. The Cozy is similar in design and construction to the two-seat Rutan Long-EZ, from which it is derived, with approval from Burt Rutan, that is. The aircraft is designed as a high-speed cross-country aircraft. VFR or IFR equipped…that’s up to the builder! 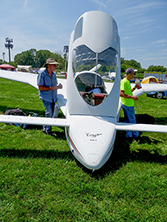 Nick built a lot of wooden model airplanes as a kid, and in addition to the MK-IV, he has built a three-seat MK-III, also designed by Nat Puffer, and a Rutan VariEze.

All these aircraft are incredibly fast and fuel efficient with speeds in the 165 to 200 mph range, depending on the engine installed and their gross weight.

I hope to meet Mr. Rutan someday and look forward to reading his memoirs once they are written and released. His accomplishments in aviation are many, including designing the Beechcraft Starship and Voyager, and to think he got much of his inspiration by attending EAA AirVenture Oshkosh. 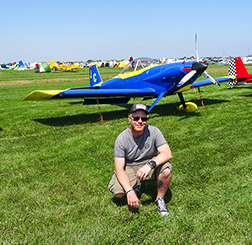 Next on my world-wind series of interviews was with James Walsh from Chicago, Illinois. Since James was a little boy, he always wanted to fly his own airplane to EAA AirVenture. He finally got his wish this year when he flew his RV-4 to Oshkosh. James has owned his RV-4 since 2019.

James served 10 years in the U.S. Navy and his job today is flying a Bombardier Global jet for a family. In describing his career as a personal bizjet pilot, James explained that there are two crews consisting of two pilots each, so there’s always pilots available 24/7. How cool is that? 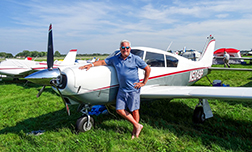 For my final interview of the year, I spoke with Dave Byers of Franklin, Indiana.

This was Dave’s second trip to AirVenture in his gorgeous 1958 Piper PA-24 Comanche, which he has owned for 6 years.

The reason Dave got involved in aviation is because his cousin owned an airport. Dave is now a captain for United Airlines flying the Boeing 787 “Dreamliner,” which he says, “Is truly a dream to fly!”

Well, I hope you guys and gals enjoyed my article highlighting some of the people I met at EAA AirVenture Oshkosh this year. “Aviation is an equalizer… It doesn’t matter how much money you have, who you are, what you do or did for a living, or what you fly… It’s about having fun!” (James Walsh).

Many thanks to everyone I interviewed. Your support and words of encouragement mean a lot to me.

And thank you, EAA CEO and Chairman Jack Pelton and staff for providing free admission to youth 18 years of age and younger, so that we may explore the world of flight!

Until EAA AirVenture Oshkosh 2022, July 25-31, this has been Easton, The Kid Reporter, over and out!

EDITOR’S NOTE: Easton is 12 years old and active in sports, playing football, baseball, and basketball. He holds a first-level Black Belt in karate and has been attending EAA AirVenture Oshkosh since before he could walk. One of his many EAA experiences was watching the night airshow in 2010 when he was 2 years old and personally meeting EAA Founder Paul H. Poberezny that evening. The preceding interviews were done at random on the fly!