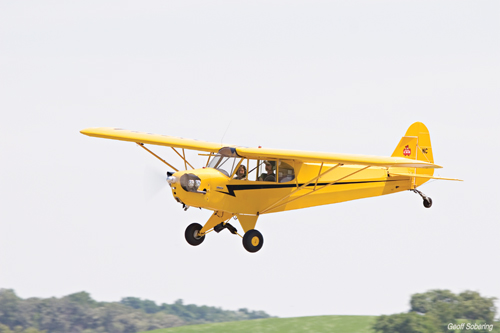 A pilot writes, “a very prominent flight instructor used to comment to me while getting proficiency training in my Cessna 182, that he could tell that I had “tailwheel” experience because I knew how to land an airplane in all kinds of conditions. Do you agree that tailwheel pilots make better tricycle aircraft pilots, than pilots without tailwheel experience?

Tailwheel airplanes are not necessarily more difficult to fly than tricycle gear airplanes.They are just less tolerant of sloppy airmanship.The main reason for this intolerance is the location of the main landing gear ahead of the center of gravity (C.G.). This characteristic requires the pilot to align the flight path, longitudinal axis*, and the runway simultaneously during every take-off and landing. When these are misaligned, Newton’s First Law causes the C.G. to continue in the direction it is headed. If immediate correction isn’t initiated, the pilot will experience the exciting maneuver “taildragger” pilots affectionately call the “ground loop.” If you want to experience this phenomenon without wrecking an airplane, take a child’s tricycle and smoothly push it backwards. It will generally track straight. However, if a turn begins, the turn will continue to amplify. If it is pushed hard enough, the tricycle can eventually tip over.

In a tricycle gear aircraft the C.G. is ahead of the main gear. The tricycle design inherently has the opposite reaction whenever the airplane is misaligned. Newton’s Law still applies here, but has the opposite effect for the pilot. The tricycle actually straightens the airplane out for the pilot! If you want to experience this firsthand, take a child’s tricycle and smoothly push it forward. It will track generally straight.

The tricycle airplane is a tolerant instructor with lower standards. The tricycle airplane actually helps the student straighten out every slight misalignment during landing. This happens every time, without CFI assistance or acknowledgement. Students learn to ignore alignment cues, unless they are major.

As the tricycle gear airplane is sitting on the ground, its pitch attitude is set. Any readjustment required for takeoff or landing is in the direction of normal rotation: nose up… never nose down. Because the tailwheel airplane requires the tail to be raised or lowered during takeoff and landing, tailwheel pilots are forced to learn proper pitch control techniques.

Takeoffs require the tailwheel pilot to establish the proper pitch attitude by raising the tail as appropriate: tail-high for a stiff or gusty crosswind; or tail-low for a soft/short field. This requires more action by the pilot. Yoke forward until attitude is set, then let the airplane fly off when it is ready.

While raising and lowering the tail during take-off and landing, a tailwheel pilot must be smooth to avoid the gyroscopic effects of the prop. A tailwheel airplane has a greater surface area behind the main landing gear, which increases the weathervaning effect in a crosswind. The pilot must anticipate crosswind weathervaning and the turning tendencies of torque and P-factor.**

Most tailwheel airplanes offer the pilot two landing techniques: the 3-point and wheel landing. The 3-point landing is accomplished when the airplane touches all three (3) wheels simultaneously, is at or near stall speed, and the stick is in the pilot’s gut. It’s used for short and soft fields. The wheel landing is accomplished when the airplane is flown onto the runway and the main landing gear touches before the tailwheel is lowered. This will often require forward stick/yoke after touchdown. Stiff gusty winds, improved visibility, and increased control effectiveness are reasons to perform wheel landings. Wheel landings require thorough understanding, practice, and proficiency.

* longitudinal axis (the axis which extends from the nose to the tail).

** The FAA defines P-factor, also known as “propeller effect,” as the tendency for an aircraft to yaw to the left due to the descending propeller blade on the right producing more thrust than the ascending blade on the left. This occurs because of the tailwheel airplane’s 3-point attitude in relation to the relative wind.