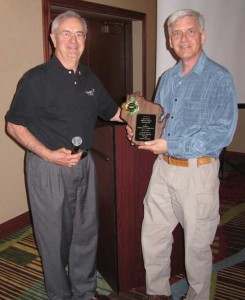 “Founded in 1946 by the late Howard Morey, Morey Airplane Company’s reputation in “flight training” is internationally known and respected, and all departments follow the Morey Airplane Company tradition of excellence,” said WATA board member, Bruce Botterman, who presented the award to Morey.

“To be selected for this prestigious award, a business has to provide quality service to both the local community and aviation customers, and Morey Airplane Company has done this,” said Botterman.

“In addition, Richard Morey saw through the development of the new Middleton Municipal Airport – Morey Field, and has proven himself effective in working with city officials and airport tenants as airport manager.”

Richard Morey is a third generation owner of the business, succeeding his father Field Morey, and grandfather, Howard Morey, both of whom have been inducted into the Wisconsin Aviation Hall of Fame for great feats and accomplishments in aviation. Howard Morey was the first chairman of the Wisconsin Aeronautics Commission, president of Wisconsin Central/North Central Airlines (1953-54), and the first manager of what is now Dane County Regional Airport. He later founded the airport, which is now Middleton Municipal Airport – Morey Field.

Richard Morey is a graduate of Blackhawk Technical College in Janesville, and grew up at the airport, working in each of its five departments. Morey is a professional pilot, flight instructor and licensed aircraft inspector and technician.

Morey Airplane Company hosts the annual fly-in breakfast for the community to be held this year on July 13 from 7:00 am to 12:00 noon, which features airplane rides and display aircraft. Chapter 1389 of the Experimental Aircraft Association (EAA) sponsors the fly-in each year and the public is invited to attend (www.MoreyAirport.com).