Real Instrument Pilots Do Not Need Autopilots or Glass Panels

When you read the title of this article, I am sure it threw up a flag and got your attention, but please read on. I also have some more information on ADS-B that I researched in the previous issue.

Oh how things have changed since I got my instrument rating some 45 years ago. No, we did not have autopilots, and glass panels were not even in the comic books or science fiction journals, yet. It made us better pilots, and we had to acquire skills that are often overlooked by many flight instructors teaching the instrument rating today. I cannot say, however, that not having these tools available to us made instrument flight safer back then. In talking with some old-time airline pilots, I found out that some of them did not have autopilots, either. With aviation today, I cannot imagine hand flying a jet airliner at high altitudes, close to the “coffin corner,” without one. What I am saying is that many pilots whom we see in our recurrent instrument training programs would die if they lost their autopilots in hard IMC (Instrument Meteorological Conditions). Few pilots today could properly enter and fly a holding pattern without an autopilot or flight director, including professional pilots.

A number of years ago an airline pilot came to me for some dual in a Cessna 310 to learn how to fly a holding pattern. He indicated that the automated system and flight director in the Boeing 747 he flew did holding patterns for him, and he had not done one manually for many years. He was correct that he did not know what to do and proved it by flying the pattern backwards. All missed approach holding patterns are stored in the database of the Garmin 430/530, and both the Avidyne 540 and Garmin 480 allow you to custom design a holding pattern of any size and that can be flown at any location as programmed by the pilot.

So how does the title in this issue apply? Pilots who learn to fly without an autopilot develop a skill for flying that they cannot acquire if they had the autopilot and used it as a crutch. A pilot’s brain is somewhat like a computer in that it has limits on how much data it can process; however, the more times it does a task, the less brainpower that is required to do that task.

It is very important to develop a good instrument scan, thus it requires less brainpower to do that task and by using memory joggers and learning how to prioritize tasks, it makes flying without an autopilot doable.

You are being vectored for an ILS approach and you are hand flying the approach. ATC gives you a call with your approach clearance: “Bonanza 36 Victor, turn left 040, maintain three thousand five hundred till established on a segment of the approach. You are cleared for the ILS 36 approach to Madison.”

As you gasp and swallow, and you try to read back this clearance as given, the aircraft banks right, the nose drops, you are way off your heading and altitude, and as you recover, you see that you are way below the assigned altitude and heading 120 degrees, and realize you have messed up the read-back, as well.

This is not a fictional example; I see it all of the time in flight training and recurrent training. Many of us who talk on our cell phone while driving to a place we have been before, have realized that we missed a turn back there somewhere, but in a case where the route is very common, you make all of the correct turns without thinking. The pilot in this case who has not developed a good instrument scan, does not have the additional brain-power to read back the clearance, has a brain overload, and loses control of the airplane.

It is important to prioritize tasks, and as I was writing my column for this issue, the telephone rang. It was from an instructor friend of mine. He wanted to tell me the story of a pilot who was taxiing for take off while programming his route into his iPad, and ran off the taxiway, went down into a ditch, collapsed his nose wheel, and damaged the prop. This was a $50K mistake, and it goes to show the importance of prioritizing tasks.

Back to the basics was one of my topics in the last issue of Midwest Flyer Magazine, and there are many little secrets that can help you. 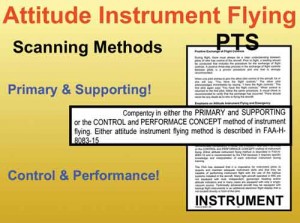 First, it is necessary to develop a good instrument scan, and it needs to be practiced. In the practical test standards, there used to be only one suggested method of doing this, and that was the “Primary & Secondary Concept,” however, the practical test standards have been revised to include a second method, “Control & Performance Concept” (Fig. 1). I have been teaching the “Control & Performance Concept” since the early 1990s with great success. We will discuss this method and its benefits in future issues of Midwest Flyer Magazine.

There are many memory joggers used in flying, and the one most familiar to the instrument pilot are the “5Ts.”

By using these memory joggers, it allows pilots to have a logical order for performing tasks in the instrument flight environment.

Before leaving this topic, I would like to relate an experience from some years ago when I went with an instrument student to take his flight test. As we were walking into the examiner’s office, I reminded my applicant of the importance of using the “5Ts.” A moment later, the examiner walked in the door with a pilot who had just completed his flight test. We both caught the conversation with the pilot examiner saying, “If you had remembered to use the 5Ts, I would be giving you a white slip today instead of a pink one.” This made quite an impression on my student, and he did remember them and passed the checkride.

Speaking of passing one’s checkride, I would like to congratulate Brandon Baker of Minneapolis, Minnesota on becoming an instrument rated pilot on September 2, 2016, and he did so without a glass panel, GPS, flight director or autopilot. Not only did he pass the flight test, he rivaled the best autopilot as I observed four (4) perfect approaches in a row with not more than one dot deviation on the localizer or glide-slope. Brandon is the nephew of AOPA President & CEO Mark Baker, and he will do great in his aviation career. 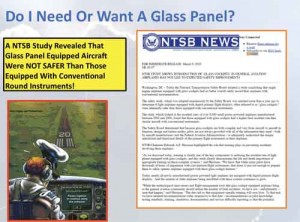 In a study that was done by the National Transportation Safety Board (NTSB) several years ago, they addressed the higher fatal accident record of aircraft equipped with glass panels verses the “six pack” (Fig. 2). In following the recommendation of the NTSB, I would be interested to see if a more recent study has been done to show a reversal in this trend following their recommendations. I will report any new findings in the next issue of Midwest Flyer Magazine.

Since my comments on ADS-B surfaced in the last issue, questioning if the system is truly ready, I have had a chance to talk with numerous pilots and a very recently retired air traffic controller and several avionics shop owners on the subject. I also had a chance to do some research on my own as to the success of the current ADS-B program, and you may find this interesting. What I found in my research even before the last issue went to press was that there is a “Generation Three” ADS-B under development and operational. It is called “ALAS,” which stands for ADS-B Link Augmentation System, and I found it by accident. It is an all-satellite based system as my caller described, as noted in my last column. Why many of us, including myself, have not heard of it earlier is amazing, as it seems someone wants to keep it quiet. Those interested may go to a YouTube for a short video on how it works and why it works better than the system that is being required by the year 2020. Visit https://www.youtube.com/watch?v=Fj5EAK8ltTA.

In talking with pilots who have already installed ADS-B equipment, many of them have indicated that they, too, have seen ghost images and traffic that disappears for a short time, then reappeared or never shows up again. We all agree that ADS-B weather is quite useable, but not nearly as good as “XM Satellite Weather.” It makes sense that if using satellites for traffic is as good as XM Satellite Weather is for weather, that using satellite technology is the way to go for traffic as well. If this is the case, those who have purchased expensive ADS-B equipment will have a dinosaur in a few years, as it would not be the first time a government agency made a mistake.

I can sight Loran C, Traffic Information Service, Microwave Landing System, Transponder Landing System and Obama Care, as a few examples. At this point it is pretty much the consensus of most of the people I have talked to that there is a problem and the FAA is working on a fix.

Till the next issue, fly safe!