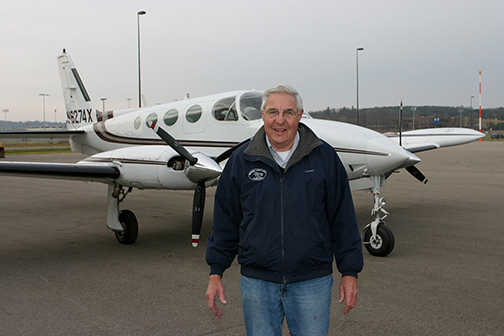 One of the unique aspects of general aviation is the people who have made it a career. Usually these are people who, for their own reasons, have no desire to fly or work for the more regimented airlines. Often, they fly light aircraft, be they twins or singles. They can be found at airports of all sizes and locations. Often, they have an Airframe and Powerplant license, in addition to pilot ratings appropriate to the work requirements enabling them to fly.

These are people who started flying when support information was sparse at best. Weather was a reasonable guess, and a lot of times accurate to the extent that it was thought there would be thunderstorms, but where and exactly when was a matter of eyeball judgment. It was not at all unusual to fly an airplane with no deicing or prevention equipment, and to do so in weather that could produce ice.

As time inevitably moves on, these pilots are retiring with a resultant loss to the industry of their accumulated experience. Thankfully, this level of experience will not be so critical in the future since technology, for both flight and weather, have been improved. However, when things go south, the knowledge acquired from years of experience, could save lives. Further, recent changes to FAR Part 135 that governs charter operations, have removed some ambiguity in decision-making, thereby relieving pilots from having to fly in adverse conditions, regardless of the demands of frustrated passengers.

One of these aviation professionals is Rollie Mack of Morey Airplane Company, Middleton Municipal Airport – Morey Field (C29), Middleton, Wisconsin. Rollie was hired by Howard Morey in 1958 and remained with the company through three generations of the Morey family, as an aircraft technician and charter pilot. He holds an Airframe and Powerplant (A&P) Certificate with Inspection Authorization (IA), and an Air Transport Pilot (ATP) Certificate. Rollie is not really sure what his total flight time is, but says it’s probably more than 12,000 hours.

Like many such pilots, Rollie had a separate source of income. For him, that source was from farming, devoted principally to livestock.

Rollie and his wife, Joan, raised four children, and in addition to operating his home farm, he helps his daughter and son-in-law with a farm adjacent to his, bringing the total number of acres they farm to 160. 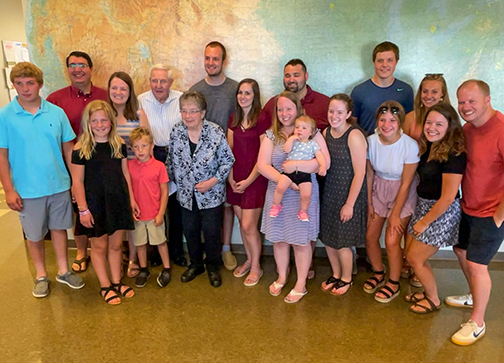 The mechanical aptitude required of farmers may have contributed to Rollie’s success in aviation, and his personality always gave the impression that he was competent and unflappable. Howard Morey was always impressed with Rollie’s abilities and his willingness to stay with the job until it was completed!

Of course, Rollie has accumulated his share of “interesting” experiences. He’s reticent to talk about them because that would be like bragging, and he doesn’t like when people brag.

There is a story of Rollie returning home from a charter flight during the winter and was at an altitude that kept him out of icing conditions that another pilot was experiencing in the same area, but at a higher altitude. The pilot of the other aircraft was requesting a lower altitude from Center, so the controller assigned Rollie a higher altitude ostensibly to allow the other pilot to descend out of the icing conditions. Rollie’s response was a calm and respectful, “No, I don’t think I’m going to do that.” So, the controller instead assigned Rollie a different heading to allow the other pilot to descend to the same altitude. Rollie’s decision may have required the controller to work a little harder by considering alternatives, but in the end, it was the safest course of action for all concerned.

Rollie flew both Cessna 310s and Cessna 340s, but C-340s more so toward the end of his flying career.

In addition to flying charter at Morey Airplane Company, Rollie flew corporate for two area businesses. Rollie also maintained those aircraft, so he became very familiar with them, and as a result, never bent an airplane in all the years he flew.

Two events remain with me with respect to having worked with Rollie Mack. The first is when the heater in a Cessna 310 would not work on a day when the outside air temperature was about 10 degrees above zero Fahrenheit. We discovered this during the pre-takeoff check.

Calling in to see if anyone had a suggestion, Rollie came out to the aircraft, and while the engines were still running, he crawled into the nosewheel well to see if he could fix it. He needed the engines running to try and coax the recalcitrant heater into functioning but without success. Rollie did, however, determine that he needed to order a new part. Since the heater was not a flight critical issue, we continued the flight to Atlanta. When we returned several days later, the part had arrived, and Rollie repaired the heater.

The second event was when the company I worked for retained Rollie to fly charter in a Cessna 340. My fellow employees were nervous about flying in a different aircraft, as they were used to flying in a larger aircraft, operated by a different charter company. But when Rollie showed up with homemade baked goods that Joan had made for them the night before, the passengers felt more at ease. Rollie’s calm and confident demeanor, and his ability to keep passengers informed, was the frosting on the cake! 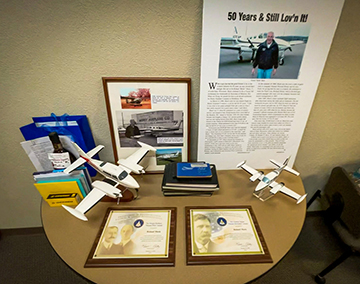 Rollie Mack’s retirement is understandable and well deserved, but he will be missed by employees and customers. He and others with equal experience and tenure, created the foundation upon which today’s charter and corporate operations are built. We owe them a debt of gratitude for a job well done!