In this issue of Midwest Flyer Magazine, I would like to revisit a topic from several issues back, “The Procedure Turn” and also finish our series flying the approach on the Garmin 430/530 boxes. I have received numerous emails and phone calls on Automatic Dependent Surveillance-Broadcast (ADS-B) and will revisit this topic as well.

Several issues back, I did a series on the “procedure turn” and the five criteria needed not to be required to fly them. It appears that there is still some confusion on this topic among many professional pilots and air traffic controllers, as well. As a quick review, I have listed the five criteria without greatly elaborating on them:

1. You are getting radar vectors.
2. You are in a holding pattern*.
3. You are on a no-procedure turn transition.
4. You are flying a DME arc.
5. No procedure turn is shown on the chart.

For more information on these criteria, please consult back issues of Midwest Flyer Magazine (August/September 2013 & October/November 2013), which are available at www.MidwestFlyer.com, if you do not have them. 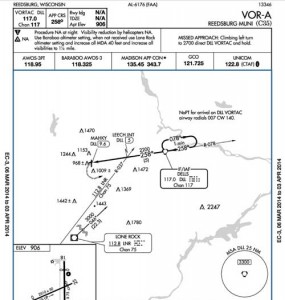 There seems to be some confusion on doing a procedure turn (course reversal) when the heading being flown to the fix lines up with the inbound approach course. The “TERPS-ters” (the people who write the TERPS) when laying out the approach will designate that no procedure turn should be made as they have in (FIG 1) of the VOR A approach to Reedsburg, Wisconsin (C35). This is really a NO Procedure Turn Transition (NOPT), and I refer to it as a “blanket transition” (MJK) as it covers a rather broad area. In this case, we would be approaching from the 007-degree radial of the DLL VOR clockwise to the 140-degree radial. 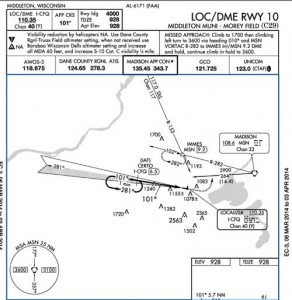 If we take a look at a similar approach (FIG 2), the LOC/DME 10 approach into Middleton Municipal Airport – Morey Field (C29), we do not see a transition of this type shown on the chart. With guidance from the Aeronautical Information Manual (AIM) (section 5-4-7i) and the Air Traffic Control (ATC) Handbook (section 4-8-1), to properly do the approach as designed by the TERPS-ters, it would then be mandatory to do the racetrack procedure turn as shown. The ATC handbook says the following: “If a hold in lieu of a procedure turn is depicted and a straight-in area is not defined (e.g. “No PT” indicated at the fix), the aircraft must be instructed to conduct a straight-in approach if ATC does not want the pilot to execute a procedure turn. If you read the series I wrote on the procedure turn mentioned above, you will see that getting radar vectors for the straight-in approach would give you a legal and preferred avenue to save you time on the approach and go straight in.

So what would it hurt or would there be any danger to the pilot if he did not do the procedure turn on the Middleton-Morey LOC 29 approach? Probably not, but many times I cannot figure out some of the things the TERPS-ters do when designing an approach.

Let’s take a similar approach in mountainous terrain, and the approach could be disastrous and fatal as in the case of Cirrus N893MK into Santa Clara, California (KRHV). There were errors made in part by both the pilot and ATC that were all contributors to this accident. Keep in mind that there are three ways to get established: an approach from over an initial approach fix IAF/feeder route, direct to an intermediate fix (IF) in certain cases, or vectors to final.

There is one more item for the pilot to consider when making a request as I had mentioned in a previous column. There is a difference between “direct to” and “radar vectors.” When the pilot makes a “direct to” request from ATC on an IFR flight plan, the pilot is responsible for terrain clearance and ATC is responsible for traffic. On a radar vectors’ clearance, ATC is responsible for both traffic and terrain separation. This accident is pointed out in one of my favorite instrument flying books, “Instrument Flying Update” by John Eckalbar. If you don’t have this book, consider it a must for your library. It will help clarify a lot of confusion for you on approaches. 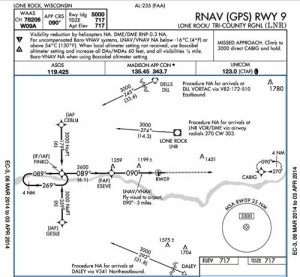 On the continuation from our last issue on flying the GPS approach using the Garmin 430/530, we will continue prior to crossing ESEVE (FAF) (FIG 3). I would like to mention some aircraft control issues to consider on this or any approach. Airspeed control is one of them, and slowing the airplane down is important. In training a pilot for his airline transport pilot (ATP) certificate some years ago, I remember reaching glide-slope intercept in a Beech Baron at 180 kts. We were above gear and flap speed and no power reduction at that time would allow us to slow down and maintain the glide-slope.

Prior to reaching the Final Approach Fix (FAF), I memorize several items on the chart for a possible missed approach. They are decision height (DH or DA) and the initial part of the missed approach only. Every missed approach I can remember begins with a climb, which can be be straight ahead or with a left or right turn. If the approach is a non-precision one, the minimum descent altitude and missed approach point need to be memorized. I make it a point to never look at the chart once I cross the FAF unless in an emergency. Your concentration needs to be on flying the airplane!

The emphasis on this approach is the use of the Garmin 430/530. So what do we do with the box? If we are able to land, the button pushing is over as well as the flight. Should the option of the missed approach be necessary, we have some important steps to take with the Garmin box, and I see many errors that occur here.

My procedure is to fly the airplane first; power up, pitch up, positive rate, gear up, and if flaps were used, retract when able. The Garmin box will indicate the missed approach point by the to-from flag going from to-from when passing the missed approach point. I see many pilots go to the GPS and push the Omni Bearing Selector (OBS) button before cleaning up the airplane on the missed approach, which could be a disastrous mistake. It is important to climb to the first altitude specified on the approach chart before pushing the OBS button on the missed approach. If the holding fix requires a turn and you push the button too soon, you can confuse the sequence or worse. If you are flying with the autopilot and the turn is commenced too early into high terrain, it could be disastrous.

If the events were sequenced properly, your autopilot will take you to the missed approach holding fix and nothing more will need to be done by the pilot except leveling at the holding altitude. If you have GPSS (Roll Steering), the autopilot will do the proper hold entry and remain in the hold until you are ready to leave with no additional pilot input. You will see the GPS go into “suspend mode” on its own during the hold entry process, but this is normal. This is the conclusion on my series of GPS approaches using the Garmin 430/530 with WAAS.

The last topic, Automatic Dependent Surveillance-Broadcast (ADS-B), will be covered in detail as a series in my column beginning in the June/July 2014 issue of Midwest Flyer Magazine. I have been receiving numerous emails and phone calls on what should be done in regards to ADS-B. I have reviewed several ADS-B units in previous issues for consideration. My recommendation that I am giving to pilots has been twofold. There will be a lot of new units coming out between now and the deadline for compliance in 2020. You can wait and see, as I am sure the price on the high priced units will drop, or purchase an inexpensive unit now to enjoy the benefits of the free weather (WX) and traffic now.

I am seeing WX-only boxes in the $600 price range, and units with WX/Traffic and ADS-B out as low as $1500. I will be doing an evaluation on several new units starting in the next issue.

May the worst flying winter be in the past when you read this issue. Tailwinds and warmer WX are instore!!!